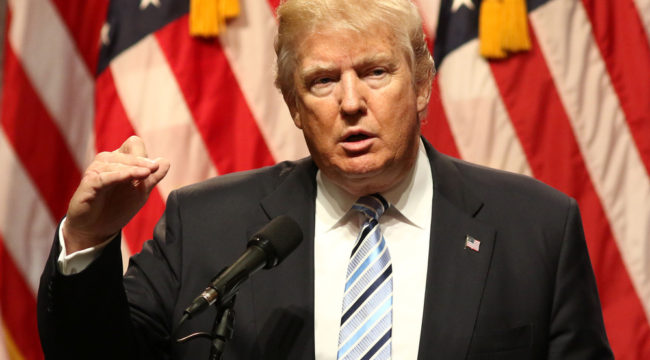 The Trump Reflation Trade: The Biggest Short Ever

The Trump Reflation rally will soon prove to have been a giant head fake. It is based on pure hopium and for all practical purposes it was ginned up in the wee hours of election night in the bowels of Wall Street.

After all, what better way to call the retail sheep to one more slaughter than to reverse the market on a dime — by more than 1,000 Dow points in a few hours after the shocking election of Donald Trump as the nation’s 45th president.

To be sure, we welcomed Trump’s election because it amounted to an impeachment of the existing Wall Street/Washington ruling elites. It will throw Imperial Washington into bitter strife and dysfunction. Within months the looming $20 trillion debt ceiling expiration and lapse of the U.S. economy into outright recession will finally put an end to the nation’s kick-the-can fiscal fantasy.

By this time next year, in fact, Uncle Sam’s ledger books will again be spewing trillion dollar annual deficits. The ballyhooed Trump Stimulus will have been DOA and long-forgotten. What will be happening instead is a raging political conflagration over government shutdowns and emergency patches to extend the Treasury’s borrowing authority for a few months at a time.

What we are talking about here is a fiscal chickens-coming-home-to-roost scenario. That’s what Trump’s election really portends.

After all, even a political Houdini would not be able to govern when trillion dollar deficits again implode on the Imperial City. So how can it be expected that a mercurial outsider — tweeting up a storm against the very beltway political crooks and racketeers that he would need to actually attack the nation’s monumental fiscal and economic challenges — will be more than an incendiary disrupter of the status quo?

Indeed, in the present context the Democrats will go to war on Day One if Trump follows through on his campaign promise to repeal the disaster known as Obamacare and attacks the symbols of identity politics and political correctness on which the contemporary Democratic Party is built.

Yes, Chuck Schumer would like to make a deal for train loads of infrastructure pork for New York, but this isn’t 1981 and he isn’t Tip O’Neill. The idea that there will be any bipartisan cooperation on a fiscal stimulus package is a pipe dream.

In fact, what today’s talking heads can’t remember is that there was no bipartisan compromise even in Reagan’s time; that’s a revisionist myth peddled by worshippers of the Gipper and Chris Matthews on behalf of his former boss in the House Speaker’s office.

The famed Reagan tax cut of 1981 was steamrolled through the House by an unstable GOP-Boll Weevil coalition that only succeeded by a hair owing to public sympathy for Reagan after the assassination attempt. The Democratic majority fought it tooth-and-nail all the way.

The so-called “bipartisan compromise” happened only in its fiscally disastrous aftermath. That is, when bills to increase taxes and recoup upwards of 40% of the original Reagan tax cut had to be passed during 1982-1984 to stem the red ink hemorrhage. Even then, the national debt tripled on the Gipper’s watch, rising from $930 billion at the end of Jimmy Carter’s big spending tenure to $2.6 trillion in December 1988.

At the same time, there is not a remote chance that the various factions within the GOP gang of neocons, social cultural warriors, tax-cut true believers and plain old pork barrel politicians will be able to agree and pass on a partisan basis anything that remotely resembles big fiscal stimulus envisioned by Wall Street.

In fact, Trump correctly identified the Big Fat Ugly Bubble which hovers over Wall Street during the campaign, and he also suggested that it will inexorably splatter. What he didn’t say, of course, is that his flukish ascension to the White House will function as the angel of financial mercy.

So the S&P 500 at 2213 and 24.5X reported earnings is about as irrational as it gets. There is virtually no upside reward from here, but the downside risk of political crisis and policy paralysis is immense and palpable.

Folks, the ruling establishment would not let Donald Trump govern — even if he had a coherent and reasonably plausible economic program. But he has only slogans, quips, bromides and warmed-over ideas about cutting taxes and building roads and bridges without the slightest clue as to how they can be financed without driving the Federal deficit skyward and bringing the reawakened bond vigilantes to the very gates of the U.S. Treasury building.

The truth is, financial markets are heading straight into a perfect storm of central bank failure, bond market carnage, a worldwide recession and a spectacular fiscal bloodbath in Washington. Investors should be heading for the hills with all deliberate speed.

Yet the day traders and robo-machines have been raging — tagging the stock charts at new highs almost daily — based on the preposterous delusion that the “stimulus” baton is going to be smoothly handed off from a Fed that is paralyzed and out of dry powder to a grand new “growth” focused Republican government in Washington.

For the reasons mentioned above that’s exactly upside down. There will be no functioning government or coherent economic policy in the next four years. That means no giant fiscal stimulus in the form of infrastructure spending and huge tax cuts, and no countervailing economic brake on the recessionary forces now overtaking the U.S. economy.

What will transpire is a fiscal bloodbath like never before in Washington’s history. The inherited $20 trillion debt ceiling is a ticking time bomb which is set to explode on its March 15 expiration and will throw Washington into turmoil before the vaunted 100 Days is barely started.

Moreover, when Trump’s advisors finally get around to doing the math, they will discover that there is already built-in an additional $15 trillion of new deficits over the next decade — before even a single dime of Trump stimulus is added.

Indeed, now that Trump has appointed two Wall Street speculators — Steven Mnuchin at Treasury and Wilbur Ross at Commerce — to lead his economics team, a renewed fiscal calamity is virtually certain. Neither have the slightest clue that Uncle Sam is truly bankrupt and that 3–4% real growth in a nation buried under $64 trillion of public and private debt is a snare and a delusion.

Here’s the bottom line: The stock market at 2213 on the S&P 500 is the shorting opportunity of a lifetime.