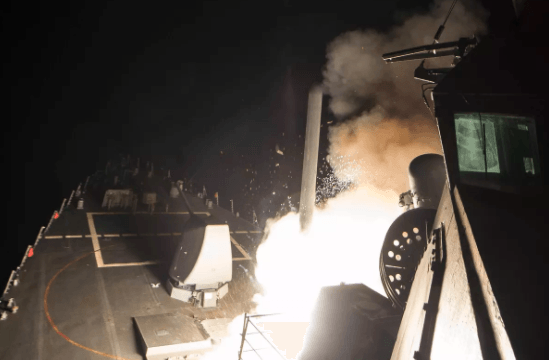 And Syria is short one airfield.

The airfield housed the planes that allegedly carried out Tuesday’s chemical attack that killed over 100 Syrian civilians and sickened over 500.

“It is in the vital national security interest of the United States to prevent and deter the spread and use of deadly chemical weapons,” said the president in justification of the raid. “There can be no dispute that Syria used banned chemical weapons.”

Apparently Trump has “evolved” on Syria. 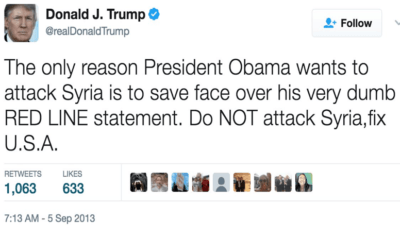 The “red line” of course being Syrian President Bashar al-Assad’s use of chemical weapons.

Obama accused Assad of ordering a chemical attack that killed over 1,000. Obama took Trump’s advice. The first part of it anyway.

The Donald again, a week before: 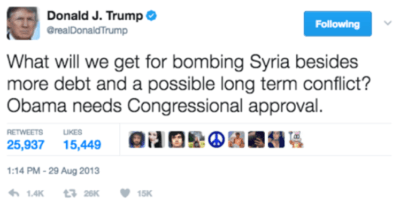 Trump did not seek congressional approval yesterday… to the best of our knowledge.

But heavy is the head that wears the crown.

And we suppose a man’s perspective changes once he puts that hand on the Bible and swears the oath.

What can you expect next?

Kevin Massengill is Jim Rickards’ partner in a new venture to capitalize on the coming wave of defense spending. He’s also a 20-year Army veteran and the former ranking defense industry executive for the entire Middle East. He knows of which he speaks.

We should expect retaliation by Syria’s President Assad. He could fire air defense missiles or launch an attack on U.S. personnel at Tabqa or other northern Syrian air bases or instigate an incident against the Israeli Golan Heights.

Regardless, Trump’s attack on Vladimir Putin’s “Man in Damascus” should do one thing…

Silence all the Russian hacking talk— at least for a day.

If Putin tried to get Trump elected in the hopes it would give him a free hand in Syria, that bet just came up snake eyes.

Kremlin spokesman Dmitry Peskov said Putin considers the attack an “aggression against a sovereign state in violation of international law.”

Does this mean U.S.-Russian relations go back in the freezer?

“Washington’s move deals a significant blow to the Russia-U.S. relations, which are already in a deplorable shape,” added the same spokesman.

Russian troops were apparently stationed at the targeted base.

But Washington had the good sense to warn the Russians of the impending raid.

And no Russians were killed, apparently.

Another Pentagon spokesman said that’s it for the attacks — as long as Assad behaves himself:

But we still don’t know how they’re so sure Assad ordered the attack in the first place. As we noted yesterday, a full investigation could take months.

But Trump struck while the mood was hot… while his blood was up.

And the President obeys him.

But that same president can make war on Syria itself — without anyone’s permission at all!

We stagger in contemplation of the fact.

And back in 2013, Citizen Trump evidently did too…

Yesterday’s attack comes as Trump hosts Chinese President Xi Jinping at Mar-a-Lago. And there’s plenty to discuss. Tensions are not only rising in Syria, but war clouds gather over Korea and the South China Sea.