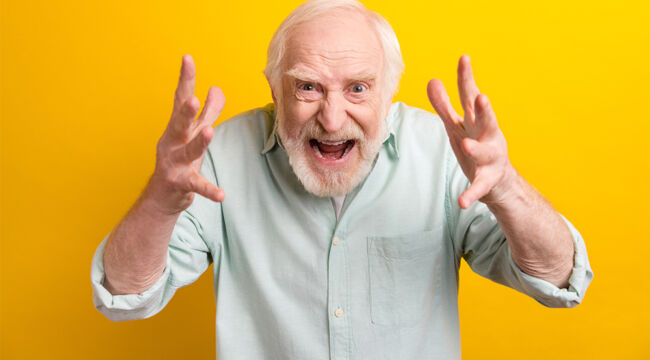 This Proposal Is Outrageous!

Two years ago, I was in a debate about a crazy idea being floated around at the time. It was about a new kind of tax, not on income but on wealth. There was already something legally sketchy about the idea.

It is pure punishment for increased value of assets even if they were never converted into income.

How can it possibly make sense that you should pay taxes on the market value of something that is not on the market and hasn’t been traded? You could even say the idea smacked of communism light.

Back then, the idea didn’t go anywhere. Today, it has been resurrected by the Biden administration in its new budget proposal. The messengers are currently engaged in all kinds of public relations subterfuge to hide the real nature of this tax increase.

So I’m grateful to The Wall Street Journal for clarifying that this really is a tax on wealth held:

It’s a new tax on Americans with $100 million or more in assets whose effective tax rate in any year is less than 20% of their income. But these taxpayers already pay a 23.8% tax rate on capital gains and 37% on ordinary income. The average tax rate for the top 1% of taxpayers in 2019 was 25.6%.

Here’s the Biden trick: The 20% minimum tax rate would apply both to ordinary income and the increase in the value of assets in a given year. This means taxing unrealized capital gains, which currently aren’t taxed until assets are sold and income is actually realized. In other words, this is a new tax on wealth—even if it’s structured differently than what Elizabeth Warren and Bernie Sanders have proposed. The White House is redefining wealth as income.

The Government Wins Either Way

Boom. That’s exactly it. Let’s say you own a 20% stake in a private company. It’s not income. It’s not even control of the company. It just sits there. Sometimes the value is up and sometimes it is down. Mostly, it is untested by the market.

Unlike this proposal, the IRS can determine that this is wealth and so you will be assessed a cash payment against its value, even if you are not taking it, even if you never plan to take it, even if your strategy is to pass it on to your kids.

Would citizens be given the opportunity to get a refund if the assets went down in value? The WSJ again:

It’s not clear whether losses in future years would be allowed to offset annual gains. So a taxpayer might have to pay a tax, say, of $2 million on an unrealized gain in 2022 of $10 million. But if the asset declined by the same $10 million the next year, tough luck. The government would win whether financial and other assets rise or fall.

Now, think about other forms of possible wealth increases. You are an art collector. You made good choices. It is heavily in demand but you have no intention to sell. Still, the government can now look at your collection and declare that it is taxable wealth even if you are merely looking at it.

For that matter, consider your home, which has so far been safe from the federal tax police so long as you don’t sell. It is actually possible that we could get federal assessments on home value and this would itself become a taxable event.

Government could do the same thing for collectable cars or coins. Or… wait for it… Bitcoin.

“It Is Impossible to Be Too Paranoid and Too Skeptical”

Imagine that: People who have only bought and never sold Bitcoin for years and years will now be forced to pay taxes against the rise in value even if they never realized that value. They may live like paupers. In fact, many do.

Some of the money-poorest people I know are actually bitcoin rich, and they don’t care. They look at every bit of property and money held as a cost: they would rather own digital assets.

This whole new strategy could be interpreted to go after them as well. Indeed, that might be the entire point!

As I was thinking through this, I wondered whether I am being paranoid and being too skeptical about government intentions. Then I remembered: It is impossible to be too paranoid and too skeptical. We are dealing here with a genuinely hostile and very stupid regime.

Despite the collapsing polls, despite rampant inflation, despite an unpopular war, they keep ramping up their attacks, almost as if they are determined to drive the economy into a statistical recession.

We’ve reported recently about the sky-high increases in food prices over the last several months. Our readers and people in social media are proving increases over three months from 20–60% in a huge variety of store products. They have the receipts. You do too.

The USDA just came out with an estimate of food price increases this year over last. Their top-line number made the headlines: 5%. Seriously. And they expect us to believe that. So I dug through the numbers a bit.

The number comes from averaging all prices in 2021 and comparing them to 2022. Looking more closely, you can run the numbers in a different way, from February 2021 compared with February 2022.

To be sure, I actually don’t believe any of these numbers. But they are considerably worse than the headline 5% that ended up in the newspapers. 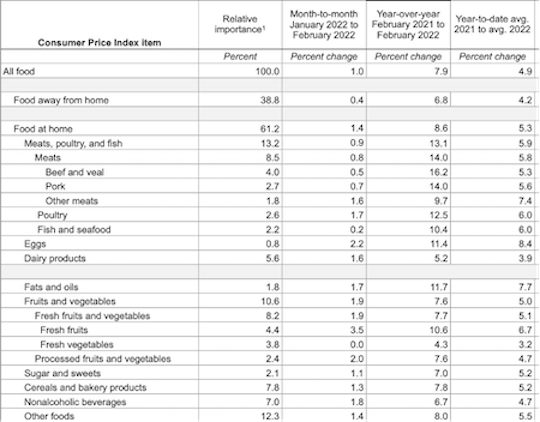 Most of my friends have used this inflation as a way of dramatically cutting back on eating. They are trying to lose the COVID-19 pounds they put on over two years. That’s a decent response but it only gets you so far for so long.

And there is every indication that this inflation is going to last and last. It is already in the double digits — but notice that no one is using that term. It feels like a cover-up because it is!

These various strategies make it appear that the Biden administration has no choice but to tack left as a political strategy. That would seem to be a political disaster but perhaps they feel like they have no other choice. They’ve already lost the middle. Might as well scarf up whatever votes they can find.

Meanwhile, the suffering is intensifying daily. Washington has put a target on savings, assets, innovation, profits or anything that smacks of prosperity. We live under a pillaging state, the main job of which is to search and destroy. And it is relentless.

The effect of all of this is to reward precisely what they are trying to discourage: finding safe-haven assets and disappearing as much as possible.

A prosperous society cannot be managed this way. It kills enterprise.