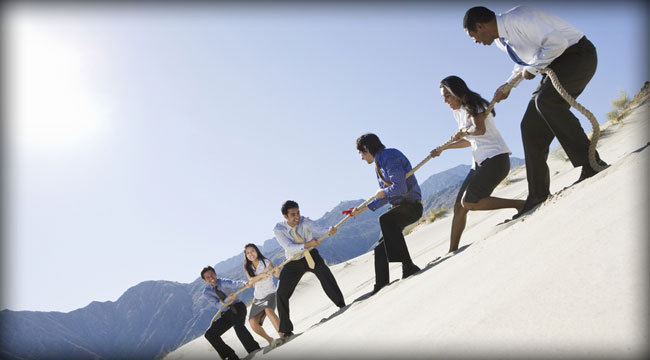 The Tug-o-War Between Government Meddlers and Entrepreneurs

[This article originally appeared in The Daily Reckoning on June 27, 2013]

“The problem with the French is… they don’t have a word for ‘entrepreneur.’” — rumored to have been uttered by President George W. Bush to British Prime Minister Tony Blair

“I get up in the morning,” our friend Juan Enriquez told us during an interview one day late in 2011, “I read the paper and see all the bad things going on with the debt, deficits, wars and the economy. Then, I step into a lab and see all the potential breakthroughs the scientists I work with are about to unveil.”

We began following Enriquez with a camera crew not long after the I.O.U.S.A. project had run its course. Among other eccentric pursuits, Juan helped finance the mapping of the human genome with Craig Venter.

Enriquez’s greatest fear at the time was that the political world would overwhelm the entrepreneurs — and the financial markets they depend on — before their discoveries could get put to good use. In fact, Juan’s bipolar view — debt, deficits and war versus inspiration, innovation and achievement — inspired the theme of this year’s Agora Financial Investment Symposium in Vancouver: “The Tale of Two Americas.”

“When you look at the world,” a Symposium regular said, expressing a similar sentiment, “you see one contradiction after another. Cyber warfare, rogue political leaders, random acts of terror, the militarization of police and expanded surveillance equipment and drone usage make for a future resembling an Orwellian nightmare.

“But at the same time, you can track breathtaking technological breakthroughs in oil exploration and new technologies that will revolutionize our health care, computing, automobiles, communication and agriculture… the many items we use every day.”

China is one such contradiction. For the past two days, we’ve focused on their economic slump. But despite the mandarin bear market, China’s innovators are making leaps and bounds. By 2015, they will graduate 17,000 postdoctoral fellows in science, math and engineering. That’s a 60% increase from 2010.

The German economist Joseph Schumpeter famously observed a similar bipolar disorder during the great credit bust of the 1930s.

“Lack of outlets, excess capacity, complete deadlock,” he wrote in Capitalism, Socialism and Democracy, “in the end regular recurrence of national bankruptcies and other disasters — perhaps world wars from sheer capitalist despair — may confidently be anticipated. History is as simple as that.

“The opening up of new markets, foreign or domestic, and the organizational development from the craft shop and factory to such concerns as U.S. Steel illustrate the same process of industrial mutation — if I may use that biological term — that incessantly revolutionizes the economic structure from within, incessantly destroying the old one, incessantly creating a new one. This process of Creative Destruction is the essential fact about capitalism.”

In his day, Schumpeter witnessed the triumphs of radio, frozen food, the gas stove and the traffic light — all technologies we currently take for granted. But his observations of “how” these innovations come about remain as relevant today as ever.

“Existing structures and all the conditions of doing business,” Schumpeter concluded, “are always in a process of change. Every situation is being upset before it has had time to work itself out. Economic progress, in a capitalist society, means turmoil.”

In an ideal world, entrepreneurs, innovators, the risks takers, would be free to embrace the turmoil at their own peril. But no… in the real world, we have the meddlers, the world improvers, (ahem) bureaucrats.

Yesterday, the Supreme Court ruled lawsuits against generic drug producers. “The nation’s most widely used medications,” reports the LA Times, “generic drugs, now carry a legal side effect: If you’re badly injured by one of them, you can’t sue the manufacturer.”

The seen effect? Generic drugs will stay low-cost. And the unseen effect? Good luck finding recourse if you swallow a pill from China that you think is Viagra but is really filled with yellow highway paint. Yes, you read that right — supply chains for drug companies are badly tainted.

Good luck finding a fix within the political system. Our money is on new entrepreneurs staying 10 steps ahead of the suits in D.C.

P.S. As the tug-o-war between government meddlers and entrepreneurs continues, the innovators are constantly coming up with new and interesting ways to further projects. Readers of the Daily Reckoning email often have unique opportunities to take advantage of these new projects. If you’re not yet receiving the Daily Reckoning email, sign up for free, right here, and find out for yourself.