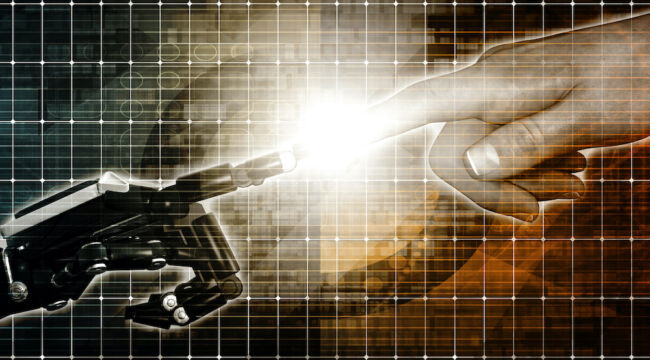 Back in April 1998, when the price was $14.47, I urged the readers of the then Gilder Technology Report to buy Amazon (AMZN).

Having gone public in 1997, Amazon had surged to more than a billion-dollar market cap.

Jeff Bezos himself had signed me up for the service at a dinner party at Microsoft scientist Charles Simonyi’s castle on Seattle’s Lake Washington. As the inventor of Word, Simonyi was a Microsoft star, and his shine reflected on Bezos.

During the next thirteen months, AMZN became a ten-bagger, reaching $148.38 by May 11, 1999. During the next two decades or so, with many ups and downs, its market cap surged more than a thousand-fold to over a trillion dollars. It is now at $1.54 trillion.

Because of what I now call the “Outsider Trading Scandal” — the SEC’s rule: “Don’t Buy Anything You Know About” — I did not buy my own list. So I gained chiefly from my own conference and newsletter business, which had more than 100,000 readers at its peak.

Among many early picks — from Intel and Micron to Applied Materials and Qualcomm — what interests me about my Amazon choice today was that I explicitly explained AMZN with my time theory.

Time-Prices as a Measuring Stick

Time, in my view, was the only significant scarcity in a world of free minds and imaginations.

Amazon, I said, was important because it was a “life-span extender.” It radically reduced the search and fetch times of buying books and other goods. Now, with far more competition, it is making similar gains in the provision of services, such as music and video.

In touting Amazon, I was near to defining time-prices, but I never grasped the full implications until a year ago when I discovered the historic Tupy-Pooley effect.

Senior fellow of Discovery Institute, Gale Pooley teaches at Brigham Young University and pioneers the economics of time-prices. A professor at Saint Andrews (UK), Marian Tupy is the co-author of Ten Global Trends Every Smart Person Should Know. Together, they are revolutionizing the methods and meanings of economic statistics by recognizing the centrality of time.

In the process, they demolish the theories of material scarcity that dominate modern economics.

Economics can neither measure nor explain human innovation while pursuing the materialist superstition: the flat universe theory of physical and chemical determinism and scarcity.

From the grip of a mechanical psychology of material incentives — rewards and punishments, pleasures and pains, greeds and fears — “social science” almost completely overlooks human action.

No doubt about it, we do experience scarcity. But it’s a scarcity of time.

Overturning the Science of Scarcity

Overthrowing Lord Robbins’ definition of economics as the science of scarcity — of allocating scarce resources to competitive ends — they begin by documenting the dynamo of abundance.

In the Tupy-Pooley formula, the time-price of anything is the hours it takes to earn the money to buy that thing. Time-prices are the only true prices. An index of economic progress, they combine in one number both the rise of incomes and the drop in prices resulting from the advance of innovation.

In the past, Pooley and Tupy have confined their measurements and observations to the years between 1980 and 2018. During this period, while the world population increased 73%, the prices of 50 key commodities of life, measured in the work hours to buy them, dropped 71%, and their abundance grew 518%.

Nowhere was evidence of “peak commodities” or unsustainable resources. As the population grew, commodities grew yet more abundant per capita. The human population does not burden the planet; it proliferates its bounties.

As Steven Pinker of MIT has documented in several books, the era between 1980 and 2018 has been a time of unprecedented peace, productivity, and increasing longevity.

But now Tupy and Pooley have uncovered a new series of commodity prices going back to 1960 (World Bank). For the U.S., they also compiled time-prices going back to 1919 (U.S. Bureau of Labor Statistics), 1900 (Canadian economist Davis S. Jacks) and even 1850 (also Jacks). Since the U.S. was what we now would call a Third World country in 1850, its 19th-century ascent is suggestive of the global trend.

What Pooley and Tupy found was that innovation proceeded with little disturbance through all these disasters. In the early period in the U.S., time-prices improved, on average, around 2% a year as workers had to spend ever less time to gain the crucial commodities of life.

Time-prices continued to improve, dropping some 3.4% per year compounded through the most recent period.

In my Information Theory of Economics, with wealth measured as knowledge, growth as learning, and money as time, wars and plagues could not stop the process of growth and innovation.

The current and recent COVID-19 lockdowns represent the most egregious public policy blunder of all time, ravaging economies around the world and causing a UN estimated (and probably exaggerated) 260 million starvation deaths in the Third World, with no detectable improvement in healthcare outcomes.

The carnage perpetrated by a clueless political class and its sanctimonious experts is possibly unprecedented in world history. But as long as the human heroics of invention, learning, and creativity are allowed to continue, the prospects for the world economy remain better than ever.

When the world fully absorbs the power of the Tupy-Pooley effect, investment and enterprise will never be the same again. It will make history.

In my view, the leading time-price company may still be AMZN. In everything it does, it is squeezing the time out of good and service delivery. This shrinks the time any worker needs to spend to earn the money to buy Amazon’s goods and services.

Both scarce and infinite, time passes in paradox. Money is tokenized time. In a fungible form, it expresses this ultimate scarcity in economic transactions.

Money has no ultimate limits beyond the creative imaginations of human beings. In a real market, banks expand it in response to the emergence of real opportunities pursued by their customers who accept the risks of failure and the trials of learning.

The quantity of money responds only to the creativity and investment of entrepreneurs with no government guarantees except the right to property and the freedom to surprise the world with new inventions.

Innovation is a process of learning accomplished through business and technological experimentation. The key metric is the learning curve — the tendency of costs to drop between 20-30% with every doubling of unit sales — the most widely documented data in business history.

Incorporating Pooley and Tupy’s time-price framework into corporate strategy would lead to metrics to measure the speed of innovation and hence to financial performance. A host of deep learning/AI tools are emerging today to help companies innovate faster.

Here’s the key takeaway: The history of time-prices is now about to detonate, with the impending ignition of Tupy and Pooley’s new book in 2021. Among the Tupy-Pooley effects will be a transformation of the understanding of money as tokenized time.

Tupy and Pooley’s most recent data opens up wide global horizons for investors that dwarf the political botches and blunders of 2020. What investors have to do is find the most innovative and creative entrepreneurs and support them.