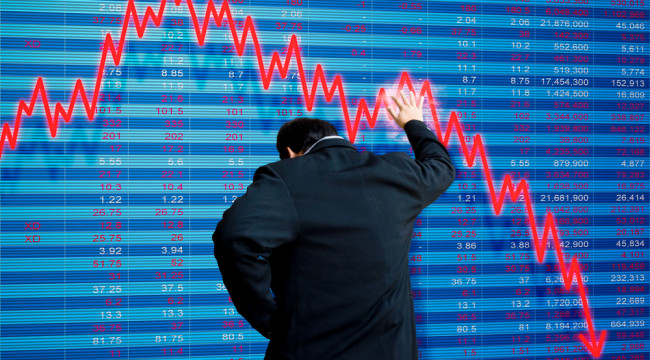 The Stock Market is About to Get Ugly

The market is in crash mode today, after a horror session on global markets overnight.

Where to start? How about at the apparent cause of all the selling?

Profits earned by Chinese industrial companies declined at the sharpest rate in four years in August as costs kept rising and product prices kept falling, according to official data that adds to signs of weakness in the world’s second largest economy

During August, profits of industrial companies dropped 8.8 percent from a year earlier, the biggest on-year fall since the NBS began monitoring such data in 2011.

This is just an excuse though. The media needs something to explain the plunge in commodity player Glencore’s share price and the ongoing liquidation across the commodities complex.

Let’s start with Glencore. The (former) commodities giant saw its share price plunge around 30% in London trade last night. BHP and RIO went along for the ride, falling around 5% each.

Glencore has a massive debt load. The fear is that its recently announced restructuring plans don’t go far enough to get it out of trouble. Last night’s stock price crash tells you that equity investors could be wiped out completely if the company enters a default scenario.

The cost to insure Glencore’s debt soared to record highs overnight too. If commodity prices remain weak, the company will not survive in its current guise.

Would the demise of a commodities pin-up company like Glencore be the final exclamation point on this commodities bear market? After all, it listed at the height of the boom in 2011…perhaps its disintegration will mark the bottom of the market?

But there’s no point guessing. Both BHP and RIO will likely fall to fresh multi-year lows today. That’s bearish. It tells you that the downtrend that has been in effect for years is still in force.

Buying into a downtrend is a high risk strategy. A stock might look cheap, but you don’t know how cheap it might become.

Commodities weren’t the only victims from the overnight sell-off. Junk bonds and biotech stocks also suffered heavily. It’s a sign of increasing risk aversion. This is how a bear market develops. Nervousness increases to a point where panic selling occurs.

Under the surface, what you’re seeing is not just a simple increase in risk aversion. It’s a growing concern about the health of the financial system and its ability to absorb shocks from the commodities bust.

Glencore is only a prominent example. There are hundreds of other companies, especially in the energy sector, who have issued large amounts of debt to finance their operations. That occurred on the assumption of much high commodity prices.

But it’s now approaching a year since the big collapse in energy prices got underway. Companies can deal with a momentary fall in prices by tapping cash reserves or ramping up production to push down per unit costs. We are at the point now though that low prices begin to cause pain.

It’s probably why the junk bond index looks like this…

As you can see, the recent collapse in the index just took junk bond prices to the lowest point in nearly two years. Junk bonds refer to any bond issue that doesn’t have an ‘investment grade’ rating.

The chart looks like a standard topping out formation. That is, you saw highs in June and August 2014, followed by a big sell-off. But risk appetite remained strong and the sell-off quickly reversed. The index attempted to make new highs in mid-2015.

But it was a sucker’s bounce. Renewed selling started up in June. It has been relentless ever since. It may be time for another hope-fuelled rally but the trend is definitively down.

In the midst of all this, you have an utterly confused US Federal Reserve. Their narrative is no longer the dominant one. In fact, no one is sure what its narrative is anymore. Do they want to raise rates because the US economy is strong or do they want to keep rates on hold because of concerns over international (and specifically China) weakness?

The market doesn’t know anymore. For so long investors confidently took their lead from the Fed. The Fed provided guidance and confidence…investors bought stocks. It was pretty simple.

Not anymore. The end of US quantitative easing and tightening monetary policy via the ‘jaw-bone’ (talking about the need to raise rates) has done enough to halt the bull market. It’s sent shock waves through emerging markets and now the effects are filtering through to the world’s major economies.

It’s the same problem as always. The Fed sets monetary policy based on domestic considerations but the US dollar is a global reserve currency. The Fed’s decisions have global ramifications.

If you take a big step back, what you’re really seeing here is the demise of the US dollar as the world’s reserve currency…the demise of the post Second World War international financial system. That might sound strange given the strength of the greenback against virtually every other currency.

But that’s just the point. Before it crumbles it will take all other currencies down first. This will cause havoc across financial markets…especially in the opaque derivatives space.

The world is in the process of losing its monetary anchor. And while no one knows how it will play out, right now, it’s starting to look pretty ugly.