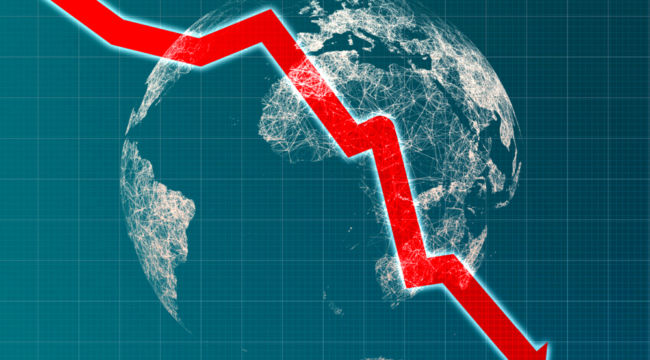 The coronavirus pandemic is a human tragedy. It’s also an economic tragedy, as the global economy is collapsing around us.

Second-quarter U.S. GDP may drop as much as 30%, which is a staggering figure. Many economists predict a third-quarter recovery, but there are still so many unknowns that it’s impossible to say.

It’s still too soon to say when America will reopen for business. And you can’t just flip a switch and return things to normal. That’s not how economies function.

Many industries may never recover and millions may be out of work for extended periods.

At the very least, we’re heading into a severe recession. And we could well be heading for a full-scale depression.

That’s not being alarmist.

The crisis will also accelerate the collapse of the dollar as the world’s leading reserve currency. So you need to prepare now. What do I mean?

The U.S. dollar is at the center of global trade.

The dollar represents about 60% of global reserve assets, 80% of global payments and almost 100% of global oil sales. About 40% of the world’s debt is issued in dollars.

The Bank for International Settlements (BIS) estimates that foreign banks hold over $13 trillion in dollar-denominated assets.

All this, despite the fact that the U.S. economy only accounts for about 15% of global GDP.

But the coronavirus crisis is creating a massive problem for foreign nations dependent on the dollar.

That’s because the world is facing a critical dollar shortage.

Many observers are surprised to hear about a dollar shortage. After all, didn’t the Fed print almost $4 trillion to bail out the system after 2008?

Yes, but while the Fed was printing $4 trillion, the world was creating $100 trillion in new debt.

This huge debt pyramid was fine as long as global growth was solid and dollars were flowing out of the U.S. and into emerging markets.

But that’s no longer the case, and that’s an understatement. Global growth was anemic before the crisis hit. Now it’s contracting rapidly.

If dollars are in short supply, China can’t control its currency and emerging markets can’t roll over their debts.

But again, you might say, isn’t the Fed engaged in its most massive liquidity injections ever and extending swap lines to foreign central banks to ensure they can access dollars?

Foreign nations are scrambling to acquire dollars right now. And that surging demand for dollars only drives up the value of the dollar, which puts additional strain on their ability to service debt.

When those debt holders want their money back, $4 trillion is not enough to finance $100 trillion, unless new debt replaces the old. That’s what causes a global liquidity crisis.

We’re facing a global liquidity crisis far worse than the one that occurred in 2008. In fact, the world is heading for a debt crisis not seen since the 1930s.

The trend away from the dollar was already underway before the latest crisis, led by China and Russia. Now that trend will greatly accelerate as the world seeks to eliminate, or greatly reduce, its dependence on the dollar.

That’s not just my opinion, by the way. Here’s what Eswar Prasad, former head of the IMF’s China team, says:

“The dollar’s surge will renew calls for a shift from a dollar-centric global financial system.”

It can happen much faster than you think. And the dollar’s days are more numbered now than ever.

But what will replace it? And why can you expect the dollar to lose up to 80% of its value in the years ahead?