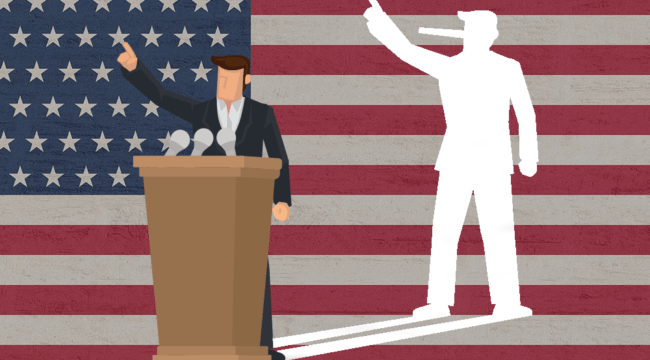 Dollar: a paper money, silver or cupronickel coin, and monetary unit of the United States, equal to 100 cents.

So runs the dictionary definition. But if one dollar equals 100 cents… what then is a cent?

The answer is one-hundredth of one dollar. And what again is one dollar? 100 cents.

And so we begin an infinite chasing of the tail — one dollar is 100 times one cent, one cent is one dollar divided by 100.

Trillions upon trillions of dollars are rolling from the presses. Many more will follow.

We should understand what in fact they are.

We seek clarity. We must therefore turn to the Coinage Act of 1792:

The money of account of the United States shall be expressed in dollars or units … of the value [mass or weight] of a Spanish milled dollar as the same is now current, and to contain three hundred and seventy-one grains and four sixteenth parts of a grain of pure … silver.

The Coinage Act of 1792 further authorized the production of $10 gold Eagles — “each to be of the value of ten dollars or units and to contain two hundred and forty-seven grains, and four eighths of a grain of pure … gold.”

One ounce of gold equaled roughly 15 ounces of silver.

The Gold Standard Act of 1900 later defined the dollar as “twenty-five and eight-tenths grains of gold nine-tenths fine” — or 0.05375 troy ounces.

Here is the central lesson:

Defined in silver, defined in gold… the dollar was nonetheless defined by weight.

A delirium of confusion surrounds it.

In today’s reckoning, we track the evolution of a mighty swindle…

“Redeemable in gold on demand at the United States Treasury, or in gold or lawful money at any Federal Reserve Bank.”

In those antique days, a fellow could march into a bank. He could hand the clerk a slip of paper, as illustrated above…

And he could demand the denominated amount in gold coin — payable on the nail.

The system imposed a reasonable discipline upon banks… and held inflation in checkmate.

Federal Reserve banks were required to keep a 35% reserve of “gold or lawful money” on hand, lest they make a liar of the United States Treasury secretary — in this case, the Hon. Andrew William Mellon.

In effect, the private citizen locked the banking system behind golden bars.

But one Great Depression, one New Deal and one world war later… we come now to a $10 banknote, dated 1950:

In appearance, it is nearly a perfect twin to the 1928 model — with one infinitely telling exception.

Can you sniff it out?

“Redeemable in gold on demand at the United States Treasury, or in gold or lawful money at any Federal Reserve Bank.”

“This note is legal tender for all debts, public and private, and is redeemable in lawful money at the United States Treasury, or at any Federal Reserve Bank.”

The fine print disguises a vast mischief: The gold provision was stricken from the record.

The bankers had broken free from their golden prison… and no longer could a private citizen bring them to honest account.

But what about “lawful money”? What is it?

‘I Want My Lawful Money’

In 1947, a certain gentleman — A.F. Davis by name — dispatched the following note to the United States Treasury, accompanied by a $10 note:

I am sending you herewith via registered mail one $10 Federal Reserve note. On this note is inscribed the following:

“This note is legal tender for all debts, public and private, and is redeemable in lawful money at the United States Treasury, or at any Federal Reserve bank.”

In accordance with this statement, will you send me $10.00 in lawful money?

The acting treasurer, M.E. Slindee, responded after this fashion:

Receipt is acknowledged of your letter of Dec. 9 with enclosure of one ten-dollar ($10.) Federal Reserve note.

In compliance with your request, two five-dollar United States notes are transmitted herewith.

And so, Mr. Slindee began chasing his tail — what the philosophical men call circular reasoning.

The Government Gives Up

In exchange for his $10 note, Mr. Davis received by mail two $5 bills bearing the same pledge to redeem in lawful money.

But this Davis fellow would not be so easily shooed off.

He returned one of the $5 bills, once again demanding lawful money in exchange:

… You are advised that the term “lawful money” has not been defined in federal legislation. It first came to use prior to 1933 when some United States currency was not legal tender but could be held by national banking associations as lawful money reserves.

Since the act of May 12, 1933, as amended by the Joint Resolution of June 5, 1933, makes all coins and currency of the United States legal tender and the Joint Resolution of Aug. 27, 1935, provides for the exchange of United States coin or currency for other types of such coin or currency, the term “lawful money” no longer has such special significance.

The $5 United States note received with your letter of Dec. 23 is returned herewith.

In 1963, all promises to redeem notes in lawful money were stricken from United States currency.

The Evolution of a Swindle

Here, in graphic detail, the devolution of American money: 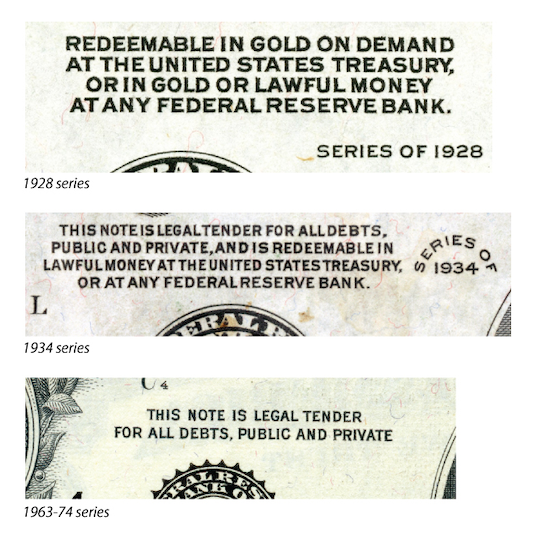 A Modest Defense of Paper Money

Say what you will of paper money. But in one sense, it is redeemable — if you’ll forgive the expression in the present context.

Like gold and silver, paper money files a claim upon Earth’s resources. It is woven from cotton and fashioned into linen.

A paper dollar is tangible. A fellow can hold it in his hand, in his wallet, in his mattress.

It cannot be erased at the stroke of a key.

The paper dollar is also anonymous. Once out of your hands, it washes its hands of you.

None of these happy virtues apply to digital money…

If paper money invites abuse… what about digital money?

Bound to Get Into Trouble

Digital money removes all natural checks on monetary production. It has no tangible existence. It is limited only by the discretion of men.

Wispy as fog, slippery as oil, it is conjured into existence… as if by the magician’s wand.

Digital money is therefore the type of money bound to get itself into trouble.

And it gets around the world at electronic speeds.

It is the ideal money for a government swollen to ghastly dimensions — its issue being unlimited in theory.

Digital money can also disappear at a keystroke. The bank can freeze you out of it. Every transaction goes on your permanent record.

And if the electricity is out, if the power grid is ungridded, how do you purchase your essentials with digital money?

Paper money can see you through.

Thus we raise a half-throated defense of paper money today…

We cannot transact in lawful money as originally defined by statute — gold and silver.

In its absence, we will settle for paper money.

That is, a money we can at least keep our hands on… and our eyes on…