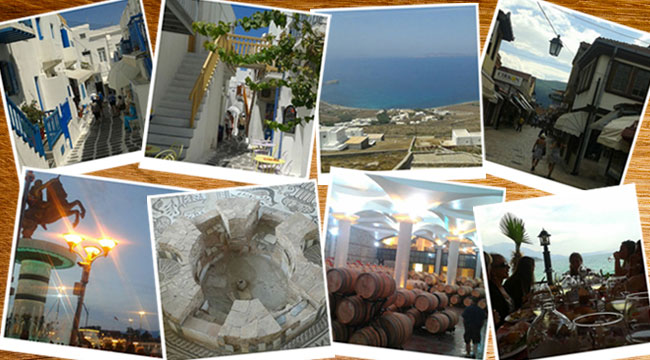 The Good and the Bad in an Ancient Emerging Market

I was in Macedonia two weeks ago with a small band of readers. We started in the capital, Skopje, and then made our way south and west to Bitola and Lake Ohrid.

Macedonia was really the appetizer on this trip. Greece is the main course. Nonetheless, every country has a story to tell, and Macedonia’s is not bad. It is another former socialist economy trying to slough off the old skin. In this, it joins a rather long list.

Some field notes are below, but fair warning: I draw no firm investing conclusions as of yet. What follows ends with a financial shrug…

Macedonia has a 10% corporate tax rate, but only if you distribute those profits. If the business retains the earnings, the tax rate is 0%.

To frame it a bit, Macedonia is in the Balkans and was once part of now defunct Yugoslavia. It is landlocked and shares a border with Albania, Kosovo, Serbia, Bulgaria and Greece. Macedonia has been independent since 1991. It is a tiny country of 2 million people. About half a million live in Skopje.

Macedonia as a separate nation is partly a work of imagination. Its historical claim to even its name is questionable. Macedonia was a republic in Yugoslavia, as I mentioned. The problem is that Macedonia is also the name of a region in Greece with a far stronger claim to the name. And so, Greece opposes Macedonia’s use of the name, calling the country instead “The Former Yugoslav Republic of Macedonia.”

The land itself, too, belonged at different times to other countries. And the people are a mix of mostly Orthodox Slavs and Muslim Albanians. This creates some political tensions, as you can imagine.

But let’s start with some of the good things.

Our first meeting in the country was with the Chief of Staff, Cabinet of the Minister for Foreign Investments, Vasil Dimovski. Vasil is an affable 30-something who played football at Ball State in Indiana. He seemed as American as any of us. Dimovski gave us the sanctified story that Macedonia wants to tell the world.

Top billing goes to matters of taxes. Macedonia has among the lowest tax rates in Europe. It has a 10% corporate tax rate, but only if you distribute those profits. If the business retains the earnings, the tax rate is 0%. There are other such tax incentives and goodies as Macedonia makes a push to bring to businesses here. The personal income tax is also 10%.

The country has its own currency, the denar, which it pegs to the euro. (We were sometimes able to pay for things with euros.) Macedonia itself has modest debt levels, though they are denominated in euros. This is not a problem now, but a country that borrows in currency it can’t create has real solvency risks.

Perhaps the most surprising thing is the number of English speakers. Macedonians learn English beginning in the first grade. This makes it easy to get around, order in restaurants, etc.

Still, Macedonia is a poor country. The average gross salary is 490 euros per month, one of the lowest in Europe. If admitted to the European Union, it would be its poorest member. Macedonia, at the moment, is an EU candidate and has met nearly all the requirements to belong in the club.

But the whopper economic stat is the unemployment rate, which is officially 29%.

The unemployment levels in European countries are really shocking. It is hard to imagine a place where nearly one out of every three people looking for work can’t find it. And again, that is the official number. Unofficially, the figure must be higher. The human costs are incalculable.

Walking around Skopje, there were no obvious signs of distress. There were beggars, but no more than you’d find in Baltimore. There were many cranes and building sites. And lots and lots of statues…

The number of statues became a running joke among our crew. They were everywhere. Big giant statues and lots of little statues. The largest, and signature piece, is the towering eight-story statue of Alexander the Great on horseback with his sword raised and his horse — named Bucephalus — on its hind legs. (Though, officially, the statue is just “Warrior on Horse” — because the Greeks and Macedonians fight over who owns Alexander the Great, too). 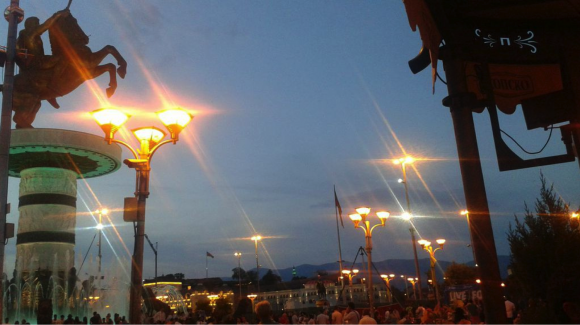 A shot from our dinner table — Alexander the Great dominates the square.

Then across the Stone Bridge, which dates to the Ottoman Empire and spans the Vardar River, another giant seems to hail him with arm raised, hand clenched in a fist, lions at his feet. This is Philip II of Macedon, Alexander’s father. (All of this is again contested history. And officially, it’s just “the warrior.”)

I read that the government spent hundreds of millions of dollars giving the capital city a face-lift. One can’t help but question the wisdom of the giant statues, especially in such a poor country. (There is a giant statue of Genghis Khan in Mongolia, but they charge you go there and you can actually buy stock in it — which pays a nice dividend, last I saw.)

In the older part of town, you’ll find the bazaar. There you step into a more authentic neighborhood with winding streets full of shops and restaurants. 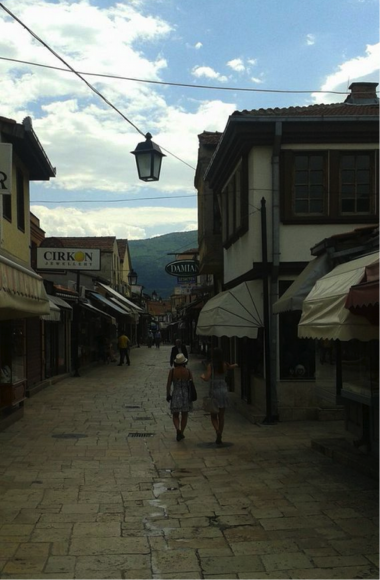 Strolling through the old bazaar.

You’ll also find several minarets and you’ll hear the call to prayer, reminders of Macedonia’s strand of Islamic heritage. We had lunch in a restaurant in this part of the city, a big platter of grilled meats and kebabs and beer. It reminded me of Turkey.

Unlike Turkey, Macedonia is not quite ready for prime time as a tourist destination. We stayed in the best hotels in town, but they are barely three-star by U.S. standards. As one reader put it, “They might have an educated workforce and English speakers, but…” Yes, but.

My room in Skopje had the trashcan filled with the previous occupants’ garbage. The shampoo bottles were already opened, and there was no soap. We had other small issues with rooms and slow service (or forgetful service) at restaurants.

Leaving Skopje, we headed south and west. We stopped and visited the old city of Stobi at the confluence of the Crna and Vardar rivers. Macedonia was once a Roman province and Stobi its second largest city. It was an important city, even minting its own coins.

It’s in ruins now. As a brochure put it:

“Toward the end of the sixth century A.D., life in Stobi comes to an end, marking the end of its 10-century history. In the next centuries, Stobi vanished into oblivion under the thick layers of earth and sand, until 1861, when the French historian and traveler Leon Heuzey would rediscover the glory and beauty of the ancient city.”

There are archaeologists on-site now, still digging. What they’ve found already is remarkable, including an extremely well-preserved mosaic floor. 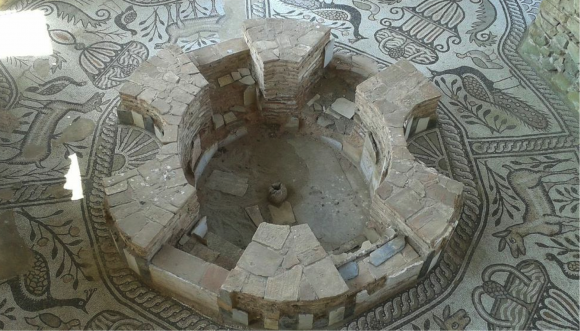 Ancient mosaic floor in the old Roman city of Stobi.

It’s always humbling to see ruins of once-great cities. It makes you think that no matter how grand we think our own civilization, it is an open question how long it lasts.

Of course, the nearby winery was probably more popular with our crew. We had an excellent lunch at the Stobi Winery and sampled four different wines. I liked them all. (As the great gastronome A.J. Liebling once wrote: “When one considers the millions of permutations of foods and wines to test, it is easy to see that life is too short for the formulation of dogma.”) 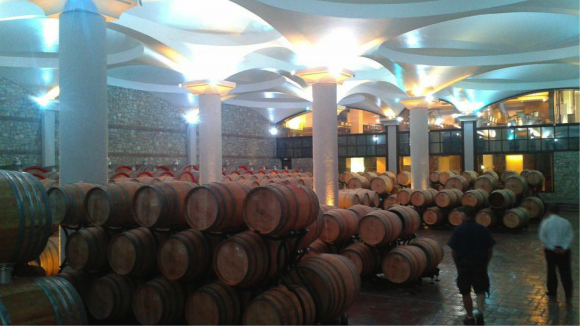 We ended our trip by visiting Lake Ohrid, where we ate the best grilled trout I’ve ever had at a restaurant by the water with a great view of the lake and mountains. 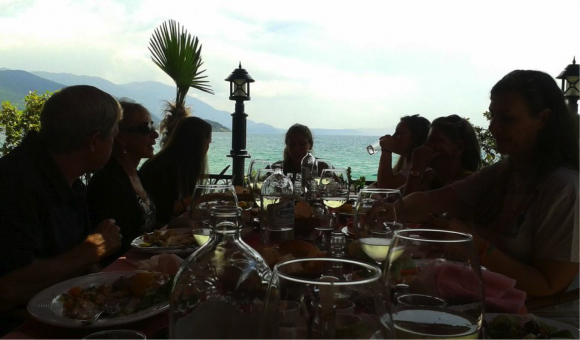 Our crew: Enjoying the trout at Lake Ohrid.

One thing for sure: We didn’t go hungry on this trip.

I can say that being here reminded me of being in Armenia, another former socialist country trying to get out from the long shadow of that destructive system. All such transitions are fascinating social experiments. It will be interesting to watch, whether we have a financial foot in the game or not.

Ed. Note: While Chris doesn’t detail a specific investment opportunity in this travelogue, he does have a solid portfolio of real, actionable stock picks that readers of The Daily Reckoning email edition have regular opportunities to gain access to. One of his best performing portfolios has just handful of reliable stock picks that could be showing lucky investors significant retirement gains, right now. To make sure you don’t miss the next opportunity to get in on Chris’s latest research, sign up for The Daily Reckoning, for FREE, right here.