The Fed Will Not Give up “Dark Money”

When it comes to second quarter U.S. economic growth figures, interpretation is everything.

On one hand, the projection of 4.1% second quarter growth is a sign of a surging economy set to grow for years to come.

But on the other hand, it is seen as temporary sugar rush created by tax cuts and debt. It’s unsustainable in the light of higher tariffs, an escalating trade war that could impact large portions of the economy, and rising federal deficits that put America even deeper in debt.

Another data point to determine which of these two camps is most accurate for predicting the future of the U.S. economy is job’s figures. July’s jobs report came in with fewer than expected jobs, a gain of 157,000 jobs vs. a forecast of 190,000.

While that miss in itself may not mean much, since the overall jobless rate dropped to 3.9%, the fact that wages are growing slowly remains a concern.

Also concerning is the record amount of household debt. Consumers are using it to spend and that is partially responsible for that 4.1% GDP growth, as I noted on Fox Business recently. But it’s not sustainable.

Add it all up and there’s considerable reason to believe that the 4.1% growth rate is only temporary.

It will not represent the full GDP growth figure over all of 2018, nor will it be the growth figure in 2019 or 2020. Even the Fed admits growth will slacken over the next couple of years.

I don’t often agree with the Fed. But on this point, I agree with the Fed’s forecast for slower growth to come. That outlook presents options for the Fed to create more credit, or what I call dark money to support the markets, to confront inevitable periods of volatility ahead.

Dark money is the #1 secret life force of today’s rigged financial markets. It drives whole markets up and down. It’s the reason for today’s financial bubbles.

Eventually, I would uncover how the dark money system works… how it has corrupted our financial system… and encouraged greed to the point of crisis like in 2008.

When I moved abroad to create and run the analytics department at Bear Stearns London as senior managing director, I got my first look at how dark money flows and its effects cross borders.

The “dark money” comes from central banks. In essence, central banks “print” money or electronically fabricate money by buying bonds or stocks. They use other tools like adjusting interest rate policy and currency agreements with other central banks to pump liquidity into the financial system.

Yet these dark money flows stretch around the world according to a pattern of power, influence and, of course, wealth for select groups. To be a part of the dark money elite means to have control over many. How elite is a matter of degree.

It’s easy to see how this dark money affects the stock market at a high level, because we can monitor its constant movement. 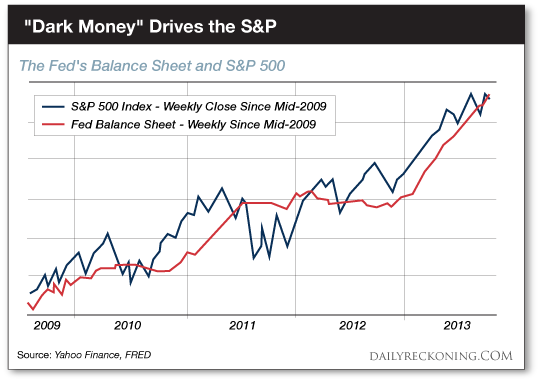 The black line shows you how much “dark money” the Federal Reserve has printed since 2008.

They move together — more dark money drives the market higher. Much higher.

There are dark money charts from around the world, just like the one I showed you for the Federal Reserve and U.S. stock market.

Look at this “dark money” chart from Japan, for example: 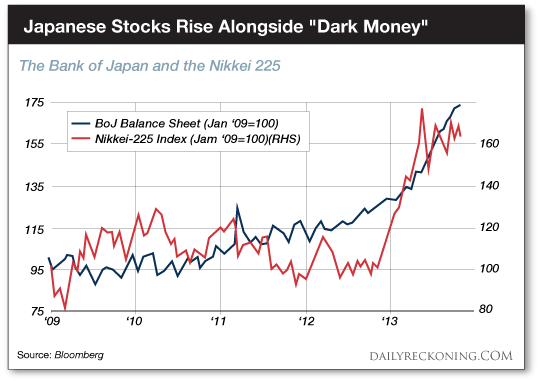 The blue line shows the dark money created by their central bank, The Bank of Japan. The red line shows Japan’s major stock index, the Nikkei 225, going up as well. The dark money drove the market much higher over the past eight years.

Or, look at this “dark money” chart from the U.K.: 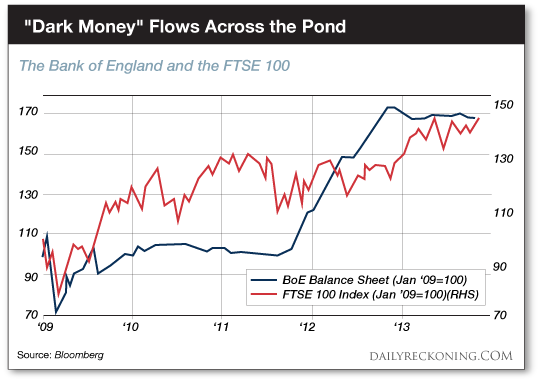 Again, the blue line shows the “dark money” created since 2009 by the U.K.’s central bank, The Bank of England. The black line shows how the FTSE 100, their stock index, has followed higher in lock-step.

To invest profitably in financial markets, you need to understand the hidden power relationships that drive financial and political events. Ideologies and personal associations among elites are oblivious to political party lines and international boundaries. So is dark money.

Where do things stand today?

The Fed has been raising interest rates since December 2015. And as of last October, it’s been reducing its balance sheet, although not as much as they’d have you believe (more on that in a moment).

But if markets plummet, the Fed will probably stop tightening or even return to quantitative easing.

This week, elite central bankers are having their annual confab at luxurious Jackson Hole, Wyoming.

The Federal Reserve chair invites elite central bankers to wine, dine and fish. In between the schmoozing, they will talk monetary policy.

This year, new chair Jerome Powell will be the master of ceremonies. He will be addressing the elite group on “monetary policy in a changing economy” this Friday.

The speech title alone casts a broad net. He will certainly discuss the tools available to the Fed when the next downturn occurs.

Given that rates are still pretty low, despite 175 basis points of tightening since December 2015, there’s not a ton of room to lower them should a recession or crisis happen. The Fed still does not have enough “dry powder” to fight a recession.

One of the items on the agenda at Jackson Hole will also examine the appropriate size of central bank balance sheets, and what they should be used for.

Even though the Fed has touted its march to quantitative tightening this year, in reality its balance sheet is barely $200 billion lower than its peak of $4.5 trillion. That’s basically a drop in the bucket, not much more than a rounding error.

Expect major central banks to end the year, on average, with asset books in total size right where they started.

While there will be some minor rate hikes here and there by the Fed, and mild tweaking of massive asset books, the overall story will remain the same.

It is worth noting that this Jackson Hole gathering might be more urgent than usual because of the situation in Turkey. You should pay considerable attention to what language they use when discussing contagion amongst emerging markets.

The bottom line is, the likely result of this rendezvous will be a bias toward the status quo of dark money.

Dark money rules the world, and it could keep the bull market running longer than most people expect, even though the eventual turnaround could be ugly.