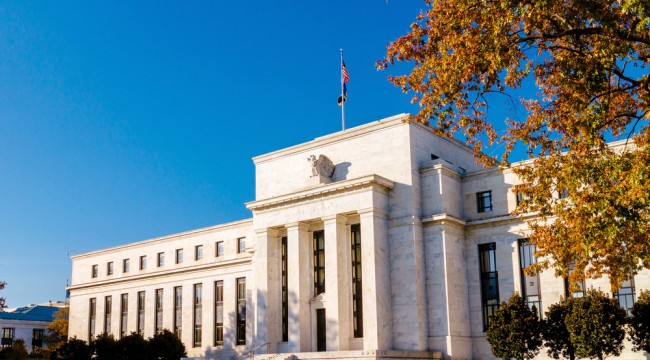 The Fed Is Spooking The Markets, Not China

Fasten your seat belts, this ride is getting interesting.

Last week the Dow Jones Industrial Average was down more than 1,000 points, notching its worst weekly performance in four years. The sell-off took the Dow Jones down more than 10% from its peak valuations, thereby constituting the first official correction in four years. One third of all S&P 500 companies are already in bear market territory, having declined more than 20% from their peaks.

Scarier still, the selling intensified as the week drew to a close, with the Dow losing 530 points on Friday, after falling 350 points on Thursday. The new week is even worse, with the Dow dropping almost 1,100 points near the open today before cutting its losses significantly.

However, no one should expect that this selling is over. The correction may soon morph into a full-fledged bear market if the Fed makes good on its supposed intentions to raise interest rates this year. Have no illusions, while most market observers are quick to blame the sell-off on China, this market was given life by the Fed, and the Fed is the only force that will keep it alive.

The Dow has now blown through the lows from October 2014, when fears over life without quantitative easing and zero percent interest rates had caused the markets to pull back about 5%.

Back then when market fear began spreading, St. Louis Fed President James Bullard publically issued a few choice words which reassured the markets that the Fed stood ready to reignite the QE engines if the economy really needed a fresh dose of stimulus. By the end of the year the Dow had rallied 10%.

Amid last week’s carnage, Mr. Bullard was at it once again. But instead of throwing the market a much needed life preserver, he threw it an unwanted anchor. He offered that the economy was still strong enough to warrant a rate increase in September. He was careful to say, however, that the Fed is still “data dependent” and will therefore base its decision on information that will come out over the next three weeks.

So after nearly seven years of zero percent interest rates, the most momentous decision the Fed has made since the Great Recession will be dictated by a few weekly data points that have yet to emerge. Haven’t seven years of data provided them enough information already?

What’s next? Will they have to check the five-day forecast to insure that there will be no rain before they pull the trigger?

As I have been saying for years, the Fed has always known that the fragile economy created through stimulus might prove unable to survive even the most marginal of rate increases. But in order to instill confidence in the markets, it has pretended that it could. Wall Street has largely played along in the charade, insisting that rate increases were justified by an apparently strengthening economy and needed to restore normalcy to the financial markets.

But the recovery Wall Street had anticipated never arrived, and traders who had earlier demanded that the Fed get on with the show, have now panicked that the rate hikes are about to occur in the face of a weakening economy. As a result, we are seeing a redux of the 2013 “taper tantrum” when stocks sold off when the Fed announced that it would be winding down its QE purchases of bonds.

The question now is how much further the markets will have to fall before the Fed comes to the rescue by calling off any threatened rate increase? What else could pull the markets out of the current nose dive?

Think about where we are. Stock valuations are extremely high and earnings are falling and the economy is clearly decelerating. The steady march upward in stock prices has been enabled by a wave of cheap financing and share buybacks. There are very few reasons to currently suspect that earnings, profits, and share prices will suddenly improve organically.

This market is just about the Fed. After one of the longest uninterrupted bull runs in history, bearish investors have learned the hard way that they can’t fight the Fed. So why should they now expect to win when the Fed is posturing that its about to embark on a tightening cycle?

If the Fed were to do what it pretends it wants to do (embark on a tightening campaign that brings rates to about 2.0% in 18 months), and in the process ignore the carnage on Wall Street, I believe we would see a consistent sell off in which most of the gains made since 2009 would be surrendered.

After all, how much of those gains came from bona fide improvements in the economy?

It was all about the twin props of Quantitative Easing and zero percent interest rates. The Fed has already removed one of the props, and it’s no accident that the markets have gained no ground whatsoever in the eight months since the QE program was officially wound down.

As the market considers a world without the second prop, a free fall could ensue. Now that we have broken through the October 2014 lows, there is very little technical support that should come in to play. A free fall in stocks could be an existential threat to an already weak economy.

It should be clear the Janet Yellen-controlled Fed would not want to risk such a scenario. This is why I believe that if the sharp sell off in stocks continues, we will get a clear signal that rate hikes are off the table.

Of course, even if it does throw us that bone, the Fed will pretend that the weakness was unexpected and that it does not come from within (but is caused by external forces coming from China and Europe). Using that excuse, it will attempt to prolong the bluff that its delay is just temporary.

For now at least Wall Street is happy to play along with the blame China game. This ignores the fact that China has had much bigger sell offs in recent weeks that did not lead to follow-on losses on Wall Street.

I think the problems in China are the same problems confronting other emerging economies, namely the fear of a Fed tightening cycle that would weaken U.S. demand, depress commodity prices while simultaneously sucking investment capital into the United States, and away from the emerging markets, as a result of higher domestic interest rates and the strengthening dollar.

But if a temporary halt in rate hike rhetoric is not enough to stem the tide, a more definitive repudiation may be needed. Such an admission should finally open some eyes on Wall Street about the true nature of the economy and the unjustified strength of the U.S. dollar. That already may be happening.

The dollar index closed at 95 on Friday…down from a high of 98 two weeks prior. On Monday, the index blew through the 93.50 support level and dropped more than 3% in just one day, down to intraday low of 92.6. Who knows where it stops now?

Gold is rallying in the face of the crisis and has moved quickly back to $1,160, up around $80 in just two weeks. The bounce in gold must be causing extreme angst on Wall Street. Just two weeks ago, amid widening conviction that gold would fall below $1,000, it was revealed that hedge funds, for the first time, held net short positions on gold.

Those trades are not working out. With the major currencies and gold now strengthening against the dollar, the greenback has had some success against far lesser rivals like the Thai baht and the Kazakhstan tenge. But these victories against currencies largely tied to commodities may be the last fights the dollar wins for a while, especially if Janet Yellen finally comes clean about the Fed’s inherent dovishness.

Those currencies now falling the farthest may be the biggest gainers if the Fed shelves rate increases.

Some still cling to the belief that the Fed will deliver one or two token 25 basis point rate increase before year end. But this could expose the Fed to a bigger catastrophe than doing nothing at all. If it actually raises rates, and the crisis on Wall Street intensifies, further weakening an already slowing economy, the Fed would have to quickly reverse course and cut back to zero.

This would put the Fed’s cluelessness and impotency into very sharp focus. From its perspective anything is better than that. If it does nothing, and the economy continues to slow, ultimately “requiring” additional stimulus, it will at least appear that its caution was justified.

Unfortunately for the Fed, it won’t be able to get away with doing nothing for too much longer. Events may soon force it to show its hand. Then perhaps some may notice that the Fed is holding absolutely nothing and has been bluffing the entire time.