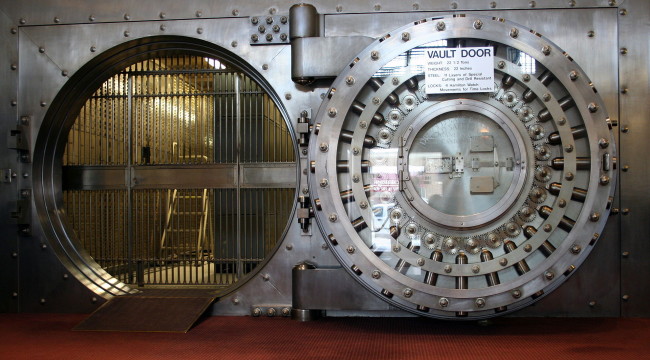 The Deep State is Coming for your Savings

BALTIMORE – Is there really a “War on Cash”?

We’ll come back to that in a minute… First, a quick roundup of last week’s action.

The number of rigs drilling for oil and gas in the U.S. is plunging toward the lowest level in more than 75 years of records… culminating in the collapse of almost 75 percent of the rig count.

The fracking boom towns are now turning into ghost towns.

The billions of dollars of investment (the industry has never been cash positive) have stopped flowing into the U.S. shale producers. Revenues (such as they are) have slowed to trickle on a cold day.

And in the tech sector, Yahoo is paying the price for its buying spree. It’s one of the 11 companies that, according to USA TODAY, “lost obscene sums” of money last year:

There are 11 companies in the broad Russell 3000 index, including a whole host of energy companies like Apache but also industrial conglomerate General Electric and struggling online portal Yahoo, that have reported staggering net losses in the just-completed calendar year…

Each of these companies reported net losses of $4 billion or more last year – dwarfing even the impressive $1 billion net loss reported Thursday by struggling retailer Sears.

But let us return to the War on Cash. It is far more sinister than you might realize…

Several countries – such as Denmark, Sweden, and Norway – are already almost totally cashless.

Others, such as France, have banned cash transactions over certain amounts. There are even plans at the highest levels of the Indian government – right now one of the most cash dependent societies in the world – to “disincentivize” using cash.

Meanwhile, establishment economists and commentators – most notably Harvard economists Larry Summers and Kenneth Rogoff, Citibank chief economist Willem Buiter, Andy Haldane at the Bank of England, and Martin Wolf at the Financial Times – have come out in favor of a cashless society.

As we recently reported, Summers tells us it’s “time to kill the $100 bill.”

And according to the New York Times, “Getting Rid of Big Currency Notes Could Help Fight Crime.”

Today, we dig a little deeper into this pile of manure to try to find out what it hides.

And what a surprise! There is the Deep State – malodorous, malevolent, and malignant.

First, let us dispose – as we would a dirty diaper with an outstretched arm – of the notion that getting rid of Ben Franklins and other large denomination bills would somehow “fight crime.”

Now suppose the $100 bill is no longer available. Does the drug dealer say to his client, “Whoa, I guess we can’t do business. I can’t be bothered to carry big wads of cash.”?

Does the crony defense contractor meet a member of the House Armed Services Committee in the parking garage and tell him, “I’m sorry, I just can’t get you the money. It won’t fit in the envelope.”?

Don’t worry about the criminals. In Argentina, the backbone of the economy is the 100-peso note – worth only about $6.

We have a place in Argentina. We’ve seen how it works. People use 100-peso notes for everything – from buying the morning paper to selling $1 million apartments. They carry it around in paper bags (so as not to attract attention of thieves.) They stash it in safes. Stacks of it bulge from their pants pockets and sit on the counters of the black market money changers.

Is the inconvenience of small denomination bills going to stop them?

Forget it. They’ll switch to smaller bills, foreign currencies, Bitcoin, gold, or something else. Block the use of convenient currency… and they’ll innovate.

How about the idea that banning cash will help the economy?

With cash harder to come by, it will be easier for central bankers to impose a negative interest rate on your bank deposits.

Without the option of holding your savings in physical currency, you’ll have no choice but to keep your money on deposit in the bank… and pay to save.

But a negative interest rate is just another tax… one that is imposed by employees of the banking industry cartel and that needs no vote in Congress.

But hold on… Raising taxes does not normally cause people to spend money. It causes them to zip up their purses, not open them.

Taking away your money leaves you with less of it. (Duh!) You have to cut back. And if you are saving for your retirement, a tax on your savings means you will have to save more (and spend less) of what you earn.

There is no evidence anywhere in the historical record of an economy helped by taking money away from people. The idea is so absurd it could only come from a PhD economist… or a scoundrel.

But to fully understand it… we need to go back hundreds of years.