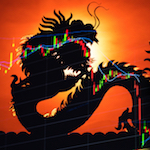 A Chinese financial and economic crisis has been in the forecasts of many analysts for years, including my own. So far, it has not happened. Does this mean China has solved the problem of how to avoid a crisis? Or is the crisis just a matter of time, set to happen sooner than later?

My view is that a crisis in China is inevitable based on China’s growth model, the international financial climate and excessive debt. Some of the world’s most prominent economists agree. A countdown to crisis has begun. 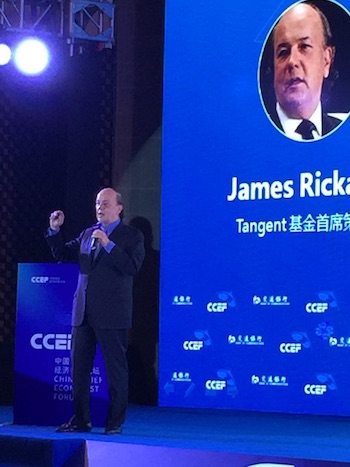 Your correspondent addressing a conference of the chief economists of major Chinese banks and foreign banks doing business in China. This conference took place in Shanghai and offered great networking opportunities to discuss issues of mutual interest with the top financial economists in China. These meetings included the chance to have breakfast with the heads of precious metals operations of the four largest gold dealers in China.

As I explained above, China has hit a wall that development economists refer to as the “middle income trap.” Again, this happens to developing economies when they have exhausted the easy growth potential moving from low income to middle income and then face the far more difficult task of moving from middle income to high income.

The move to high-income status requires far more than simple assembly-style jobs staffed by rural dwellers moving to the cities. It requires the creation and adoption of high-value-added products enabled by high technology.

China has not shown much capacity for developing high technology on its own, but it has been quite effective at stealing such technology from trading partners and applying it through its own system of state-owned enterprises and “national champions” such as Huawei in the telecommunications sector.

Unfortunately for China, this growth by theft has run its course. The U.S. and its allies, such as Canada and the EU, are taking strict steps to limit further theft and are holding China to account for its theft so far by imposing punitive tariffs and banning Chinese companies from participation in critical technology rollouts such as 5G mobile phones.

At the same time, China is facing the consequences of excessive debt. Economies can grow through consumption, investment, government spending and net exports. The “Chinese miracle” has been mostly a matter of investment and net exports, with minimal spending by consumers.

The investment component was thinly disguised government spending — many of the companies conducting investment in large infrastructure projects were backed directly or indirectly by the government through the banks.

This investment was debt-financed. China is so heavily indebted that it is now at the point where more debt does not produce growth. Adding additional debt today slows the economy and calls into question China’s ability to service its existing debt.

China’s other lifelines were net exports and large current account surpluses. These were driven by cheap labor, government subsidies and a manipulated currency. These drivers of growth are also disappearing due to demographics that reduce China’s labor force.

China is facing competition by even cheaper labor from Vietnam and Indonesia. Trade surpluses are also being hurt by the trade wars and tariffs imposed by the U.S.

Meanwhile, the debt overhang is growing worse. China’s creditworthiness is now being called into question by international banks and direct foreign investors.

The single most important factor right now is the continuation and expansion of the U.S.-China trade war. When the trade war began in January 2018, the market expectation was that both sides were posturing and that a resolution would be reached quickly.

I took the opposite view. Trump waited a full year from his inauguration before starting the trade war. Trump has given China every opportunity to come to the table and work out a deal acceptable to both sides.

China assumed it was “business as usual” as it had been during the Clinton, Bush 43 and Obama administrations. China assumed it could pay lip service to trading relations and continue down its path of unfair trade practices and theft of intellectual property.

By January 2018, Trump decided he had been patient enough and it was time to show China we were serious about the trade deficit and China’s digital piracy. Since the trade war began, the U.S. has suffered only minor impacts, while the impact on China has been overwhelming.

The deteriorating situation in China is summarized nicely in this excerpt from an article dated Feb. 5, 2019, and titled “The Coming China Shock,” by economists Arvind Subramanian and Josh Felman:

Back in September, we saw some discontinuity in China’s economic performance as inevitable. Even if the country was not heading for a full-blown crisis, we believed it would almost certainly experience some combination of rapidly decelerating growth and a sharply depreciating exchange rate. That prognosis has since become even more likely. With global economic growth and exports declining, China’s economy is on track to slow further relative to the 6.4% growth recorded in the fourth quarter of 2018. The double-digit average achieved from the 1980s until recently has never seemed more distant.

The impact described by Subramanian and Felman is illustrated in the chart below. This chart shows the price and volume of trading in the iShares China Large-Cap ETF (NYSE:FXI).

FXI peaked at $54.00 per share on Jan. 26, 2018, almost exactly on the day the trade wars began. The index has trended steadily downward from there to the current level of about $42.50 per share, a 21% decline with volatility along the way.

This decline is only a partial reflection of the trade war impact. Wall Street has consistently underestimated the hard economic toll the trade war has taken on China. Wall Street formed the view that the trade war would be short and of minimal impact. Instead it has stretched for 14 months with no end in sight.

The tariffs imposed by the U.S. on China so far have dramatically slowed the Chinese economy. Yet those tariffs are minor compared with what’s in store.

March 1, 2019, is the deadline for the current “truce” in the trade war intended to facilitate negotiations. U.S. demands — especially in the area of verifiable limitations on the theft of U.S. intellectual property — are impossible for China to meet because it depends on such theft to advance its own economic ambitions.

It is highly unlikely that the outstanding issues will be resolved by March 1. Some minor issues may be resolved and some “deal” announced. A deal may include a reduction in the U.S.-China trade deficit through larger purchases of U.S. soybeans by China.

But the big issues including limits on U.S. investment in China, forced technology transfers to China and theft of intellectual property will not be resolved.

Given these economic, trade war and political head winds, weakness in China is only getting worse.

And China’s leadership can only hope the damage can be limited before the people begin to question its legitimacy.