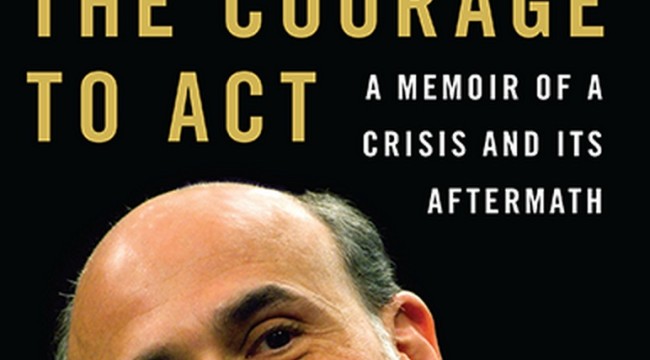 The Courage of Ben Bernanke? Pfff...

This week I’m headed to one of the world’s more interesting re-emerging markets.

It was a place of great wealth and power that has now fallen on hard times. It is a place where many fortunes got their start. It is a market now coming back after a long fall.

I’ll be there scouting out a few microcap ideas for us, among other things.

Meanwhile, here’s a short piece I dashed off for you this morning. It won’t make you a better investor, but it will help explain a little about this economic matrix we find ourselves in.

Ben Bernanke is out making the rounds.

He also has a column in the today’s Wall Street Journal also absurdly titled: “How the Fed Saved the Economy.” I want to deal with only a sliver of what he said.

He writes, “Reasonable people can disagree on whether the economy is at full employment.” He also wrote that a “5.1% headline unemployment rate would suggest that the labor market is close to normal.”

There was a time when economists saw a 5% unemployment rate as a systemic failure. Now, it’s “close to normal.” There are millions of people able and willing to work but unable to find work. That’s perfectly acceptable now.

It’s been quite a lot of back and forth to get to this point. Economic ideas come and go in cycles too. To summarize this history, I use as my chief guide a book by William Mitchell and Joan Muysken titled Full Employment Abandoned: Shifting Sands and Policy Failures.

Then the Great Depression came along.

It was during this time that economists first started to deal explicitly with the concept of involuntary unemployment on a mass scale. The idea of macroeconomics as its own discipline emerged during this time, too. The idea was that what might apply to individuals did not necessarily apply in to all individuals — the fallacy of composition. (For example, if you stand at a football game, you get a better view. But not if everybody stands.)

The dominant theory that came to rule the roost after the Second World War saw mass unemployment as a failure that needed correcting. The emphasis on economic policy was full employment — which meant that there were at least as many job openings as people looking for jobs. The only unemployment would be incidental and temporary, on the order of 1% or 2%.

And for the Organisation for Economic Co-operation and Development (OECD) countries — which included North America, Western Europe and Australia — unemployment was usually less than 2% for most of the early postwar period.

But the focus on jobs did not last long. Even as early as the 1950s, economists began to mix up models of employment and inflation. The so-called Phillips curve was an influential model born in 1958. It showed that if too many people were working, then inflation would arise.

In short, there was a trade-off, some economists believed. And therefore, it would be better to have more people not working so inflation would stay low. By the 1970s, this was orthodoxy. So economic policy shifted again. It is no wonder that the OECD countries have suffered from having lots more people unemployed since the 1970s than they did before.

The authors of Full Employment Abandoned spend a lot of time debunking the idea of this trade-off. To trace this argument here would take us too far afield. I will say that I believe they are right.

In any event, the economic argument should be secondary. It’s a question of what’s more humane. Is it OK to sacrifice the working lives of millions of people to the vague ideas of economists?

It’s worth pointing out that preindustrial societies did not have problems of mass unemployment. This the authors readily acknowledge:

“It is the introduction of state money (which we define as government taxing and spending) into a nonmonetary economics that raises the specter of involuntary unemployment.”

It is the purpose of state money to “facilitate the movement of real goods and services from the nongovernment (largely private) sector to the government (public) domain.”

The government does this by levying taxes. A credible threat of imprisonment (or worse) creates an instant demand for its money. To get state money, people have to offer goods and services to the state. (Then these people have state money and others then trade with them. But in a fiat currency world, it starts with the state.)

That’s how it works, in plain English. The whole thing we call an “economy” gets its motor power from the threat of violence that underwrites state money. Anthropologist David Graeber, in his book Debt, shows how state money originated with the desire of kings to raise armies.

It kind of puts the whole thing in a different light, doesn’t it?

Colin Ward, a wise old British anarchist who died in 2010, liked to point to out that we will only get rid of unemployment if we “break free from our enslavement to the idea of employment.”

The idea of employment itself is relatively recent, dating from the 1840s.

Ward looked at preindustrial societies and their informal economies. Again, there was no mass unemployment. There was (and is) always work to do. In Ward’s telling, people had what seemed a much healthier relationship with work. They had more control over when they worked.

They often owned their tools and workshops and gardens. There were more informal transactions not involving state money. As such, these people were more independent, and also prone to radical politics. As Ward wrote in 1974:

“Ninety years ago, people’s mental image of a socialist was a self-employed cobbler, sitting in his shop with a copy of William Morris’ Useful Work Versus Useless Toil on the workbench, his hammer in his hand and his lips full of brass tacks.”

Back then, you could plausibly work and live outside of the formal economy. For much of the 19th century (and earlier), most people paid no taxes at all. Even as late as 1939, Ward shows how the typical working man lived virtually tax free.

You can’t really be that way now. You have to pay taxes. You have to register or get a license to do even simple things. Laws have reduced the informal economy to the status of the criminal.

I know I am way out there now.

The point is we have a narrow idea of what’s normal when it comes to work. But things could be otherwise — and have been.

Bernanke lives in the world of the moment, and he’s wedded to the system as is. To me, courage isn’t trying to save the sorry system we have. Courage is a willingness to let it die and try something else.