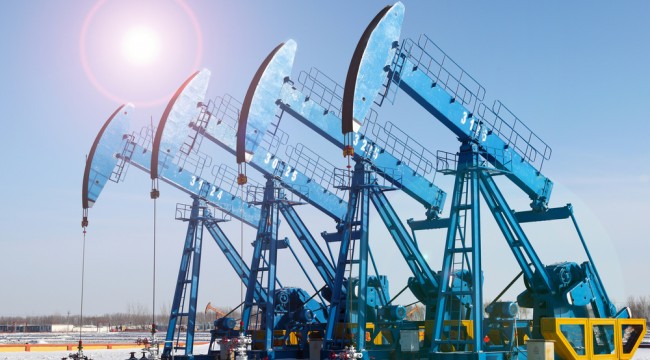 Shopping For 100x Stocks in Oil and Gas

I’m back from Vancouver, where I spoke at the Sprott-Stansberry Natural Resource Symposium. I enjoyed the conference and chatted with attendees, other speakers and mining executives. It’s in a great setting at the Fairmont Hotel Vancouver, and the city is a pretty place in the summer with its sunny skies, glistening waterfront and green mountains behind.

So I’ve been thinking more about the natural resource sector in the context of making 100-to-1. Below, I want to talk about what is the most important thing to look for and give you an example of a company that gets it.

After all, resource stocks would seem a good place to fish. Cheap stocks appear plentiful. Stocks linger near lows not seen since the 2008 crisis.

Investors in resource stocks over the last five years must feel like they’ve been stung by a swarm of bees. The stings just kept coming. It’s not hard to find stocks down 90% from their 2011 highs. Even shares of the big, leading miners have been stung badly.

Off the top of my head, I thought of some miners and pulsed stock quotes: Freeport-McMoRan, the copper giant, down 69% in the last five years. BHP, the big diversified miner, down 45%. Vale, the Brazilian giant, down 80%. Teck Resources, once an $80 stock, trades for just $7.

The question is how to pick your way through this sector.

And to answer that question, let’s assume ignorance as to what commodity prices will do. Some speakers wanted to pretend they had a good bead on what prices of oil or copper or whatever will do. I don’t share that view. Nobody knows.

Instead, I want to base my analysis on the economics of the assets in question. I want to make money even if the commodity goes nowhere. In my talk in Vancouver, I spoke about the importance of return on invested capital and the ability to reinvest profits at a high rate of return.

In my study of 100-baggers, I found this was the most important characteristic to look for. (My book 100-Baggers is out in an e-version. The hardcover will be out in September. You can grab a copy here for $4.95, which covers shipping and handling.)

In the resource sector, such birds are rare. But there are some. I talked about the royalty and streaming companies as a good example. (I published some notes to readers of my Mayer’s Special Situations newsletter. The Daily Reckoning republished an excerpt here.)

But there are others. Brad Farquhar, the CFO at Input Capital (more below), told me about Peyto. He’s owned the stock for years and pointed me to it again recently, as it’s sold off and sits at 52-week lows.

Peyto is a low-cost natural gas producer in Alberta’s Deep Basin. The CEO is Darren Gee. He writes monthly letters to his investors on various topics affecting Peyto. But one thing comes through loud and clear. “Our strategy at Peyto,” Gee writes in the August letter, “and… our sole focus is about maximizing the return on capital for shareholders.” [Bold added.]

Well, there it is.

This is more than just talk. “We pride ourselves on converting capital to cash flow faster than almost anyone else in this industry,” Gee writes. Then he provides a chart that proves it. In fact, there are many charts at Peyto’s website that show off its strengths in all kinds of ways. The disclosures are excellent.

Gee gets it. And he’s deeply committed to the idea. In a November 2014 letter, he writes about the book The Outsiders: Eight Unconventional CEOs and Their Radically Rational Blueprint for Success by William Thorndike.

This is an important book in the quest for 100-baggers, and I spend a chapter on it in my own book. Here is Gee. This made me want to buy the stock right then:

“Peyto follows the same basic business principles, which were boiled down to this:

“Ultimately, I believe Peyto’s competitive advantage comes from the same place as many of these [Outsider] firms. We practice ‘radical rationality,’ and we (all of us at Peyto) take the approach of long-term investors and owners.”

I cannot emphasize enough how rare it is to find this commitment in a resource name. Most oil and gas companies are terrible about spending their profits (assuming they have any). Gee is not.

Gee reminds me of Ken Peak, the late CEO and founder of Contango Oil & Gas. Peak, too, obsessed over return on capital on a per share basis. He was a great CEO, and Contango was a great stock, running from under a dollar in the late 1990s to $92 per share in 2008. (It’s a different company now, sadly.)

Gee made an explicit comparison of Peyto against the celebrated outsiders in Thorndike’s book. Linger over this table for a minute. (Note: CAGR stands for compound annual growth rate): 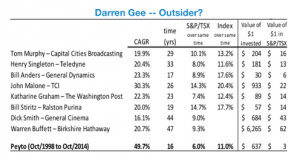 That’s incredible. Peyto is a 637-bagger. If there ever is a second edition of the book, Gee belongs in it.

If you are interested in oil and gas, I recommend you add them to your monthly reading pile. Investing is a people business, and Gee is clearly the kind of guy you’d want to partner with and learn from.

Conveniently, too, the stock is down. It’s a proven winner in the space, and if you want to take a shot at an oil and gas name, I think you’d be hard-pressed to find a better company than Peyto. (This is not an official recommendation, at least not now — just an idea I’m passing along for you to do with what you will.)