“There is an even more important purpose for gold,” says Valentin Katasonov, professor of international finance at the Moscow State Institute of International Relations.

But what, other than preserving wealth and shortening the tentacles of government?

“That of strategic reserve.”

Our very own Byron King took the stage yesterday morning at the Sprott Natural Resource Symposium here in Vancouver.

Byron is a winsome fellow with a long roster of adventurous tales beneath his belt.

He was a naval aviator and personal aide to the Chief of Naval Operations — the latter being highest-ranking officer in the U.S. Navy.

Byron’s also a Harvard-trained geologist who travels the world scouring investment opportunities in the mining space.

Byron really had the crowd going yesterday with his homespun jests and puns.

But when it comes to gold, Byron left no doubt that Russia is all business.

Russia is a nation that takes the long view of things. Its leaders think strategically… as a good chess player thinks strategically.

Is it any wonder that chess is Russia’s national pastime?

Bear the foregoing in mind when you consider the following fact…

He coughed up Exhibit A in proof thereof: 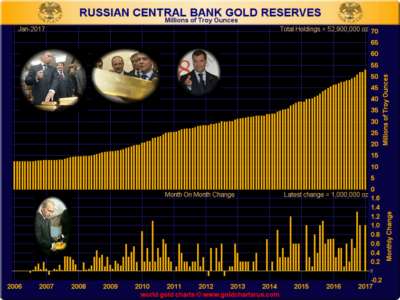 Supporting Byron’s claim, Sputnik News affirms that Russia is “stacking bullion bricks like there is no tomorrow.”

Tomorrow may dawn yet. But the point remains.

Byron then presented the gold-to-GDP ratios of the world’s leading powers.

Would you care to hazard whose is highest?

Russia leads, and by a good stretch at that.

After convincing the crowd of Russia’s gold-buying spree, Byron polled the audience:

“Do you think they’re stupid?”

Few among the hundreds assembled seemed to think they were.

The Sprott attendees are evidently not alone…

“The [current] price of the precious metal is undervalued, and significantly so… Investors looking for long-term results are investing in gold,” he continued.

Here again, the long view… the long game of chess.

And exactly what is the long view?

In the years to come, global financial markets will see a significant devaluation of the American currency… Russia and China continue to stockpile gold in a bid to cut their economies’ dependency on the U.S. dollar in the future.”

It’s no secret that Russia and China seek an end to U.S. dollar hegemony.

If China [and] Russia… can grasp the opportunity to escape the unsound money system of the Western establishment, they will at least partially insulate 3 billion people from a global currency disaster.

Lenin, after all, pledged in 1921 to make public toilets out of gold on the streets of the world’s largest cities.

Shouldn’t the duty of monetary salvation fall to the “free market” countries… such as the United States?

But it is said that the Lord works in mysterious ways…