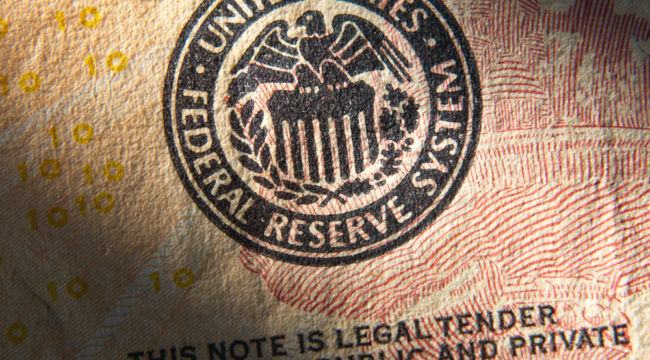 Has it helped? Has it hurt?

Today the official scorecard is in… which we reveal shortly.

First we glance at a different type of scorecard — the stock market.

Today, for the fourth straight session, both the S&P and Nasdaq set fresh records.

Though still 2% off its January top… it has officially emerged from correction territory after more than six months in the wilderness.

Bears really have to whistle hard to keep their courage up these days.

We assume the gods are plotting… and biding their time.

Deutsche Bank examined their impact on several metrics of economic performance around the world.

1. In eight of the 12 cases analyzed, the impact on the economy was negative

2. In three cases, it was completely neutral

We enter the following graphic into the record as evidence of central bank futility: 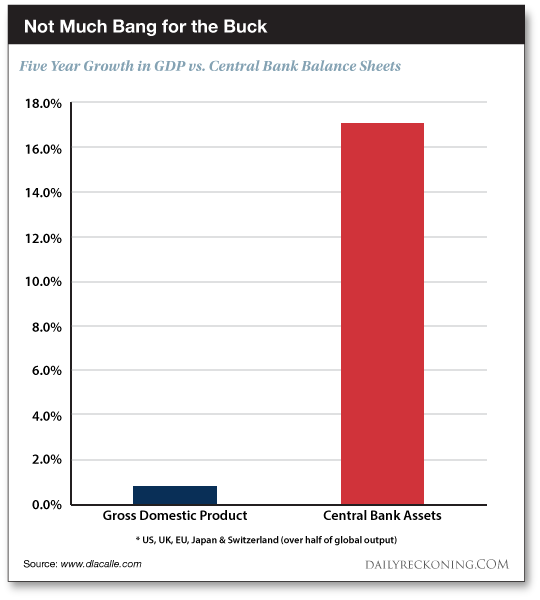 Where have all the benefits of unconventional monetary policy accrued?

In the stock market, of course.

Cheap debt and ultra-low interest rates have driven the herd into stocks.

And corporations, fattened on cheap debt, have purchased their own stocks at a record gallop.

We need only point to today’s record highs as proof thereof.

Meantime, the average American, toiling on Main Street, has been losing his toehold on the economic ladder.

We are told unemployment has been licked.

But former colleague David Stockman informs us that Americans had 73.83 million “breadwinning” jobs in July.

That figure is only one million jobs higher than 18 years ago.

A quaint fact when you consider today’s population is 48 million greater.

Nor is the average worker outpacing inflation.

But inflation is on the creep… like a silent thief on tiptoe.

Core inflation is nearing its highest levels in six years.

The average worker is thus a hamster set upon his wheel… running in place… or worse.

Does this enhance the long-term safety of the American republic?

Historian Peter Turchin is the author of War and Peace and War: The Rise and Fall of Empires (we tip our hat to Daily Reckoning contributor Charles Hugh Smith for the reference).

At the height of the Roman Republic, Turchin informs us that the wealth of Rome’s top 1% was perhaps 10–20 times a commoner’s.

At the time of Rome’s terminal imperial decline… it may have risen to 10,000 times.

America’s numbers aren’t quite so out of joint — yet.

The vast bulk of the “recovery’s” gains have gone to the asset-holding classes, while the great American middle has given ground.

It has only widened the gulf developing since the mid-1980s, when the financialization of the U.S. economy was getting underway: 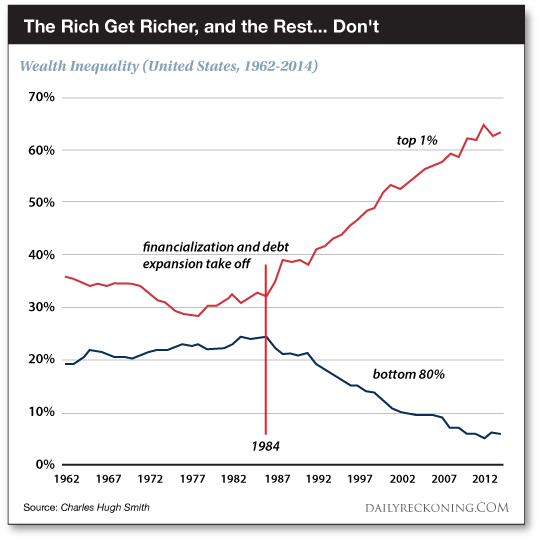 If trends continue… will the center hold?

1. Stagnating real wages due to oversupply of labor.

Please ask yourself, dear reader, if any of the preceding apply to today’s United States.

The national debt stands at $21 trillion.

Trillion-dollar annual budget deficits are now in prospect for years to come.

Something, somewhere, sometime, must give way.

But put away all your concerns… and rejoice on this late summer day — the stock market is at record highs.