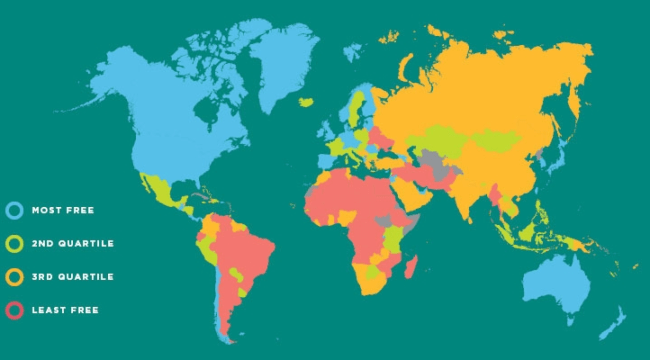 The Economic Freedom of the World: 2018 Annual Report is out.

On the following metrics of economic freedom nations are ranked:

Where do these United States rank among the nations of the Earth?

How economically free is the Land of the Free?

But first a check on markets, free or otherwise…

As expected, the Federal Reserve raised its target rate another 0.25% today.

Stocks traded in green territory much of the day, fully expecting the announcement.

But shortly after Jerome Powell’s 2:30 press conference, markets took a sudden fright (more on which tomorrow).

The Dow Jones ended the day 107 points lower. The S&P was down 10. The Nasdaq, seventeen.

But let us revisit the question of the day:

Where is America ranked in the world’s index of economic freedom?

Since 1996 Canada’s Fraser Institute has issued its annual Economic Freedom of the World report.

It took second place as recently as 2000, for example.

But after the great gale of 2008 blew on through, American economic freedom went under a cloud…

With “soundness of money” being one of Fraser’s criteria, we should not be surprised…

Quantitative easing was in full swing.

The Federal Reserve had the printing press going every hour of the 24, seven days of the seven.

Meantime, the Keynesian quack cure of “borrow and spend” issued forth in heavy doses.

And the national debt swelled from $9.5 trillion to today’s $21 trillion.

Its current debt-to-GDP ratio stands at 106% — that is, the national debt exceeds the entire $19.9 trillion economy.

“The United States used to have one of the freest economies in the world,” as explains Ian Vasquez, co-author of the related Human Freedom Index.

“It used to be a two, three or four, and then government started to grow [and] spend more,” he concludes.

In reminder, the United States dropped clean to 18th place in the Index of Economic Freedom by 2012.

Now an entire decade has passed since the great storm.

Once again, precisely where does the United States rank in the roster of economic freedom?

The answer may stun you:

Sixth place is not second place… nor is it first place.

We therefore lift a modest hymn in praise of rising American economic freedom.

Excelling the United States in economic freedom are, in descending order:

Falling in behind the United States are Georgia, Mauritius, the United Kingdom, Australia and Canada.

In proof that economic might and economic freedom are not synonyms, China — the world’s second-largest economy — rings in at 108th place.

Would it surprise you to learn that starving Venezuela finished dead last?

Economic freedom in Venezuela is reduced to the freedom of the belly to growl and the heart to break.

Though in fairness… North Korea and Cuba yielded insufficient economic data for Fraser to even evaluate.

Coming back home, and please do, the United States wins specific high marks for “sound money” and “regulation.”

The answers are close enough at hand…

Since December 2015 the Federal Reserve has taken to the path of rising interest rates.

Since October last, it has also been working down its post-crisis balance sheet. The business is scheduled to continue through 2020.

Meantime, President Donald Trump has “undertaken the most extensive regulatory reduction ever conceived” — his words.

A gust of rhetoric perhaps.

We might add that tax cuts have put more money to the service of economic freedom.

All in all, a sweet dish.

But do not forget: Money borrowed and spent today is money that must be repaid tomorrow — with interest.

Within a decade, more than $900 billion in interest payments will be due annually, easily outpacing spending on myriad other programs. Already the fastest-growing major government expense, the cost of interest is on track to hit $390 billion next year, nearly 50% more than in 2017, according to the Congressional Budget Office.

“It’s very much something to worry about,” warns C. Eugene Steuerle, co-founder of the Urban-Brookings Tax Policy Center.

“Everything else is getting squeezed.”

We applaud any and all advances in economic freedom.

But come the next crisis, we fear it too may get “squeezed.”

The abolition of cash, the freezing of bank accounts, negative interest rates, “helicopter money” — all are likely on the menu.

Only now has it recaptured sixth spot.