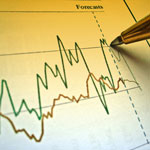 Three cheers for the Dow Jones Industrial Average!…or four, if you like.

Since setting its first new record high in more than four years last week, the beloved Blue Chips have marched ahead to six more record-high closes. In all, the Dow has advanced ten straight days — the longest winning streak since 1996!

One would think the economy is smelling like a rose…rather than pushing up daisies. But one would be wrong, as ZeroHedge pointed out last week.

On the day the Dow logged its first of seven straight new highs, ZeroHedge trotted out a kind of financial “The Way We Were” — comparing today’s economic conditions to that of October, 2007, when the Dow set its previous record high:

In other words, the Dow made a new record high despite the economy’s performance, not because of it.

Perhaps the stock market “knows” something about the future that is humanly unknowable. Perhaps it “sees” something that is invisible to the human eye. Perhaps it knows and sees the advent of a great economic revival. Perhaps.

So maybe it is not hope that is driving the stock market to record highs, but despair. Maybe stocks are rallying because investors are afraid to do anything else with their capital — maybe they are afraid to risk their capital in an economy that features zero interest rates, stifling regulatory regimes and capricious tax laws.

Bottom line; the Dow’s record-setting performance tells us nothing about “why.” The stock market is silent on this point. Perhaps it is too terrified to speak.

One thing we know; the rallying stock market stands in stark contrast to the bear market in economic vitality. We also know that bull markets are unfolding in all the wrong places. Unemployment, government debt, food stamp participation, “No knock” SWAT raids and “No trial” drone strikes are all in bull market mode.

The nearby chart tells part of the tale.

Each of these metrics, in its own way, reflects a government that is “hard at work.” The fact that the Dow, priced in gold, remains very far away from a record, suggests that Chairman Bernanke is working overtime. His dollar-printing escapades have played a very big hand in the Dow’s record-setting climb. By devaluing the dollar, in other words, Bernanke “inflated” the Dow price.

The doubling of both food stamp participation and drone strikes during the last five years reflects a different form of governmental hyper-activity. But this hyper-activity shares the identical DNA as Bernanke’s money-printing. All these activities express the genetic traits of a government that continuously expands its power “for the greater good,” a government that belives its influence enables progress, rather than impedes it, a government that considers itself so essential to the march of human civilization that it will dehumanize any individual and sanction any uncivilized act to achieve its objectives…for the greater good, of course.

Maybe that’s why the Dow is setting records…because big, intrusive, debt-financed governments are such a potent source of national prosperity. Maybe. But we’re still inclined to believe that “the government is best that governs least.”

Whatever the reason(s) for the Dow’s record-setting performance, your editor does not begrudge the Blue Chip Index its moments in the sun.