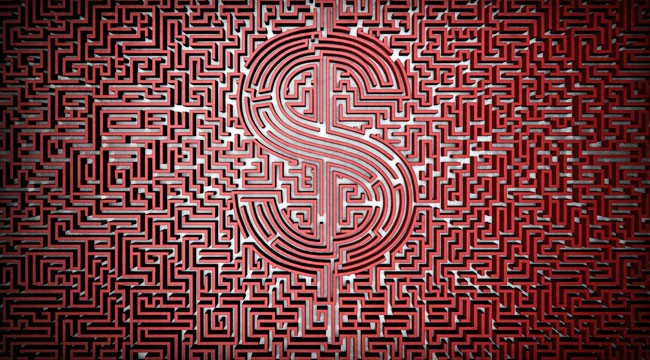 In Praise of Price Discovery

This morning’s market is more erratic than Claire Danes off her lithium. Gold is soaring, the euro’s plunging, US treasury yields are in free fall, junk bonds are faltering, copper is bouncing, oil has rolled over, the Russell 2000 momos are getting mauled, the swissie has shot the moon, the Dow is knee-jerking down, correlations are failing……and the robo traders are flat-out lost.

All praise the god of price discovery!

For six years financial markets have been drugged into zombiedom by maniacal central bankers who have violated every known rule of sound money and financial market honesty. In expanding their collective balance sheets from $5 trillion to $16 trillion over the past decade, for instance, they have midwifed a planet-wide fiscal fraud. Politicians have been enabled to spend and borrow like never before because central banks have swapped trillions of public debt for electronic cash confected from nothing.

Likewise, never have carry traders and gamblers been so egregiously pleasured by the state. After 73 straight months of ZIRP they are still pinching themselves, wondering if such stupendous largesse is real. They have bought anything with a yield and everything with prospect of gain, financed it for nothing and collected the arb — while being swaddled in the Fed’s guarantee that it would never surprise them or perturb their trades with unannounced money market rate changes.

And so they wallowed in their windfalls, proclaiming their own genius. Does a pompous dandy like Bill Ackman end up purchasing an absurdly priced $90 million Manhattan condo just “for fun” because markets operate on the level? Do his petulant brawls with other grand “activist” speculators like Carl Icahn mark investment genius or the machinery of honest capitalism at work?

No they don’t. There is absolutely nothing honest, productive or fair about the central bank dominated casinos which have morphed out of what used to be legitimate money and capital markets.

Indeed, all the requisites of stability, efficiency and honest price discovery have been destroyed by the monetary central planners. The short sellers have been eradicated. Downside insurance against a broad market swoon has become dirt cheap. Momo traders have thereby been enabled to earn unconscionable returns because their carry costs have been negligible and their hedging expenses nearly nothing.

Accordingly, the chart below of the S&P 500 since the March 2009 bottom does not represent a market at all; it traces the central bank enabled casino in full bloom, the buy-the-dips mania in overdrive. 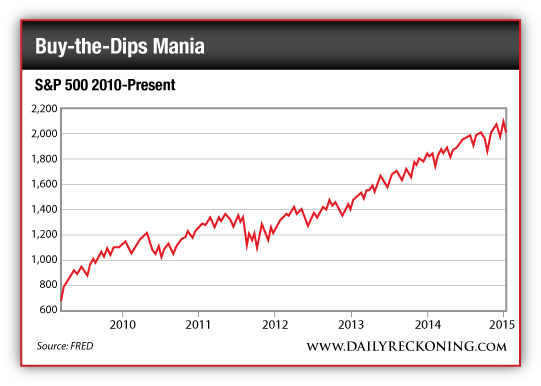 Behind this vast deformation was, ultimately, a simple proposition. Namely, that central banks were omnipotent, efficacious, purposive and reliable; that everywhere and always they had the “backs” of the gamblers and speculators; and that, above all, the central bank “put” was money good.

Here’s what it had come to. In about 84 months, the SNB’s balance sheet had expanded by 5 times. It now stands at nearly 100% of GDP, towering far above even the lunatic monetary emissions of the BOJ. 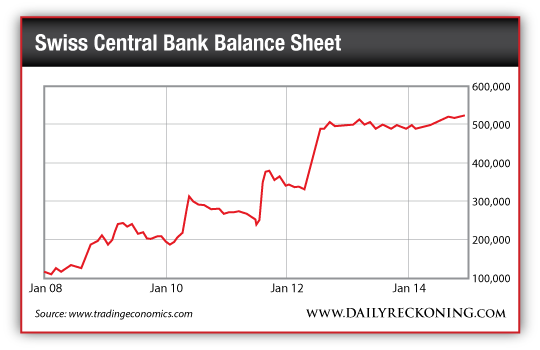 What happened yesterday is that the SNB confessed it was lying, faking, making it up by the seat of its pants. So doing, it unleashed financial hell.

Scroll down the Swiss stock exchange lists and find exporters, miners, industrials and techs down by 10-20% in a single day. Is it possible that some of these “names” had been in the portfolios of leveraged momo traders who are now getting heavy margin calls? The Lonza Group life science company, for example, had been up 4 times from its 2012 low and traded at 30 times. So when it lost 18% of its CHF value in a heartbeat yesterday, it was not just widows and orphans funds which were licking their wounds.

So too the army of carry traders who funded their speculations with zero cost CHF. They were ionized in a nanosecond because they were effectively “short” the swissie. But why not? They believed SNB Chairman Thomas Jordan’s incessantly repeated promise that the 120 peg would never, ever be removed — and most especially not in the dead of night, without warning.

And at least the professional speculators in the CHF should have known better. Now comes the millions of everyday central and eastern European householders who took out ultra-low interest mortgages denominated in CHF. They too should have read the fine print, but why bother in a world of central bank omnipotence?

Needless to say, Thomas Jordan is not the last central banker who has turned out to be a liar. He’s merely the first — with Mario Draghi already on deck. When he fails to deliver on “whatever it takes”, and that is a near certainty now, they will not even want him back in Italy to assume the ceremonial post of President.

Can it be that dozens of Italian banks, which loaded up on Italian government debt when ECB front-running speculators drove yields into the sub-basement, will now be reawakened to the process of price discovery?

Most assuredly they will. It was only Draghi’s seat of the pants lying that made the following picture possible. In an honest financial world, the debt of a ungovernable country on a fast track to bankruptcy could not possibly have experienced the stupendous rally of the last 30 months shown below. 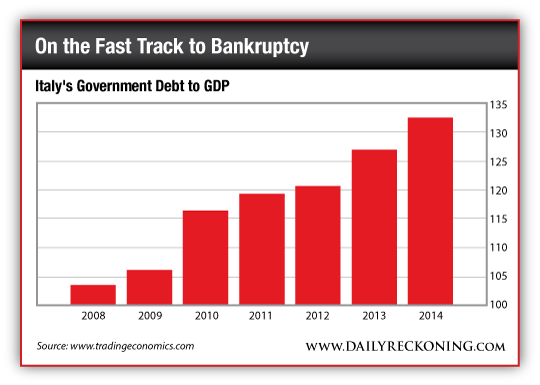 So let the price discovery begin. The global petroleum complex is already there. So is iron ore, copper and the most of the central bank bloated world of industrial commodities. The EM currencies are not far behind. Nor is the $9 trillion of vastly over-valued off-shore debt that was denominated in dollars and sold to yield hungry speculators.

Take a trip to Istanbul. Ask how the skyline of construction cranes will find the dollars to pay off the debt they have poured into still empty towers.

For that matter, can the Japanese monetary madhouse be far behind? Have not even the Shanghai market punters figured out that China’s $26 trillion tower of debt is already swaying precariously in the global financial winds?

Yes, the Swiss National Bank did ring the bell. Slowly at first, and then with a rush, the casino players will learn that the central banks have been lying all along. Then the lost art of “price discovery” will have its way.