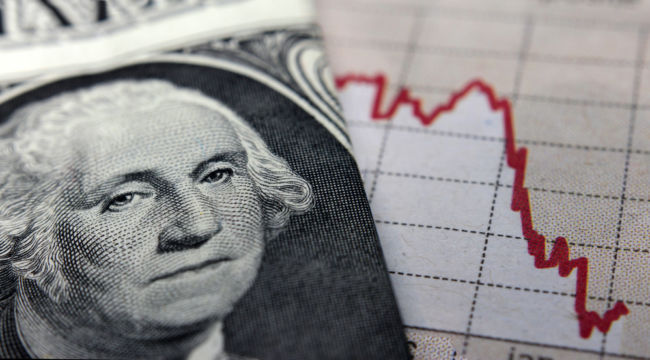 The Next Rate Hike Could Trigger Bear Market

Stocks spent much of yesterday in green territory — even after the news crossed the wires.

But at 2:30 p.m. Jerome Powell seized the microphone and spoke before a waiting press.

Shortly after he concluded his remarks, stocks were 180 degrees in the wrong direction.

But why? What did Mr. Powell say to frighten the horses — or what did he not say?

Markets apparently interpreted the omission to indicate the Fed may be nearing the end of rate hikes.

But what he said later sent markets to the rightabout…

Powell said the removal of the word “accommodative” signalled no change in Fed policy..

He added that “some asset prices are in the upper reach of historical ranges.”

Translation: Stocks are in the upper reach of historical ranges.

The implication being that additional rate hikes are in prospect so long as stocks remain in the upper reaches.

“I think as much the Fed and Powell, in particular, don’t want the market to interpret the removal of ‘accommodative’ as a signal that they’re near the end.”

The Fed also suggested it intends to raise rates in December… and at least three instances in 2019.

But is the Fed leading markets straight into the spinning blades?

As we’ve explained recently, December’s rate hike could take the fed funds rate above the “neutral” rate of interest.

The neutral rate is the interest rate that neither stimulates nor restrains.

Anything below the neutral rate pushes. Anything above it pulls.

Powell clearly believes the Fed is far from the neutral rate… that it has far more room to raise.

But analyst Barry Bannister believes the stock market has its finger on the neutral rate:

“Although some say the neutral rate is difficult to observe, stocks see the barrier quite clearly.”

When the Federal Reserve’s target rate rises above the neutral rate, trouble is on tap, says Bannister — at least since the 1990s.

Here we reintroduce the evidence. Observe the results once the fed funds rate (blue) crosses the neutral rate (red): 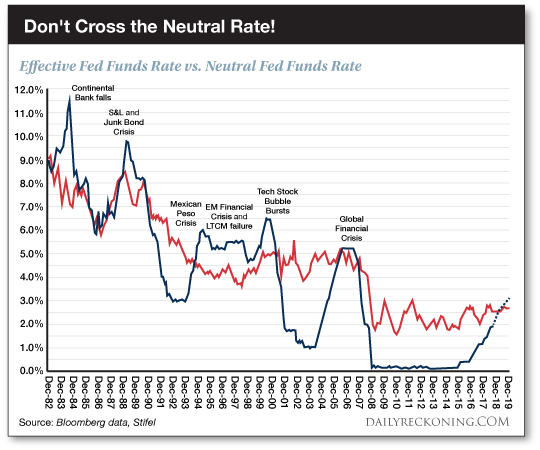 You can therefore expect a bear market within six–12 months, he concludes.

But what if the Federal Reserve has already tightened too much — December rate hike or no?

Fed policy takes time to worm itself through to markets — one year, even two years may lapse before entering effect.

Eric Basmajian is an analyst and founder of EPB Macro Research.

This fellow believes the Fed has already overdone it. Monetary policy is already too tight given economic conditions, he says, and the Fed is chasing shadows in the stock market:

… The Federal Reserve has already tightened monetary policy too far based on the economic data but the continued rise in the S&P 500 will push monetary policy past the point of no return.

Mr. Basmajian notes the monetary base is contracting at a current 8.3% rate year over year… and has “plunged” in recent months.

All is swell at present, he concedes.

With rates of money supply growth that are in free fall, the outlook for future growth is bleak. Monetary policy from the Federal Reserve is clearly biting. If monetary policy is the reason for the declines in the money supply, then further tightening actions will continue this trend and put M1 growth squarely in negative territory.

Monetary policy has likely already gone too far. It will take up to one year from the last tightening act for the full effects to impact the banking system and the economy.

And by the time the stock market responds?

By the time the S&P 500 responds, such aggressive policy will be hard to reverse when the economy needs it most.

We have suggested the bull market could run along until 2019 or 2020. The foregoing merely reinforces our preconceptions.

But as usual — the disclaimer is necessary — we grope in darkness, as do all.

The late author Eric Sevareid once remarked that he was pessimistic about tomorrow, while optimistic about the day after tomorrow.