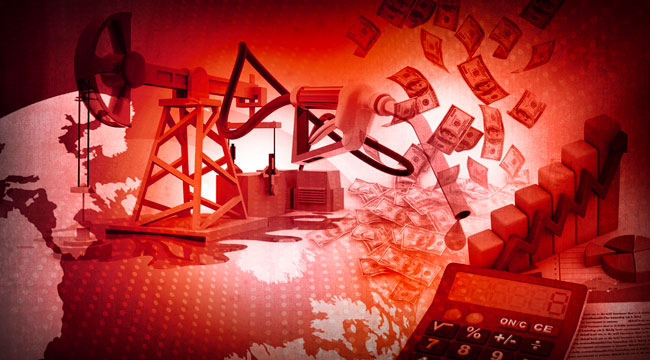 The price of oil has plunged nearly 40% since June to $65.63, and junk bonds in the US energy sector are getting hammered, after a phenomenal boom that peaked this year. Energy companies sold $50 billion in junk bonds through October, 14% of all junk bonds issued! But junk-rated energy companies trying to raise new money to service old debt or to fund costly fracking or off-shore drilling operations are suddenly hitting resistance.

And the erstwhile booming leveraged loans, the ugly sisters of junk bonds, are causing the Fed to have conniptions. Even Fed Chair Yellen singled them out because they involve banks and represent risks to the financial system. Regulators are investigating them and are trying to curtail them through “macroprudential” means, such as cracking down on banks, rather than through monetary means, such as raising rates. And what the Fed has been worrying about is already happening in the energy sector: leveraged loans are getting mauled. And it’s just the beginning. 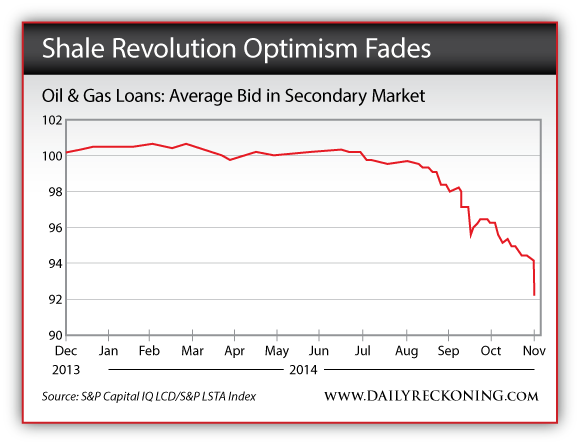 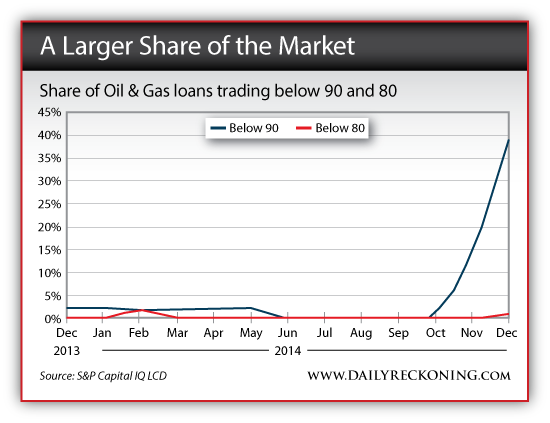 “If oil can stabilize, the scope for contagion is limited,” Edward Marrinan, macro credit strategist at RBS Securities, told Bloomberg. “But if we see a further fall in prices, there will have to be a reaction in the broader market as problems will spill out and more segments of the high-yield space will feel the pain.”

Smaller drillers are in trouble. All of them had horrific single-day plunges, some over 30%, on “Black Friday” after OPEC’s Thanksgiving decision to keep production quotas at 30 million barrels per day. By now, “Black Friday” has acquired an entirely different meaning in the oil patch than its classic meaning in retail. Traders who tried to catch these stocks have gotten their fingers sliced off since then:

These are the very companies that benefited during the crazy good times from yield-desperate investors who’d been driven to obvious insanity by the Fed’s interest rate repression. These investors — such as your bond mutual fund or your pension fund — loaded up on energy junk bonds and leveraged loans. And now the Fed-inspired financial house, where all risks have been eliminated by QE Infinity and ZIRP, is rediscovering risk.

Turns out, the Fed, so ingeniously prolific in buying financial assets to inflate their prices, can’t buy oil.

Companies in the sector are now facing a harsh reality: crashing revenues and earnings. Some of them are going to have liquidity problems. Unless a miracle happens that will goose the price of oil pronto, there will be defaults, and they will reverberate beyond the oil patch. And the consequences are felt far beyond the American oil patch.

Smaller drillers are in trouble. All of them had horrific single-day plunges…

But even the 43 largest, most diversified players in the energy sector that are part of the S&P 500 are grappling with the new reality: analysts chopped earnings estimates by 20.5% since September 30, according to FactSet. If this is final decline for the quarter — though the chopping is likely to continue — it will be the worst decline in EPS estimates since the first quarter of crisis-year 2009.

Exxon CEO Rex Tillerson told CNBC that his company could get by with $40 oil by refocusing on basics, “watching your cash, watching your investment decisions, being very disciplined about everything….” But he didn’t elaborate for how long. And lesser companies may run out of options, or cash, long before then.

The effects are already being noticed as a desperate feeding frenzy takes its course.