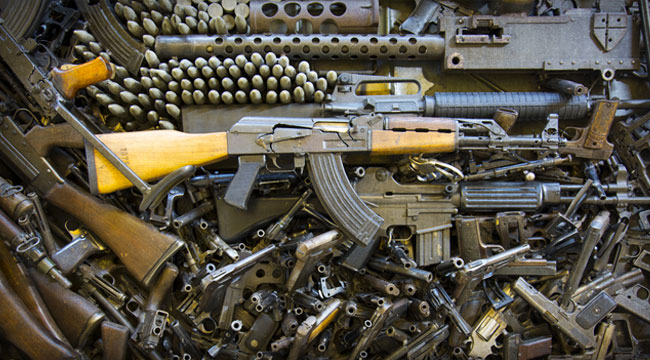 We wonder if the U.S. military has broken down “How to Make Bad Situations Incredibly Worse” into a science…

Because time after time when they get involved, you can almost predict what’s coming.

In fact, here’s a pretty reliable flowchart we found that runs through the usual process… 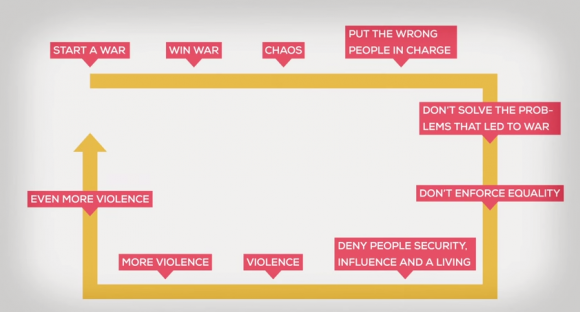 “We’re bombing the guns that we didn’t mean to give to ISIS because we didn’t give guns to their enemies because then ISIS might get guns.”

One brain boggling sentence from a Vox article sums up our current boondoggle in Iraq.

When Obama first announced U.S. airstrikes in Iraq, he failed to mention that the U.S. would, in the process, destroy millions of dollars of American military equipment.

We have a hunch he left that part out for a reason.

From 2003-2013, the US military spent a ton training the Iraqi army in combat. They also armed them to the teeth with guns, tanks, jeeps, artillery, and more.

This was an army, you’ll recall, the military just finished destroying in the U.S.-led invasion of Iraq.

Morale, we’re sure, was at an all-time low.

It shouldn’t have been a surprise, then, when all that training and team spirit-building weaponry ended up in vain. When ISIS invaded northern Iraq from Syria in June, Iraqi forces barely shot a shell. They immediately deserted or retreated, abandoning the millions of dollars of American equipment.

Ironically, these abandoned weapons were much better than those the U.S. refused to give Syrian rebels months earlier. The U.S. military didn’t want them to fall into the wrong hands… namely the hands of ISIS.

Instead, the ever-brilliant government planners simply put all their chickens in one coop — in Iraq. And handed ISIS the ranch.

And after the Iraqis fled, ISIS scooped up all the high-tech American toys and used them to seize cities in Iraq and terrorize its citizens. It also allowed them to plunder hundreds of millions from captured banks…

Making them the richest terror organization on Earth. 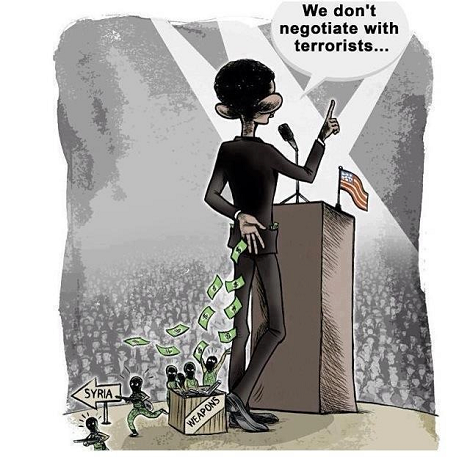 Alas, the absurdity continues: The US then had to intervene on behalf of the Iraqi Kurds. The Kurds were fighting with old and rusty Russian-made weapons against ISIS’ fancy new American-made weapons.

Ahhhh… the smell of government inefficiency in the morning.

“We can’t erase every trace of evil from the world, and small groups of killers have the capacity to do great harm,” Obama said in response to threats from ISIS (or, as the House likes to call them now, “ISIL”).

“ISIL is a terrorist organization, pure and simple. And it has no vision other than the slaughter of all who stand in the way.”

This sounds familiar, no?

It’s the same black-and-white rhetoric that got us into this mess. Good guys versus the “evildoers.”

“There can be no reasoning — no negotiation — with this brand of evil,” Obama said yesterday in a speech to UN delegates.

“These radicals have declared their uncompromising hostility to freedom,” Bush said in a 2006 speech to Congress. “It is foolish to think that you can negotiate with them.”

Just replace Obama’s “network of death” with Bush’s “axis of evil” and… waddya’ know… it’s 2002 all over again. 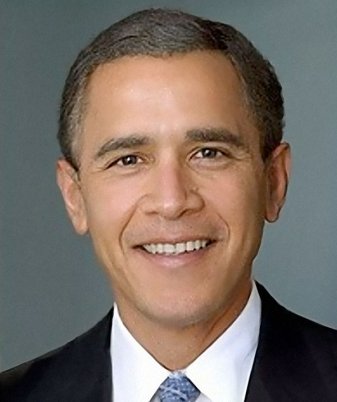 Fighting the Network Axis of Evil Death Since 2001

There’s another, more rational, approach to this situation. And it comes right out of the pages of Sun Tzu’s Art of War…

“Even if we defeat ISIS itself, but don’t understand its appeal, it will only reappear in another, potentially even more deadly form, just as ISIS now appears more malignant than al-Qaida,” Paul Rosenberg writes at Salon.

“This is particularly true if we ignore the multilayered network of historical grievances which ISIS seeks to exploit.

By blindly blowing ISIS to bits, we’re treating symptoms of the problem, Rosenberg says, and staying away from the cause.

It’s similar to having a kitchen full of cockroaches because you left food to rot on the counter. But instead of cleaning up your act, you just sprinkle poison on the rotten food.

“On the other hand — and this is crucial — if we do take the time to try to understand ‘pure evil,’” says Rosenberg, “we will inevitably discover things about it, which can ultimately help us defeat it.

“This is not, as some might would suggest, a namby-pamby liberal view of the world. It comes directly out of Sun Tzu’s Art of War:

“The way out of such madness is surprisingly simple,” says Rosenberg “– simple to state, but extremely difficult to translate into action: We must hold onto our humanity, when those who hate us are doing everything conceivable to get us to abandon it.

“When ISIS shows the world a video of them beheading an innocent civilian, they are doing their best, not to appear evil, but to draw us into the very same evil that we see in them.

“Seeing such evil, it is extremely difficult to resist the urge to utterly destroy it — and yet, the only sure way to destroy such evil over time is not to recreate it in ourselves, by our own similarly sweeping actions which will inevitably involve the deaths of innocents, as they already have in the past, excused by the phrase ‘collateral damage.’

“We ought to know by now: One man’s collateral damage is another man’s holy martyr. Surely, at this point, we have had more than enough of both.”

Dubya seemed like he almost “got it” at one point in 2002. But as quick as that light bulb popped on, it was out in a flash.

“The best way to fight evil is to do some good,” he explained in Knoxville in April 2002.

“Let me qualify that…”

[This is where it starts heading downhill] 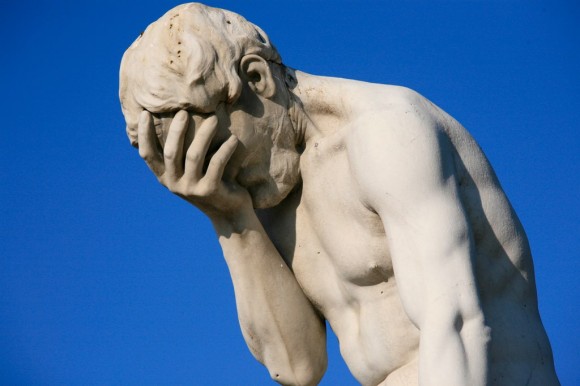 Ed. Note: This is only part of the story… The conversation continued in today’s issue of Laissez Faire Today with a discussion of overreaching government bureaucracy, a short missive about digital currency and a handful of responses to the marijuana legalization debate. And there were even some investment opportunities thrown in for good measure. It was too much to include here, but if you’d like to join the conversation for yourself, you can sign up for FREE, right here.