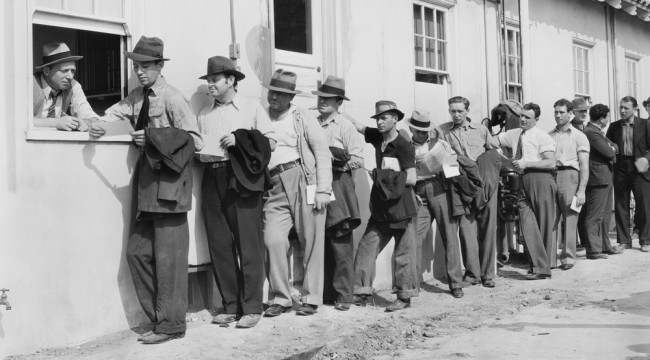 The BLS claims the economy added 242,000 jobs in February.

But the Labor Department bureaucrats did not go out and actually count 242,000 new jobs or even extrapolate them from a valid, scientific sample survey.

They never even left their cushy offices. They just plucked these numbers from a computer model!

They just fit a projection line to the trend of the last several years, then gussied up the results with even flakier seasonal maladjustments, re-estimates and a lot more statistical shenanigans.

Why waste $600 million per year on the BLS when a couple of staffers and a laptop computer at the Democratic National Committee could produce the same propaganda? An intern or two at CNBC’s bubblevision headquarters in Englewood Cliffs, New Jersey could do the same.

Either way, Steve Liesman of CNBC and Barack Obama of the White House would still be crowing about how awesome things are on Main Street. On that score, our clueless lame duck President left nothing to the imagination with respect to Friday morning’s fiction:

Let’s see. It would appear that a few pages fell out of Barry’s briefing folder before he rushed to the press room. That is, just about anything that measures what is actually happening in America is not “pretty darn good” at all.

Just try this one for a smell test. The BLS claims education jobs are blossoming. But is it really possible to believe that private “educational services” jobs — which encompasses everything from swank private days schools to ridiculous for-profit tuition mills — have been growing at the exact pace of 62,000 jobs per year since 2006?

That’s what they’d have you believe.

C’mon. This huge jobs category covers literally hundreds of thousands of institutions from Podunk Iowa Day School through Harvard Law School. The odds that employment grew by almost exactly 62k for the last three years lies somewhere between zero and none.

Likewise, try jobs in the BLS category called “outpatient care centers.” Here the magic 10-year trend is 29k per year. That compares to 31k jobs gained in February 2016 over the prior year. And a gain of 33k and 29k in the two years before that, respectively.

Right. It reminds you of the dim bulbs in your high school class who stole the answers to the final exam and weren’t smart enough to get one or two questions wrong to cover their tracks. These nitwits are just chasing statistical shadows.

But shhh! Don’t tell the modelers.

Let’s break it down a little more. The BLS claims there were 86k new jobs in education and health, 48k in hospitality and leisure and 55k in retail. These categories alone add up to 190k or nearly 80% of the supposed job gains. But for the most part they represent part-time work and bottom-of-the-scale pay levels.

By contrast, there was a loss of 19k jobs in high-paying energy and mining jobs, a drop of 16k in manufacturing jobs and only hairline gains in the other principal full-time, full pay categories.

For example, there are a total of 8.2 million jobs in FIRE (finance and real estate). But the gain was a miniscule 6k.

And there are 6.6 million jobs in construction. But the BLS reports a gain of just 19k. And all of that was due to a bogus seasonal adjustment factor. And in the huge business and professional services category (20 million jobs), the gain was a scant 23k.

Not the picture of a booming economy.

The only meaningful number on the short-run employment trend is the daily withholding taxes collected by the IRS. The information is published for all citizens to see. No business in America withholds taxes for phantom employees. And if they hire 20-hour-per-week part-timers versus 40-hour regulars, the withholding data reflects half jobs, not whole jobs.

And only real businesses send taxes to the IRS. So… did the real employers of America send real wage withholding taxes to Washington conveying an economy that’s “pretty darn great”?

No they didn’t. If wages are growing at about 2% per year, the implied quantity of labor hours generated in the U.S. economy during February was aboutnegative 2%.The real world data, therefore, reflects not “awesome” — but an economy slipping into recession.

But based on the BLS’ monthly noise emission, the White House claimed there was no recession in sight.

One more point: What really matters on the jobs front is the trend of jobs growth over reasonable periods of time, not standard 40 hour work weeks punched into a time clock.

In fact, notwithstanding the random noise of the monthly numbers, the February report makes it clear that there is nothing awesome about the U.S. labor market at all. We have focused consistently on what we call “breadwinner jobs,” which on average pay about $50,000 on an annualized basis.

But once again the February level is still one million jobs short of where it was way back in December 2007 on the eve of the financial crisis.

The point here is that the business cycle expansion is not going to last forever. And at 81 months it is already extremely long in the tooth compared to the 61-month post war average.

And with 58k breadwinner jobs recorded in February, it would take another 31 months just to get back to the level achieved in early 2001! The odds that we will not have another recession during that span are not compelling, to say the least.

So Washington and Wall Street can celebrate the Friday jobs report all they wish. But it doesn’t change the fact that massive money printing and unspeakable growth in public debt since the turn of the century have produced what amounts to a bread and circuses jobs market.

That’s been the longer-term trend since the start of the Great Recession in December 2007. The U.S. now has 1.6 million more waiter/bartender jobs. Regarding manufacturing jobs, not so much.  In fact, there are now actually 1.4 million fewer such jobs.

But even that understates the reality. The manufacturing jobs lost represent about $80 billionannually in reduced wages. The waiter/bartender jobs gained, by contrast, represent only $30 billionin annual wages.

Now, it is true that Barry went to Harvard Law School where there isn’t much emphasis on math skills.

It’s hard to say what CNBC’s Steve Liesman’s excuse might be — but his mission to endlessly parrot the Wall Street narrative that it’s always time to buy stocks probably explains it.