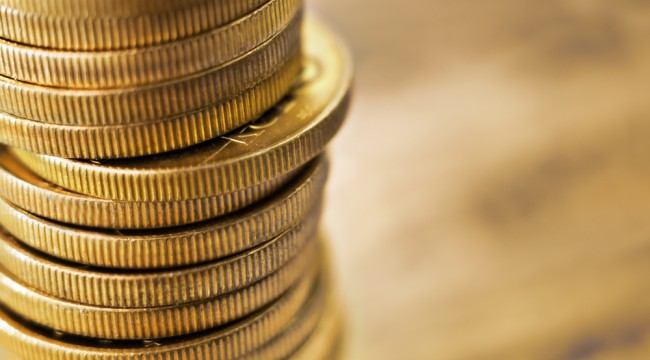 No Time to Buy Cheap Stocks

“What you’re now seeing,” said President Barack Obama on March 3, 2009, “is profit and earning ratios are starting to get to the point where buying stocks is a potentially good deal if you’ve got a long-term perspective on it.”

OK, so his handlers couldn’t drill the lingo into him quite right. We presume he meant “price-earnings ratios.” 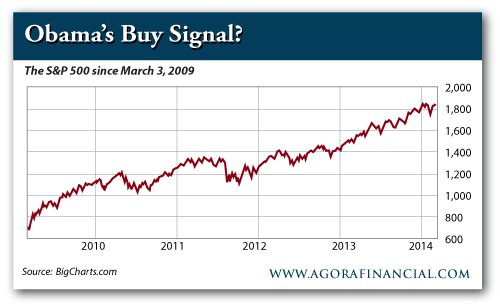 Gee, it’s almost as if he knew something others didn’t…

In theory, FASB is a private nonprofit entity. In reality, it is highly subject to political influence. On March 9 — the very day the S&P bottomed — word slipped out from Washington that Reps. Barney Frank and Paul Kanjorski planned to schedule a subcommittee hearing clearly aimed at strong-arming FASB into changing the rules.

Which it did three weeks later.

So five years and 178% later, how about those P/E ratios?

“Starting valuation is crucial to your investing results,” 5 Min. PRO strategist Dan Amoss reminds us. “For long-term investors not interested in trading, overpaying for stocks near the peak of bull markets is a surefire way to lose money. Secular, or long-term, bull markets are best defined as a period of rising valuations, while bear markets are the opposite.

“Near bull market peaks, investors become so optimistic that they pay silly earnings multiples for stocks. A simple way to view a P/E multiple is the ‘payback period’ for the return of the capital you part with in order to buy a stock.”

Dan recently spotted a paper by James Montier at asset manager GMO. It argues investors in the S&P 500 should expect negative returns between now and 2021. 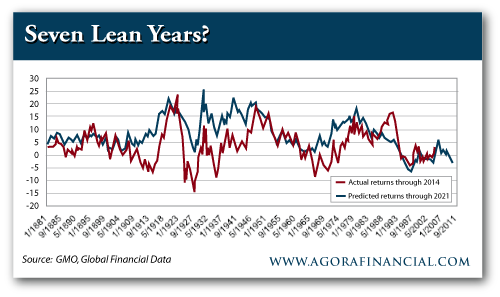 “In that scenario,” Dan explains, “the S&P would fall from today’s 1,850 to 1,470 in the year 2021. There would probably be lots of steep declines and sharp rallies in the interim. But Montier’s point is clear: The S&P 500 faces a strong valuation head wind.”

“For those of us who like to buy our stocks cheap, this may be the worst opportunity set in 25 years,” chimes in our value maven Chris Mayer.

Chris spotted the following chart from Farnam Street Capital, comparing the present moment with the peak of the dot-com bubble in 2000. “Back then, the ‘average’ stock was more expensive than now on an earnings basis. But it was easier to find stocks that were not expensive.

“Today, there are fewer stocks in the cheap end of the curve — at least on an earnings basis. 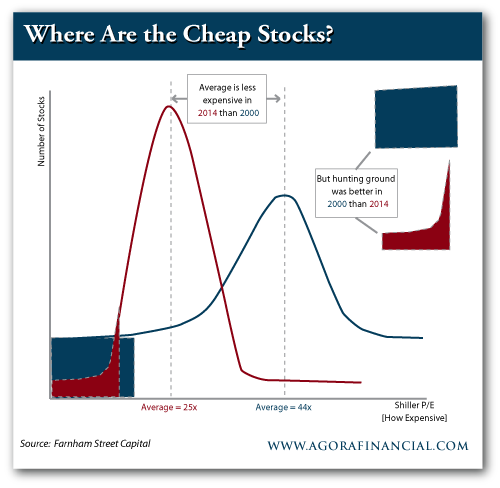 “If you want a graphic reason why finding cheap stocks is harder now, this is as good as any I’ve seen. It pays to wait and be patient.”

P.S. Regardless of where the market decides to go between now and 2021, there will be always be ways to safeguard and even grow your wealth in the process. To gain exposure to specific opportunities that will help you do just that, sign up for the FREE Daily Reckoning email edition, right here.

Stocks have started off this week pretty flat. But is more volatility to come as the week progresses? Today, Dave Gonigam takes a look at a few scenarios for the rest of this week, and for 2014 as a whole – specifically relaying what one analyst sees as the two main forces currently driving the market boom. Read on…