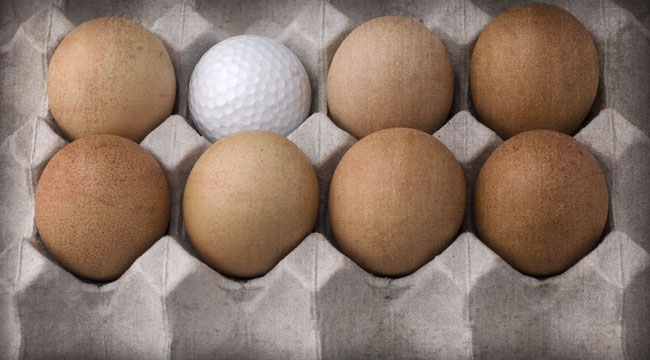 New Index Points to a Steep Drop in Asset Prices

If you take an egg and drop it on the floor, it breaks. An egg is fragile. A golf ball, by comparison, is less fragile. It takes a lot more force to crack a golf ball.

What if we could build an index that captured fragility in some way? What would it tell us about asset prices now?

A brand-new research paper tried to answer these questions. One conclusion from the paper: The business sector is creeping up to levels of fragility not seen since 2007.

Below, we take a look at this new research.

To back up: Our publisher Addison Wiggin recently created Apogee Research Group. The idea is to commission studies to answer big questions about the financial system. Then we’d publish our findings, which we hope would lead to useful insights for investors.

I wanted to commission a study on fragility. I had been rereading the works of economist Hyman Minsky (1919–1996) over the past year. Minsky crafted the famous “financial instability hypothesis.” It is an elegant framework that explains economic instability by focusing on how economic units — firms, households and banks — finance themselves. (Instability here means the propensity to generate sharp falls in prices of assets. Essentially, fragility.)

Minsky created three types to describe the financing shapes these units could take: hedge, speculative and Ponzi. Let me use the example of a household to show you how this works.

It should be clear that an economy dominated by hedge finance is less fragile than one in which Ponzi dominates. These are the basic building blocks of Minsky’s idea and lead to his first theorem:

It is important to note that debt per se is not a source of instability. It is debt in relation to cash flows and other assets. Fragility also takes into account the sensitivity of financing structures to change. So generally speaking, a 30-year mortgage locked in at low interest rates is much less a force for instability than a one-year note with variable interest.

Minsky’s hypothesis also shows how economies transition from stable to unstable (or fragile), or how golf balls can become eggs. This gets to the second theorem:

The key idea here is that periods of calm encourage risk-taking. The economy itself generates instability from the profit-seeking actions of firms, households and banks. The government, too, can be a source of instability.

Inspired by Minsky’s idea and a paper by Eric Tymoigne (“Measuring Macroprudential Risk: Financial Fragility Indexes”), I wanted to see if we could build a model of instability and track it over time. So we commissioned Stephen Jones to do the work. He is an independent researcher with a long and varied career in finance.

The result is a paper he titled “Measuring Minsky,” which we will publish soon. Jones modeled indexes for broad sectors of the economy. I don’t want to get deep in the technical aspects of this project. At this point, I’d rather just focus on one finding, which is rather interesting.

Let’s focus on the nonfinancial business sector. This excludes banks, insurers and the like. Jones created a composite of seven different factors. These factors measured things such as how well firms covered their interest expense and how much liquid assets they held compared with debt. And Jones stretched back the data to 1950. 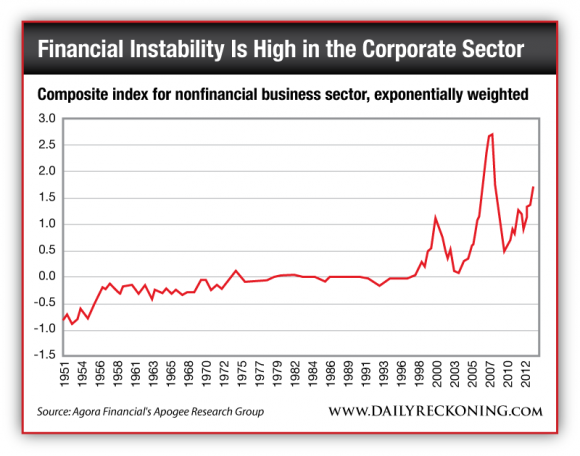 This makes intuitive sense as it relates to the last two decades. The composite also shows how epic the run-up to the 2008 financial crisis was and how it went beyond just housing and banks. The whole economy was one big egg.

The drive higher in the last few years also supports the anecdotal evidence I’ve written about in these pages before. We’ve seen a sharp rise in junk bonds, for example. Last year was a record for issuance of these risky bonds, topping the record set in 2008. The list of incidents of speculative behavior is long.

The end result is a state of instability unmatched since the 2007–08 peak.

Note: This isn’t a stock market forecast. The market could go up or down, regardless of what these things say. This is simply an attempt to measure fragility. The index says the possibility of a sharp reduction in asset prices is high.

“It will be interesting to watch,” Jones wrote in an email to me, noting how the model’s variables show no easy way out. For example, higher interest rates would push the index into even higher risk territory, all else being equal. But rates seem unlikely to move lower (which would bring the index down). “In other words,” Jones wrote, “it is almost a bit ‘trapped’ into either going higher or experiencing a correction in valuations.”

When the paper comes out, you’ll be able to dig into the guts of the indexes, if you want. You’ll also be able to see the indexes for the other sectors, such as housing. But the main finding, I think, is the high and increasing fragility of the corporate sector.

As an investor, this has at least a couple of implications.

I think the most important is that in a world of eggs, you should own the golf balls.

In practical terms, this means investing in companies with an excellent financial condition. This is in part a defensive posture, because it means companies that meet those standards won’t have to sell assets to make ends meet if credit dries up. They can ride out the tough times. But it’s also an offensive play, because such firms can take advantage of instability.

The classic example of a company with a super strong financial condition that can take advantage of instability is Berkshire Hathaway (NYSE:BRK.B).

But a much more interesting and remarkable example of excellent financial condition is Madison Square Garden (Nasdaq: MSG). The company famously owns real estate as well as the Knicks, Rangers, a cable network and a bunch of other stuff. It has no debt at all.

This is very unusual for a property company. I hold the stock in my Mayer Special Situations portfolio. Our cost basis is $23.55 per share. They trade for $61 today. But don’t worry, I think the shares are worth at least $85 per share.

It’s something to consider while you’re waiting for us to publish the full “Measuring Minksy” report. Until then…

P.S. There are plenty more golf balls out there, you just need to know where to find them. I’ve made it my mission to do just that, and I’ve spent countless hours of research and analysis finding the best of them. In today’s issue of The Daily Reckoning email edition, I gave readers a chance to get in on this research for themselves, including all the potential profits that come with them. These kinds of opportunities are available in every single issue of the FREE Daily Reckoning, so if you’re not currently getting it, you’re missing out. Sign up for FREE, right here, to ensure that never happens again.