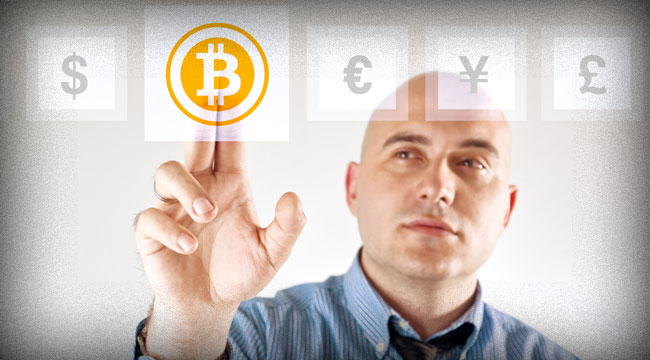 What the Mainstream Doesn’t Get About Cryptocurrencies

I’ve been writing about cryptocurrencies and bitcoin for many years.

I am an interested observer, not an expert. As an observer, it seems to me that the mainstream — media, financial pundits, etc.– generally don’t grasp the dynamics driving bitcoin and the other cryptocurrencies.

What the mainstream does get is speculative frenzy. New technologies tend to spark speculative manias once the adoption rate exceeds a critical threshold, and opportunities to buy into the new technology become available to the general public.

Just as radio and the Internet sparked speculative manias in their boost phase, cryptocurrencies have sparked their own speculative frenzy.

But where the mainstream goes wrong is assuming that’s all there is to bitcoin: a speculative mania.

The Establishment often dismisses transformative technologies as fads or gimmicks. Thus the infamous rejection of photocopy technology as only of interest to a dozen large corporations, personal computers belittled as being of limited utility (storing kitchen recipes), and so on. There’s also Paul Krugman’s famous obituary for the Internet in the late 1990s.

Skepticism is always a wise default position to start one’s inquiry. But if no knowledge is being acquired, skepticism quickly morphs into stubborn ignorance.

And cryptocurrencies are not the equivalent of Beanie Babies. Cryptocurrencies have utility value. They facilitate international payments for goods and services.

The primary cryptocurrencies (bitcoin, Ethereum and Dash) have transparent rules for emitting currency. The core characteristic of a scam is the asymmetry between what the seller knows (the product is garbage) and what the buyer knows (garsh, this mortgage-backed security is low-risk — look at the rating).

The mainstream also misses the core driver of bitcoin and cryptocurrencies: the current financial system is doomed.

Those who get on board alternative arrangements early will likely preserve more of their wealth than those who believe the current system is permanent. And some may earn great wealth as capital flees the sinking ship of central banking/credit for more secure climes.

Most people sense that an Elite that lies when it gets serious cannot be trusted. As all the internal contradictions and excesses of the present financial system weaken its foundations, Elites must obfuscate, lie and manipulate via gamed statistics, false narratives and media spin lest the increasing instability panic the unsettled herd.

The third dynamic the mainstream misses is the potential role of bitcoin in preserving the wealth of the very Elites who best understand the weaknesses of the present financial system. A number of very smart people assure me the U.S. government can (and will) shut down bitcoin overnight by restricting or outlawing exchanges’ access to the banking systems’ payment platforms that enable people to exchange bitcoin/fiat currencies.

My response is this question: what will best serve the interests of the wealthy and super-wealthy?

If this sucker’s going down, to quote former President G.W. Bush, those with wealth and political power are not going to allow regulators to seal an escape hatch that might serve their goal of wealth preservation.

The current interest of hedge funds and other managers of wealth in cryptocurrencies suggests this is precisely how they’re being perceived. This interest will only increase as the seams of the current financial system start unraveling.

If cryptocurrencies are perceived as a threat to Elite wealth preservation, the Elites will deploy their political power to suppress them. But I consider this unlikely, for a reason rich in irony:

Their independence from the central bank credit system that has enriched the few at the top of the pyramid is the very reason they offer more stability than the doomed-to-devaluation credit-bubble currencies.

Given Bitcoin’s tiny share of global wealth, how much of a threat can it pose to the super-wealthy elites?

I suspect the big wealth managers are only beginning to get interested in cryptocurrencies. The Early Adopters tend to be small players with larger appetites for risk than the institutional players.

I’ve marked up a chart of bitcoin: notice the previous two periods of volatile upswings and downdrafts. The 30+% swings appeared monstrous at the time, but looking back, they look more like blips. 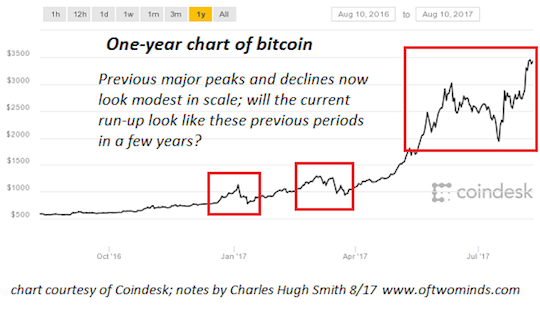 What will the current dramatic run-up, sharp decline and new high above $3,400 look like from the heights of $10,000?

Some analysts say Bitcoin and some of the other cryptocurrencies are in a bubble. But bubbles occur when everyone and their sister is buying into a “hot” market. Bubbles pop when the pool of greater fools willing and able to pay nose-bleed valuations runs dry.

In other words, when everyone with the desire and means to buy in and has already bought in, there’s nobody left to buy in at a higher price (except for central banks, of course).

At that point, normal selling quickly pushes prices off the cliff as there is no longer a bid from buyers, only frantic sellers trying to cash in their winnings at the gambling hall.

When only one of your circle of acquaintances, colleagues, friends, neighbors and extended family own an asset, there is no way that asset can be in a bubble. That’s because the pool of potential buyers is thousands of times larger than the pool of present owners.

The skeptics will continue declaring bitcoin a bubble that’s bound to pop at $4,000, $5,000, $10,000 and beyond. When the skeptics fall silent, the potential for a bubble will be in place. But that is not the case today.

Of course, the sources of great future fortunes are only visible in a rearview mirror.

And the real demand for cryptocurrencies will not be known until a global financial crisis guts confidence in central banks and politicized capital controls. Only then will we know for sure how the financial and political Elites will view them: as a threat to their wealth or as a lifeboat with precious few seats.