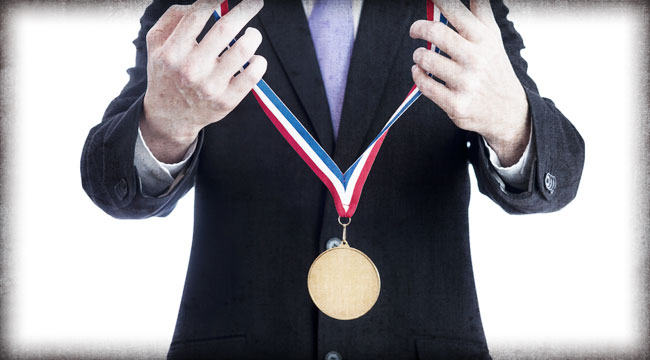 I remember, because it is seared into my memory, every detail of the day when I watched, in total disbelief and screaming outrage, as Janet Yellen testified in front of Congress. She is, of course, the new head honcho at the evil Federal Reserve, taking over after the spectacular failure of her predecessor, the laughably benighted Ben Bernanke, and she said, frying precious neurons of my already-depleted brain (“zzzt!”) the words, “Inflation remains below our longer-term objective,” which, as it turns out, she means 2 percent inflation in prices!!

If you do not understand the significance of the double exclamation points, then you are NOT a Junior Mogambo Ranger (JMR), and thus you are ignorant of the Austrian school of economics, and also thus you do not know that 2 percent inflation is something terrible, as the historical cutoff for inflation has always been 3 percent.

Above 3 percent inflation rate, calamity awaits, which kind of rhymes, so you know it must be true, in case the entire historical record of the world is not enough to convince you that anybody deliberately pursuing the pernicious poison of price inflation is either evil or a moron, and being driven by the absolute desperation resulting from behaving like monetary idiots for the last half-century is no excuse.

Of course, Janet Yellen has long been a proponent of inflation-targeting, and that is one of the reasons why I am so dismissive of her bizarre, mutant intelligence, which seems to be centered around spewing that whole Keynesian “stimulus spending” load of crapola, even though Keynes has been discredited so many times, for so long, that it seems impossible that anyone would still be a Keynesian economist.

So, why is she like that? Being that the Winter Olympics are being held right now, perhaps that is why I thought of “stimulus spewing” as an Olympic sport, which brings up the question “How is stimulus spewing scored, and what are the rules of stimulus spewing?”

…higher costs are not being offset with increases in income, as “median income has only risen 1% each year…”

The question seems stupid, and it is, but, then again, why not? Merely have Olympic stimulus spewing scored by how much price inflation per 4-year Olympic cycle that the monetary inflation causes!

Alas, Janet Yellen’s apparent quest for an Olympic gold medal STILL doesn’t explain why she is so deliberately, so shamelessly, so horrifically evil that she is willing to punish poor people and the middle class with higher and higher prices, year after year after year! Evil, I tells ya!

Laughably, and perhaps ironically (although I am not sure what “ironically” means anymore, if I ever did), she actually said this “I want inflation because I hate you and your nasty children” venom almost literally at the same time as she was proudly reiterating the “missions” of the Federal Reserve, the first of which is, of course, “price stability,” and is obviously defined as “when inflation in prices is zero.”

Now, you may not know it, but you are talking to a guy who happens to know for a fact — a fact! — that stability means “zero change,” and I know it for a fact — a fact! In fact, the same fact!– because of a very embarrassing Quarterly Employee Review one time where my supervisor wrote that while my attendance and attitude had “Deteriorated markedly,” she also noted that “Job performance, such as it is, is stable,” which meant, as I subsequently learned in the course of the evaluation, was, “No change. You’re still the worst employee I have.”

Leaving aside, for the moment, the crippling damage done to my fragile ego by such a hasty judgment by some boss whom I rarely even saw because I was usually goofing off somewhere else every time she came looking for me, probably to whine about some deadline I missed, or some stupid report I forgot about writing, or about some lowlife, deranged, lying piece of crap client complaining about something I did, or did not, do, but note that — ergo! — and for the record, “stability = zero change”!

Ms. Yellen, seeking 2 percent inflation, is saying that she does not understand this concept, but compensates by hating your guts and your entire family. And if you watched any of her testimony, you could tell by the nervous way she acted that, if she could, she would gladly come over to your house and kill you and your whole family, including puppies and kittens and baby bunnies, and steal your house and assets outright, instead of having to go through the hassle of defending a disastrous monetary policy, although the Federal Reserve has been such a disastrous failure for the last half-century that (pausing for breath) We’re Freaking Doomed (WFD) no matter WHAT she does.

Instead, she is going to make sure that all your assets (including all your cash, your retirement plan, your house and all your investments), which are denominated in dollars, LOSE at least 2 percent of their buying power Every Freaking Year (EFY).

Inflation in prices is already so high that the minimum wage is being increased again out of “necessity,”, which will make the problem worse: Paying higher wages means the employers are going to raise prices to restore their profit margins, or replace workers with technology and robots, or both.

And it is not only insane monetary inflation that is causing price inflation, but the old supply/demand dynamic is being upset mightily, too!

Michael Snyder at theecohomiccollapseblog.com asks, “Did you know that the U.S. state that produces the most vegetables is going through the worst drought it has ever experienced, and that the size of the total U.S. cattle herd is now the smallest that it has been since 1951?” Ever! Worst ever! Going back to the late 19th century!

And there is a lot of evidence, such as in tree rings, that California has been extraordinarily wet for most of the 20th century, and that, statistically at least, it is possible that the California drought could continue for another 200 years! What is THAT going to do to prices? Hahaha! I’m surprised you asked!

Already, CBSNews.com, reports that “While the government says prices are up 6.4 percent since 2011,” which is where I insert that the government is a lying, cheating, manipulating piece of low-IQ crap and we can’t believe anything they say. Having said that and feeling better for it, we continue where we left off, with “chicken is up 18.4 percent, ground beef is up 16.8 percent and bacon has skyrocketed up 22.8 percent,” which jibes pretty well with shadowstat.com calculating that inflation in prices is, and has been, running about 8 or 9 percent.

As reported by breitbart.com, higher costs are not being offset with increases in income, as “median income has only risen 1% each year, while the cost of college tuition has climbed 6% to 8% every year for at least forty years.” Forty years!

And remember Olympic stimulus spewing, the new sport so memorably introduced above? Well, another way to score stimulus spewing is the results of price inflation (particularly vis a vis stagnating incomes) causing the number of adults under the age of 35 that live at home, with his or her parents, instead of being out living on their own, throwing wild parties lasting the whole weekend until I finally puke and crash on their sofa.

It’s now 29 percent, so they say. Almost one in three!

In other depressing news, rising prices reduces disposable income, and part of the effect is that it now takes as long for car dealers to sell a new car as it took in 2009, which was the year after 2008, which is when bubbly things went so badly from decades of Federal Reserve mismanagement that the Federal Reserve completely lost its mind and began quantitative easing on the scale of trillions of dollars per year, on the insane Keynesian theory that two wrongs (creating the original debt and the increase in the money supply to keep it afloat) make a right.

And homebuilding permits and applications have collapsed.

And total debt (government and private) are all at new record highs.

And the idiocy of Obamacare continues destroying a sixth of GDP.

In summary, if ever there was a Sign From The Mogambo (SFTM) to buy gold, silver and oil, the red-lining of my Mogambo Fear And Paranoid Meter (MFAPM) could very well be it. If everything collapses tomorrow, or even this year, then we’ll know for sure. Otherwise it’s a reliable leading indicator.

So, obviously, with iron-clad, indisputable proof like this, you should be buying gold, silver and oil stocks in some desperate, clutching-at-straws, frightened, feral frenzy, a path so clearly indicated by the reference to the infallible MFAPM in the very preceding paragraph.

And with that kind of proximity to the best advice you ever got, you can hardly say that you forgot, which kind of rhymes too, again proving it’s all so, so true!

Ed. Note: With every appearance The Mogambo Guru makes in the pages of The Daily Reckoning, in addition to his inimitable style, he stresses the importance of knowing what to do as government stupidity threatens to destroy your financial stability – not to mention the financial stability of the entire US economy. And since he refuses to keep quiet – no matter how much people tell him to “pipe down” – The Daily Reckoning will continue to feature him, in hopes that someone will hear his Mighty Mogambo Message (MMM) and use it as a sign to protect themselves from the economic collapse that threatens us all. Sign up for the FREE Daily Reckoning email edition, to read the Mogambo’s warnings before almost anyone else.