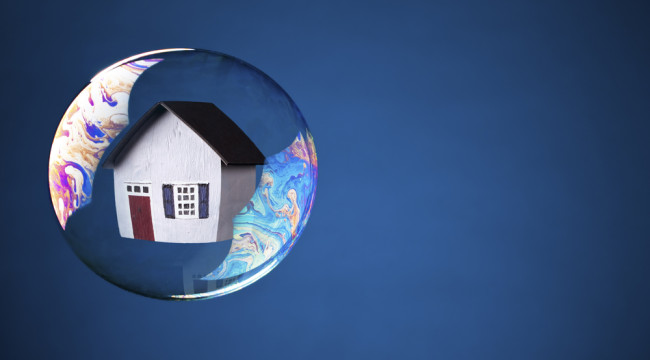 Is the Housing Bubble 2.0 About to Encounter a Pin?

Eventually, prices rise to a level that is unaffordable to the majority of potential buyers, with demand coming only from the wealthy. That’s the story of housing in New York City, the San Francisco Bay Area and other desirable locales that are currently magnets for global capital.

In the normal cycle of supply and demand, new more affordable housing would be built, and prices would decline.

With limited land in desirable urban zones and high development fees, it’s not possible to build affordable housing unless the government subsidizes the costs.

Meanwhile, the supply of existing homes for sale is limited by the owners’ recognition that they won’t be able to replace their own home as prices soar; it makes financial sense to stay put rather than sell and try to move up.

Some homeowners are cashing in their high-priced homes and retiring to cheaper regions. But this supply is being overwhelmed by a flood of offshore cash seeking real estate in the U.S.

This is part of the global capital flows I described in my recent analysis What Happens Next Will Be Determined By One Thing: Capital Flows. As China and the emerging market economies stagnate, capital that was invested in these markets in the boom years is moving into dollar-denominated assets such as bonds and houses.

This globalization of regional housing markets is pricing the middle class out of housing in areas that also happen to be strong job markets.

Many commentators are concerned that a nation of homeowners is being transformed into a nation of renters, as housing is snapped up by hedge funds and wealthy elites fleeing China and the emerging markets.

Let’s start with the basics of demographic demand for housing and the price of housing.

There are plenty of young people who’d like to buy a house and start a family (a.k.a.new household formation), but few have the job or income to buy a house at today’s nosebleed levels — a level just slightly less insane than the prices at the top of Housing Bubble #1: 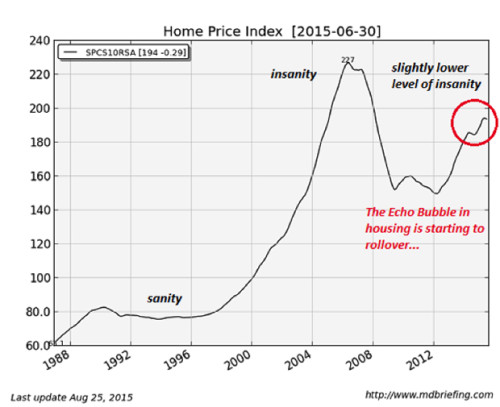 The current Housing Bubble #2 (also known as the Echo Bubble) certainly isn’t being driven by rising household income, as median household income has declined when adjusted for inflation: 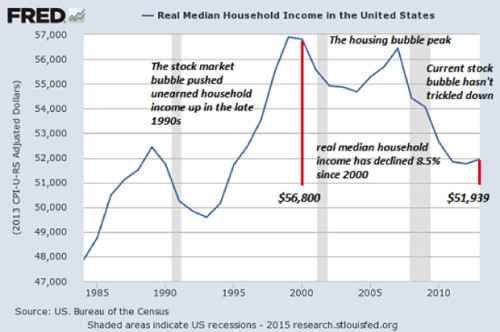 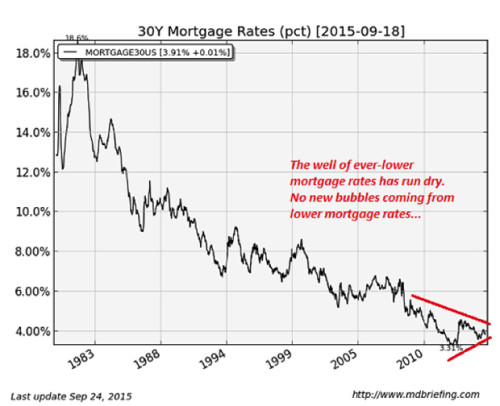 All debt, including home mortgages, is based on household income and debt levels. The higher the debt load, the more money the household must devote to debt service. That leaves less to spend on additional debt or other spending.

As this chart shows, the ratio of debt-to-earned income (wages and salaries) has declined since the speculative frenzy of Housing Bubble # 1, but it remains almost twice the levels of the pre-bubble era: 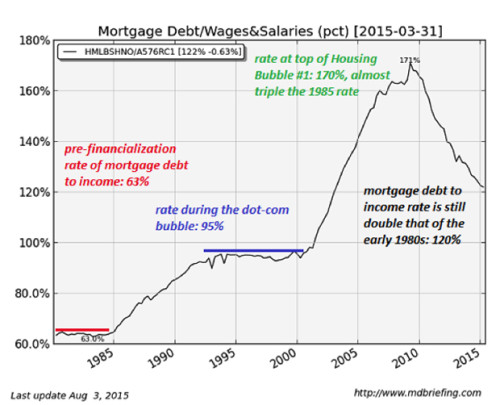 Based on the fundamentals of domestic income — debt levels and current home prices — only the top 10% of households has much hope of owning a home in globally desirable regions: 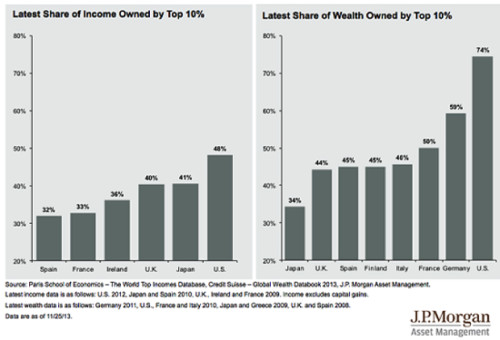 If domestic buyers can no longer afford to buy, then who’s left? Cash buyers from overseas is one answer.

Chinese millionaires buying homes for cash in the U.S. and Canada have been voting on conditions in China with their feet.  The tide of money leaving China has turned into a veritable flood, with hundreds of billions of dollars leaving China in the past year aone as economic conditions there deteriorated.

This flood tide can be seen in real estate transactions, not just in the U.S. but in Australia, Canada and the U.K.: 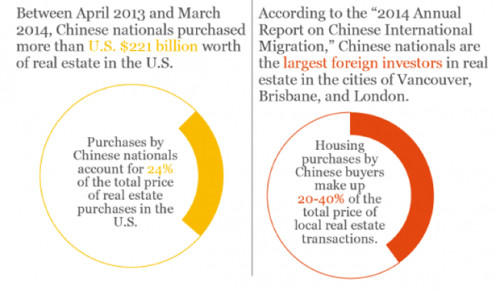 In regions that are below the radar of offshore buyers, for example, broad swaths of the Midwest, home prices remain more affordable.

But even domestic markets with relatively few foreign buyers have seen soaring home prices if there is strong job growth and limited land for new development.

These dynamics have created islands of strong job growth and global/domestic demand for housing in which only the wealthy can afford to buy and everyone else is a renter for life. These islands are surrounded by a sea of lower-cost housing in regions with weak job growth and stagnant wages.

Is this bifurcation the New Normal? Or is Housing Bubble #2 heading for the same shoals that popped housing bubble #1 in 2007-08?

Right now, the general consensus is that housing prices “will never decline” in New York City, the San Francisco Bay Area, etc.—the islands of job growth and high valuations–due to the strong U.S. economy and capital flows into USD-denominated assets. But if the bulk of this capital flow has already occurred, and capital controls and clawbacks become the order of the day, this prop under current nosebleed housing valuations might be kicked away far sooner than anticipated.

In Part 2: How A Major Housing Correction Can Happen Over The Next 1.5 Years we examine the strong argument can be made that conditions are far more fragile in this Bubble #2, as the global recession that is rapidly spreading around the globe can’t be reversed with the same bag of tricks that worked in 2008-09.I expect home valuations to fall rather quickly once capital flows out of China drop off and the recession swamps America’s economy.

History suggests that the markets that soared the most are also the ones that collapse the farthest.