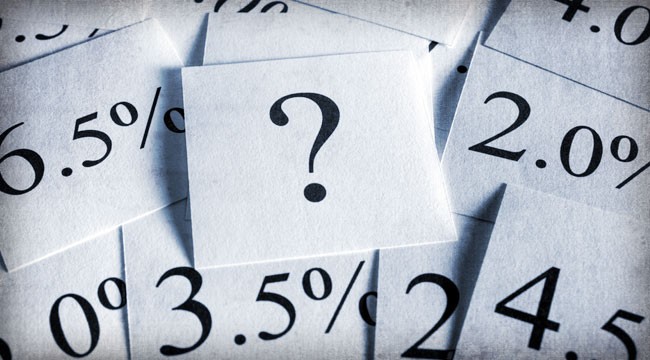 [Ed. Note: We have a longstanding tradition of editorial independence in these pages. We don’t tell editors what to think, say or recommend. Which, by its very nature, means we often disagree. That’s a good thing, because you can hear differing points of view and decide accordingly.]

[In that spirit, Zach Scheidt presents his case for a rate increase in 2015, below. If you’re vocally opinionated about the Federal Reserve… or just an income investor struggling to earn your keep, we encourage you to read on…]

There is a ton of debate as to whether the Fed will raise rates this year. Addison, Peter and Jim Rickards don’t see how the Fed could raise rates. I’m in the opposite camp.

I believe that the Fed will raise rates even though inflation levels are low right now. There is a crowd of unsatisfied savers who need interest rates to be higher so they can earn income from their money market accounts, CDs, bonds, etc.

At some point, I believe the Fed has to come around to pander to this group too.

“They’ve been punishing savers for years without a care,” countered Addison by email. “Why change now? They’re far more concerned with their dual mandate, both theoretical macro challenges, than they are with people who are actually trying to save and prepare for their own futures.”

I guess I’m not nearly as skeptical about the Fed snubbing savers. As an individual stock income analyst, it pays to be very aware of macro trends and to understand where the potential risks are. I think the Fed (and the possibility of interest rate hikes) poses a big threat to traditional income investors. I’ll explain why in a moment.

Looking at the Fed’s objectives, it is actually interesting to note that Congress has given the Fed three objectives: From the Fed’s FAQ section on its website:

The statement goes on to say that “the committee judges that inflation at the rate of 2% ( as measured by the annual change in the price index for personal consumption expenditures, or PCE) is most consistent over the longer run with the Federal Reserve’s statutory mandate,” but the statement also notes a long-run normal rate of unemployment of 5.2-5.5%.

The Fed could justify rates near zero when both their employment and stable price mandates were helped by lower rates. But now that employment is back to the normal range, can the Fed really continue? I don’t think so.

The thing that sways my opinion is the fact that several Fed members have been making comments that appear to be aimed at softening up the market to be ready for higher rates. This would fit with the Fed’s tradition of keeping surprises to a minimum and cluing in investors and economists as to what is coming up.

From The Wall Street Journal:

“‘I want June to be a viable option,’ Ms. Mester said in an interview with The Wall Street Journal.‘That is why I would like to see the language change.’”

And Richmond Fed President Jeffrey Lacker told Reuters recently that June is an “attractive option” for a rate hike.

Even if they’re both wrong, there will still be four more chances for the Fed to raise rates later this year, during their meetings on July 29, Sept. 17, Oct. 28 and Dec. 16.

The most important takeaway that I see — specifically for income investors who read my Lifetime Income Report and Income on Demand newsletters — is that there is a risk of the Fed raising interest rates this year. A material one, at that.

What happens if they do, in fact, raise rates?

Blue chip dividend stocks, like IBM and Procter & Gamble, have many of the same qualities as bonds. They have low growth expectations, investors own them for the coupon or dividend payments and they are considered safe.

This is important because this unprecedented period of low to zero interest rates has forced conservative investors to buy these dividend stocks. That’s because they haven’t been able to get any return on bonds or in their deposit accounts.

These are cautious investors. Maybe you’re one of them. Normally, they would be investing only in bonds and CDs. By nature, they’ve bought only the most stable dividend-paying blue chip stocks, like Johnson & Johnson (JNJ), Coca-Cola (KO) and Wal-Mart (WMT). The last few years have featured a “reach for yield” as these conservative investors have moved money into the stock market to try to get some income. 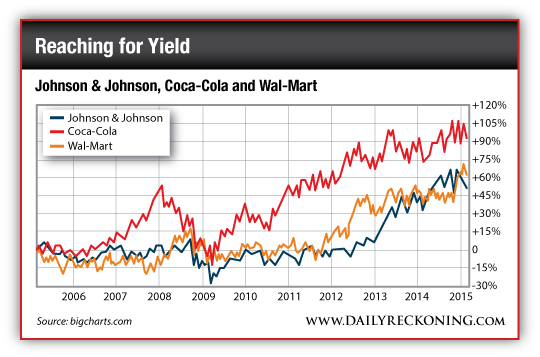 Conservative yield investors who took the risk feel like they’ve received a gift! They’re up on their position and they got yield. Why not cash out while they’re ahead?

In the next few months, as the Fed makes it more clear that they will raise rates sometime this year, these investors are going to switch tactics and move out of stocks. This could trigger a vicious cycle where skittish investors sell and blue chip stocks start to fall. In turn, that could scare other investors, causing them to sell too, and the cycle would keep repeating.

If Coca-Cola goes back to where it was trading at the end of 2007, when things were good for blue chips, it would be a 25% drop. A blue chip stock dropping 25% would scare the hell out of conservative investors.

Unfortunately, in today’s market, the biggest risks are in the stocks like Coca-Cola that most investors believe are safe. They are dead wrong!

If you’re an income investor, your best bet right now is to avoid typical “blue chip” income stocks. Instead of utilities and consumer staples, go with companies that have a growing business model and can deliver yield and capital gains outside of the interest rate cycle.

Companies like Blackstone, which is making a ton of money on the $8 billion of distressed housing it bought during the crisis. Or Corrections Corp. of America, which manages prisons across the U.S., or Healthcare Property Investors, which leases medical facilities to the thriving medical industry.

These are not stocks that were pushed higher by the reach for yield. That means they won’t be as vulnerable to “yield reach reversal,” which is quickly approaching.

Even if interest rates don’t rise, you could still see capital moving out of certain areas like utilities and consumer staples. This is because investors may see the writing on the wall and bail out of these areas in anticipation of higher rates.

And if rates do increase, it is almost certain that traditional dividend stocks like utilities and consumer staples will get pummeled.

My job as an income investor and editor of Income on Demand and Lifetime Income Report is to be a watchdog and help you steer clear of these risks. I’ve recommended income opportunities that should be well insulated from a rise in interest rates to my readers. This is because I believe that protecting your capital is your No. 1 objective as an investor. And to protect your capital, you should stay away from many of the stocks that “traditional” income investors normally gravitate toward.

Income on Demand should have a banner year as interest rates rise. As investors react to the end of zero interest rates, volatility will increase. That means more income for you if you use our safe strategy for generating it.