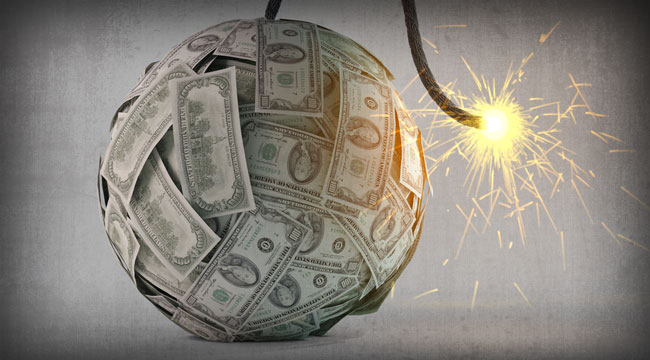 Important Lessons from the 12 Largest US Bear Markets

In the late 1990s, just ahead of the bursting of the NASDAQ bubble, I reproduced, courtesy of the late Peter Bernstein (author of Against the Gods), a table showing how many quarters of previous capital appreciation were given back in the 12 largest US bear markets since 1929.

In the meantime, we have had another three bear markets and I have updated his table to reflect the new data. (Bernstein used Dow Jones data, and I used S&P 500 data for the period since 1998.) 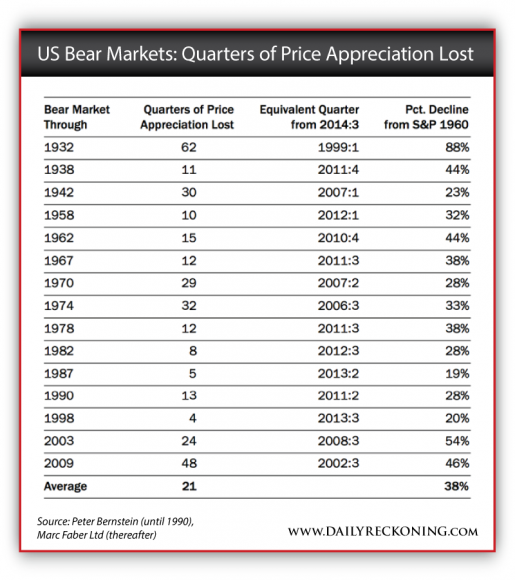 As can be seen in the table , on average, bear markets gave back 21 quarters, or a little more than five years, of previous capital gains, while the worst bear market (1929-1932) gave back over 15 years of previous gains.

The second-worst bear market was the slump ending in March 2009, which gave back 12 years (48 quarters) of previous gains. I have now calculated by how many years of previous capital gains, and by how much the market would decline from the current level, were it to lose the same number of “quarters of price appreciation lost” as in each of the previous bear markets. In other words, and to make it simple:

Assuming the S&P 500 were to peak out now and lose the smallest number of previous “quarters of price appreciation lost” (four quarters in the bear market ending in 1998), it would drop to the level in the third quarter of 2013 (down 20%).

Conversely, if the S&P index dropped from the current level by the average of quarters of price appreciation lost over the last 85 years (a little more than five years — or, to be precise, by 21 quarters), it would decline to the level it stood at in the second quarter of 2009. (In such a case, the index would drop by 52%.)

But this is not so relevant, since everyone seems to be convinced that the US stock market will keep on rising. Therefore, let us also be bullish and assume that the S&P 500 will soar by 30% to 2,570 within a year and then retreat by 21 quarters of previous price gains (the average number of quarters of price appreciation lost since the bear market of 1929-1932).

When the world is mad, we need to be a little mad as well. So, let us all become academics and live in a glass palace in LaLa Land and let us be just as optimistic as Mrs. Yellen and adhere like the Fed to George Orwell’s principle that “political speech and writing are largely the defense of the indefensible…. Thus political language consists largely of euphemism.”

And since we all also want to make the world a better place, we should assume that the S&P 500 will double from its current level to almost 4,000 over the next five years. If the S&P 500 were subsequently to decline by 21 quarters of previous price gains, we would be precisely a little lower than today’s level. (Remember, the 21 quarters would be the average of quarters of price appreciation lost over the last 85 years.)

I further need to point out that the stock market has become rather selective and that numerous “popular” stocks are already down meaningfully from their 12-month highs. My friend Christopher Hayes has compiled a table showing some of the carnage that has already occurred. 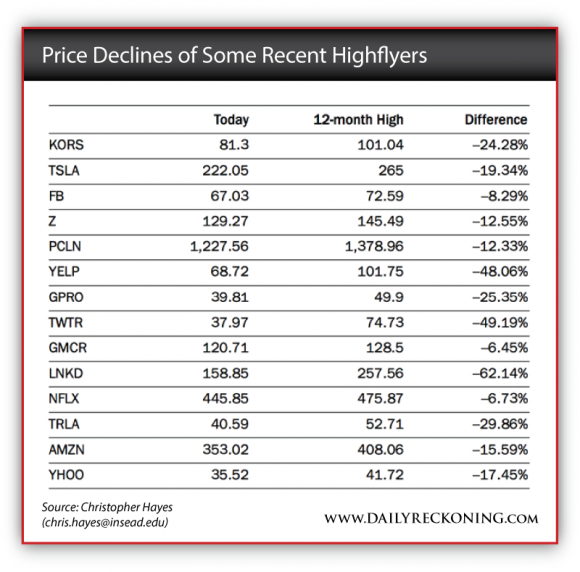 So, whichever way I slice it, I believe that the risks of buying US stocks outweigh the potential of future returns. While it is correct that stocks may move higher, that doesn’t imply that they are attractive.

Moreover, propelling stocks to around 4,000 for the S&P 500 would not require “a high degree of monetary policy accommodation” (Yellen), but rather a huge increase in the rate of asset purchases. Under this scenario, it is likely that the US dollar would collapse (as well as the US dollar bond market), creating a global systemic crisis from which the price of precious metals would benefit.

I say this because a sharply declining dollar would force other central bankers around the world also to print massive amounts of money in order for their economies to stay competitive. Consequently, the only “cash” that would still have the quality of being a “store of value” would be precious metals.

Ed. Note: Dr. Faber himself is still accumulating gold at the current price of $1,285. If you’d like to do the same, we highly recommend you first read The 5 Best Ways to Invest in Gold – a free report that you can access by signing up for the FREE Daily Reckoning email edition. In addition, by signing up you’ll gain access to all of the free reports available in the Daily Reckoning research library. Don’t miss out on your chance to discover some of the world’s most lucrative investment opportunities. Click here to sign up for The Daily Reckoning, for FREE, right now.