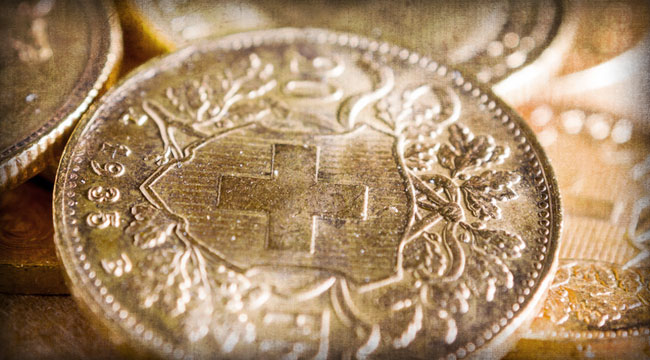 The Most Important Factor of the Swiss Gold Initiative

[Ed. Note: Over a month ago, in our email edition, we tipped you off to the upcoming Swiss Gold Referendum — one of the events our own Jim Rickards believes could trigger a monetary collapse. Yesterday, we continued that discussion with the first part of an eye-opening piece by Grant Williams, aptly titled “Why You NEED to Pay Attention to the Swiss Gold Initiative.” Today, we bring you part two, which explains, in detail, exactly how the Nov. 30 referendum could shape the future of the gold market.]

Luzi Stamm —  the Swiss politician spearheading the popular Swiss Gold Initiative — pulled off a masterstroke in securing the involvement of Egon von Greyerz who, along with being one of the most highly respected figures in the gold industry, happens to be one of the world’s nicest human beings.

We’ll get to Egon’s involvement shortly, but first let’s take a look at the motions that make up the Swiss Gold Initiative, which are threefold: 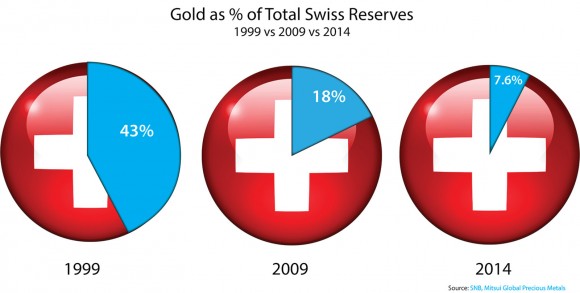 Addressing the motions in order, let’s begin with number 1, that all Swiss gold be physically stored in Switzerland.

Switzerland has made its name over centuries as being one of the safest places on the planet to store gold. That reputation has been good enough to convince people from all over the world to entrust their gold to the Swiss for safe-keeping. However, like many other central banks, the SNB stores a certain proportion of its gold overseas. How much? We don’t know. Where exactly is it held? We have no idea (other than “in the UK & Canada”). In fact, when the finance minister was asked, in parliament, where Switzerland’s gold was stored, his answer was something of a head scratcher:

Riiiight… Call me old-fashioned, but if I were a Swiss national I’d want a better answer than that.

Anyway, the reason commonly given by central bankers for storing gold in places like London or New York is to have it “close to the marketplace should sales be necessary.” Obviously, if the Swiss are forbidden from selling their gold and are bound to hold a minimum of 20% of their gold reserves in gold, that argument becomes moot anyway, so shipping it home should be nice and straightforward. Just find out where “in the UK and Canada” it is (I’m sure they gave you a receipt), call them up, and tell them you’d like it back. Now that you’ve sold more than 50% of the gold, it shouldn’t take too long to physically move the rest home. Surely?

Number 2 on the initiative’s wishlist is that the SNB be prohibited from selling their gold reserves. Now, THAT might be a problem for the SNB in times to come in the “ordinary conduct of monetary policy,” but as we are some ways away from a world in which “ordinary” features in any way, shape, or form where monetary policy is concerned, I don’t think this prohibition is going to matter much. However, if you think this initiative isn’t being taken seriously, you just have to look at an excerpt from a speech given by the governor of the SNB, Thomas Jordan, a matter of days after the Swiss Gold Initiative achieved the 100,000 signatures it required to qualify as a referendum.

If you lean in real close, you can smell the fear:

(Thomas Jordan, speech to general meeting of shareholders of the Swiss National Bank, 26 April 2013): The SNB does not generally comment on any political initiatives. However, the gold initiative has a very direct impact on the SNB’s capacity to act. This is why we are taking the opportunity today to present our viewpoint for the first time on the demands of the initiative.

The initiators see a high level of gold reserves as a guarantee for currency stability. They fear that the Swiss franc will decline in value and that price stability will be threatened if a large proportion of the balance sheet does not consist of gold holdings. They are also concerned that the SNB’s gold reserves held abroad are not secure and will not be accessible in critical situations.

We share the objectives the initiators put forward, such as maintaining currency and price stability and ensuring both the SNB’s capacity to act and its independence. However, the measures proposed to this effect are not suitable; in fact, they are even counterproductive. Instead, they are based on misunderstandings about the importance of gold in monetary policy and would compromise the SNB’s capacity to act in pursuing its monetary policy, which would run counter to the objectives envisaged. In other words, these measures would, in certain situations, considerably hinder the SNB in fulfilling its monetary policy mandate and be detrimental to Switzerland. We therefore consider it our duty to point out the serious disadvantages of the initiative already at an early stage.

Thomas, if I may?

The SNB’s desire to “maintain currency and price stability” can be summed up by this chart, which will be all too familiar to those who have studied the fiat currencies of the world, but it obviously needs trotting out one more time: 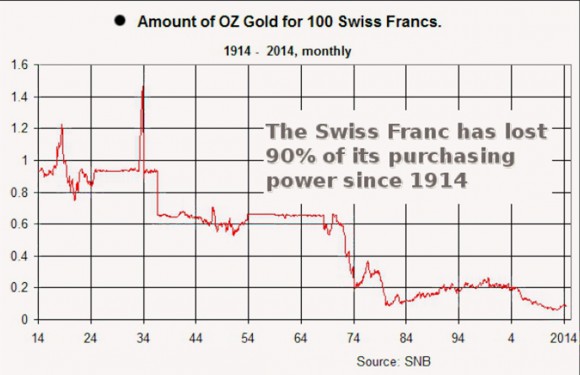 As for the SNB’s capacity to act in “pursuing monetary policy,” what the Gold Initiative will do is effectively stop them from printing unlimited amounts of Swiss francs in order to keep the once-mighty Swiss franc pegged to a potentially obsolete currency like the euro.

Now, I am simplifying here in the interest of expediency, and I am well aware of the restrictions that any kind of gold standard places on a central bank’s operational capability, but it’s important to understand that the Swiss franc functioned perfectly well as a partially gold-backed currency up until 1999, and the desire of the SNB to have more flexibility in their monetary policy comes down to their wanting to employ the same tactics being resorted to by the world’s other major central banks.

All of which leads us to perhaps the most fascinating part of the Swiss Gold Initiative: the motion to ensure that the SNB immediately acquires enough gold to back 20% of its reserves (a threshold which it must then maintain as a minimum — at a level, you know, about where they were in 2009).

Now, the numbers around this little piece of the puzzle are interesting.

In order to reach the 20% threshold, the SNB has two options open to them: they can either reduce the size of their balance sheet or buy gold.

In life, there are many limbs out onto which one should never venture, but I’m prepared to dance out onto this one like Billy Elliot:

The SNB will NOT reduce the size of their balance sheet in order to meet the 20% mandate should the motion be passed.

There. Quote me on that.

And we all know what THAT leaves, don’t we boys and girls?

Yes, in order to meet the regulations should the Gold Initiative pass, the SNB will need to buy 1,700 tons of gold at the market (assuming, of course, that they don’t expand their balance sheet further in the meantime — something that, with the increasingly weak euro, is doubtful in the extreme). That equates to roughly $70 billion or CHF 67 billion.

And we are talking physical gold. Not futures contracts or complex derivatives but the metal itself.

Put another way, 1,700 tons of gold is roughly 70% of total annual gold production. 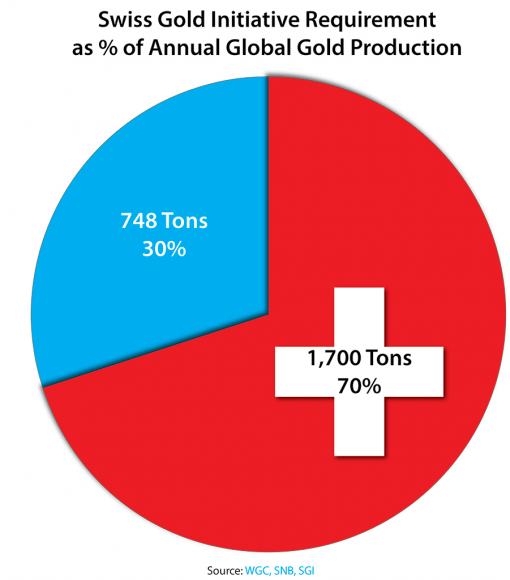 Now, the SNB will have five years in which to reach the required 20% limit, but they will essentially need to get started immediately, because with the floor such a big buyer will put under the price and the constant expansion of their balance sheet due to that pesky euro peg, the longer they wait, the more gold they will have to buy and the less they will get for their money.

How’s your attention? Grabbed yet?

More on this tomorrow…

Grant Williams
for The Daily Reckoning

Ed. Note: With the vote on the Swiss Gold Initiative officially one month away, you’re likely to see more and more news sources start to pick up the story. Of course, it’s been a regular topic in our Daily Reckoning e-letter for over a month now, and we’ll continue that conversation as Nov. 30 draws closer. Stay ahead of the curve on this and other important financial events. Click here now to get The Daily Reckoning sent straight to your email inbox, every single day. It only takes a few seconds, and it’s completely FREE to sign up. Click here now to get started.

Click here to continue reading this article from Things That Make You Go Hmmm… – a free newsletter by Grant Williams, a highly respected financial expert and current portfolio and strategy advisor at Vulpes Investment Management in Singapore.

Swiss Gold Update: What a "Yes" Vote on Nov. 30 Means for Gold Investors

With the Swiss gold referendum set to be voted on just five days from now, Jim Rickards explains in detail exactly what a “yes” vote would mean to the overall gold market, and how it will impact the price of the yellow metal. Gold investors will want to pay close attention. Read on…

Grant Williams is the chief investment strategist for Mauldin Economics’ premium publication, Bull’s Eye Investor, as well as the author of the popular free investment letter, Things That Make You Go Hmmm… Williams also acts as the portfolio and strategy advisor for Vulpes Investment Management in Singapore − a hedge fund running $250 million of largely partners’ capital across multiple strategies. Grant has 26 years of experience in finance in Asian, Australian, European, and US markets and has held senior positions at several international investment houses.