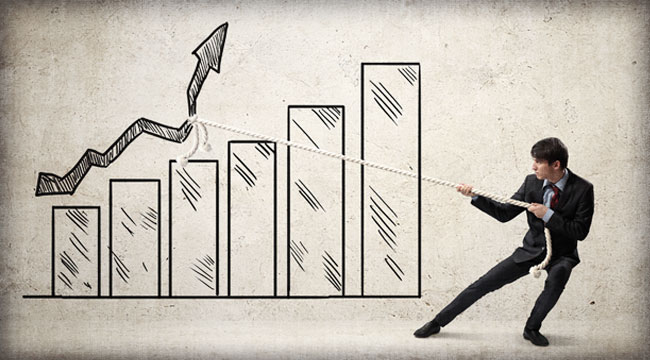 How to Invest in a Strong Dollar World

“We continue to believe that we are moving into a ‘strong U.S. dollar world,’” Louis-Vincent Gave, the investment strategist, wrote in a recent note to his investors. “This makes for a very different set of winners and losers, and very different portfolios, than what most investors have been used to over the past decade or so.”

I think there is a good case for a strong U.S. dollar for the rest of this year and into next. We’ll look into the argument here and what its chief effect is likely to be.

Gave’s comments inspired me to set down my own. In his note, Gave shared the chart below. It shows the dollar index since circa 1985. The dollar index measures the value of the dollar against a basket of foreign currencies. The euro makes up more than half the index (and European currencies did before the creation of the euro). The yen, pound and Canadian dollar fill out the bulk of the rest of the basket.

I share the chart because I think the pattern shown might surprise you. After all, didn’t the U.S. government run widening deficits after the crisis? Didn’t the central bank engage in “money printing”? And wouldn’t you expect these would drive the dollar lower?

You might’ve. Plenty of people did. And they were (and are still) wrong. “As things stand,” Gave wrote, “we are basically trading roughly at the same levels that have prevailed for most of the post-2008 crisis period.”

I think there is a good case for a strong U.S. dollar for the rest of this year and into next.

In fact, the U.S. dollar index recently put in an 11-month high. There are a few reasons I’d point to for that strength against foreign currencies to continue.

First, the U.S. trade deficit continues to shrink. According to the latest readings in June, the deficit shrank by 7%. When the trade deficit shrinks, that means fewer net dollars flow overseas. Hold that thought.

Second, the federal deficit is also shrinking. For the fiscal year ending September 2014, the deficit will be around $500 billion. That’s less than one-third of what it was in 2009 — the recent peak. Lower deficits means fewer dollars injected into the system.

Now put the two together. You know basic economics. What happens when the supply of something gets tighter? Its value rises, assuming demand stays the same.

Aye, what about dollar demand? There is steady demand for U.S. dollars from abroad, because it is the world’s reserve currency. Meaning just about everyone uses it to settle up international trade.

As Gave writes in his book, Too Different for Comfort, it’s not easy to unseat a reserve currency. After running through some history, Gave concludes:

A reserve currency is thus a bit like a computer operating system — it pays to use the one that everyone else is using, and the more people use one system, the less incentive there is to switch. Once a reserve currency gets entrenched, therefore, it is exceedingly difficult to dislodge, because the benefits of the new currency have to outweigh those of the old one, not by a little, but by a lot.

Of course, the dollar’s standing won’t last forever. But I think we can safely say the U.S. will remain the standard for years yet. There is simply no competitor on the near horizon. Not even one that’s close. True, a variety of emerging markets and other countries have learned to use other currencies to settle transactions. That’s just good sense. They’ve been caught short of dollars before and had to endure a crisis of some sort as a result. But these transactions are small in the scheme of things.

Meanwhile, those foreign markets are growing and the demand for dollars ought to remain at least stable. Thus, the dollar index is putting in that 11-month high.

Part of the U.S. dollar strength also comes from the fact that there are lots of attractive assets in the U.S. that foreigners like to buy and own. They have to pay for them in dollars. Gave makes this point in his book, too. When the U.S. dollar gets cheap, Brazilians rush in to buy condos in Miami. Canadians pick up second properties in Arizona. Russians buy New York condos. Foreign pension funds buy up U.S. debt, stocks and real estate.

And whenever there is a crisis, what do people do? They go to cash, and that means U.S. dollars. They buy U.S. T-bills. When the you-know-what hits the fan, it is still the dollar they retreat to. They’re not buying Chinese yuan. Gold is another asset seen as a safe haven, but the gold market is tiny and off the radar of the big pools of money out there. When a big fund wants safety, it turns to cash — U.S. dollars.

So let’s say the dollar stays strong. What effect could it have?

It could drive U.S. interest rates even lower. If you look at the 10-year securities of the big EU countries, Japan, Canada and other developed nations, you find that interest rates are all lower than in the U.S. But as Gave asks, “Why own 10-year bonds yielding 1%, or Japanese government bonds yielding 0.5% in falling currencies, when you can own 10-year U.S. Treasuries denominated in a rising dollar yielding 2.5%?”

This is the question the market will be asking itself soon, especially as/if that dollar index continues to make highs. Then you can expect to see U.S. Treasury yields falling to levels where these other developed markets already sit.

All is to say that if you are looking to get out of the U.S. dollar, cool your jets. As long as the trends above are in place, the dollar index might be on the verge of a bigger rally.

P.S.: We’ve been covering the fate of the dollar, inflation’s impact on the market and nation’s “race to the bottom” in our email editions of the Daily Reckoning. If you’re not signed up to receive it, you’re missing out on crucial context that sets the stage for essays like the one you just read. Sign up to receive our email episodes for FREE, right here, and you’ll get the best (and most snarky) economic and financial analysis on the internet.