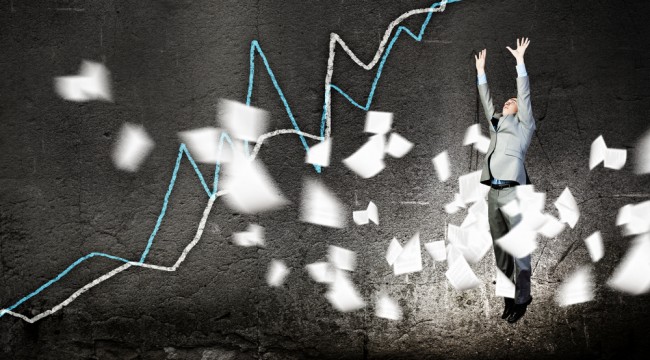 How to Grab Profits that are Just Out of Reach

When Michael Lewis’ new book Flash Boys came out, the author caused a stir while making the media rounds to promote it. “The stock market is rigged,” he told 60 Minutes flatly. His comments set off a firestorm of debate as to whether sharp techies and their fast computers are screwing small investors.

As titillating as that sound bite was, those who take aim at high-frequency trading (HFT) need to reconsider their targets. The computers of HFT firms jump ahead of investors buying stock, purchasing shares from the seller and in turn selling to the buyer, making a few pennies of profit in between. Technology makes this all possible with computers making decisions in nanoseconds.

This trading system has created an opportunity for enterprising entrepreneurs to make a buck and, some would say, make the market more efficient. Others see it differently. “If you can see trades a little before someone else,” Floyd Norris writes for The New York Times, “then it may be possible to profit from that knowledge. To Mr. Lewis, and to some of the heroes in his book, the technology should be used to help bring real investors together to trade with one another.”

Matthew Phillips at Bloomberg Businessweek takes the opposite view. Speed traders and retail investors are not playing the same game, he writes. High-frequency traders are competing against each other to fill retail investors’ orders.

…it is financially fatal to leave one’s money in cash as government continually erodes its purchasing power.

“The majority of retail orders never see the light of a public exchange,” writes Phillips. Large wholesale firms compete to fill these orders. “These firms’ algorithms compete with each other to capture those orders and match them internally. That way, they don’t have to pay fees for sending them to one of the public exchanges, which in turn saves money for the retail investor.”

HFT has created an arms race of sorts. One story Lewis’ book revolves around is a $300 million construction project to lay a more direct cable between the futures exchanges in Chicago and the stock market computers in New Jersey. The line shaved critical milliseconds off the time it takes to send information.

Ex-Wall Street economist Robert J. Barbera believes, “Economically, that has to be a dead-weight loss.” He’d rather they built another lane on the George Washington Bridge.

Norris is also skeptical of the investment. “It is hard to see the benefit to society as a whole of enabling such trades.”

However, Gus Sauter, who was the CIO at low-fee Vanguard for many years, said speed traders helped him save his mutual fund clients (retail investors) more than a $1 billion a year. By that comparison, the Chicago-New Jersey cable looks downright cheap.

The cultural effects of inflation create this HFT debate in the first place, because it is financially fatal to leave one’s money in cash as government continually erodes its purchasing power. As Jörg Guido Hülsmann writes in The Ethics of Money Production, inflation deprives people “of the possibility of holding their savings in cash.” Professor Hülsmann explains that the elderly, widows, and orphans “must invest their money into the financial markets, lest its purchasing power evaporate under their noses.”

With a sound currency, a person could put a few bucks away in a savings account each month, confident its purchasing power would keep pace and the interest earned provide an adequate nest egg, all the time being blissfully unaware of what was happening on Wall Street. But in the modern world, Hülsmann writes, people “become dependent on intermediaries and on the vagaries of stock and bond pricing.”

This is great for Wall Street players and bad for everyone else.

The Fed’s inflation provides near-term arbitrageurs opportunities to make money while share prices fall on a real basis. Hans Sennholz explained in his 1979 book Age of Inflation, “But alert traders can profit from the many chills and fevers that attack the market.”

Sennholz foresaw this new investing class of 1%-ers all those years ago, when he wrote, “A small new middle class of traders and speculators replaces the old middle class of investors, and huge new fortunes are created from the losses suffered by investors and capitalists.”

Everyday middle-class investors look with envy at the wealth they see generated on Wall Street and seek to emulate it. Instead of spending time on more important things, “Inflation forces them to spend much more time thinking about their money than they otherwise would,” writes Hülsmann.

Think of all the time spent perusing financial publications and watching TV networks devoted solely to investments. People must invest right in hopes of accumulating wealth for emergencies and retirement. Inflation “compels them to be ever watchful and concerned about their money for the rest of their lives,” explains Hülsmann. “They need to follow the financial news and monitor the price quotations on the financial markets.”

In the end, the controversy surrounding high-frequency trading is likely much ado about nothing. For one thing, the industry peaked five years ago, pulling in $5 billion in profits. In 2012, it pulled in $1 billion. That might sound like a lot, but JPMorgan Chase made $5 billion just last quarter. As far as influencing markets and costing the average person money, HFT doesn’t compare to the Fed’s quantitative easing and zero interest rate policy. But in this age of inflation, “Money and financial questions come to play an exaggerated role in the life of man,” Hülsmann warns.

A more sound currency, whether metallic or digital, would spread a healthier culture, one not so obsessed with speculation, wealth, material goods, and nanoseconds.

Ed. Note: Readers of the FREE Laissez Faire Today email edition received an exclusive offer to get a copy of Flash Boys for a steep discount – along with several other offers to discover some of the best investment opportunities on the market. Don’t miss your chance to get all of these great offers, completely free of charge. Click here and sign up for Laissez Faire Today before you do anything else today.