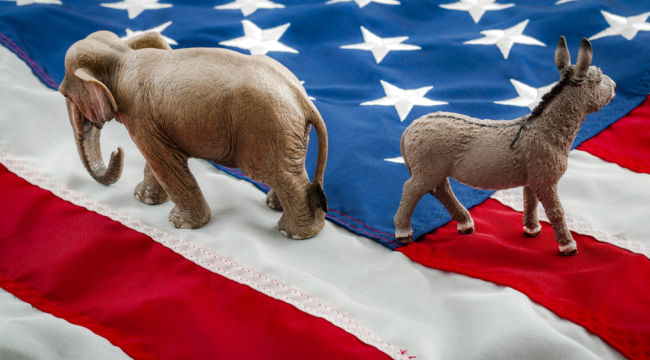 The American people executed their civic responsibilities yesterday… and the latest “most important elections ever” have been decided.

The long-anticipated “blue wave” broke upon a red reef… and lost its oomph.

Democrats seized command of the House. Requiring 23 seats, they collared at least 26… and may extend their lead once all votes are tallied.

But the Republicans held the Senate — and expanded their majority to perhaps 54 seats.

Our beat is money, markets and politics… and how they all tuck together.

So the all-important question becomes:

What can you expect now?

For the official answer we turn to Marko Kolanovic, head quant at JPMorgan.

He believes a divided Congress “is the best outcome for U.S. and global equity markets.”

No blue wave means no impeachment… and no repeal of tax reform.

And a split Congress may also force Trump off the trade war:

As the president cannot count on Congress or the Fed for more easing, he will need to do what is in his power to keep the economy rolling — drop the damaging trade war and turn it into a winning deal… Split Congresses have historically been positive for the market, and this time it reduces the probability of the most negative trade war outcomes.

But what can you expect on the political front?

As far as we can make out:

But with the Senate squarely in the Republican grip, all impeachment fireworks will be for show — gaudy but harmless.

Even if impeached, a conviction in the Senate stands the snowball’s chance.

But you can also expect no new legislation… no additional tax cuts… not much of anything.

In one word, you can expect gridlock.

But is gridlock the great bugbear as commonly depicted?

The word conjures the image of a hopeless traffic snarl… or a stalemated battlefront.

But in our estimate gridlock has been libeled with an undeserved reputation.

Its good name has been blackened by rascals, often well-intentioned rascals, always in a hurry to get something done.

But they usually end up vandalizing the Constitution, ransacking the Treasury and disturbing the peace.

“That government is best that governs least,” as Jefferson may have never said.

That is why the nation’s founders were heart and soul for what we moderns call gridlock.

They knew their history.

Which is why they designed a government machinery so hopelessly botched, a preposterous contraption so at odds with itself… it could hardly get anything done.

One lever puts the thing in motion…

A mechanical conspiracy instantly forms against it… and another lever throws it into reverse.

A crank turns one way, which is immediately undone by another crank turning the other way.

The result is a government machine perpetually checked and balanced by its own warring parts.

As Mr. James Madison — father of the Constitution — styled it:

“Ambition must be made to counteract ambition.”

When the machinery functions at all, it is designed to go at a crawl.

So go ahead and put us down for gridlock — in theory.

We’re against gridlock when it blocks the dynamiting of useless laws, regulations, departments, bureaucracies, taxes and fees.

That is, we’re against gridlock when it keeps the government on our back… and in our pocket.

That is, we’re against gridlock much of the time — because it usually keeps the invasion going.

But put gridlock to one side for the moment.

Perhaps the unspoken message of last night’s elections is this:

The status quo remains high in the saddle.

Is there a single electee who inspires confidence to the contrary?

Not that we can discern.

All with their buckets in the stream, all siphoning the system dry.

And the “Deep State” — the unelected permanent government yanking the puppet strings — runs as deep as ever.

We introduced best-selling author Rich Dad Poor Dad Robert Kiyosaki over the summer. We reintroduce him today and for good reason (see the Editor’s note).