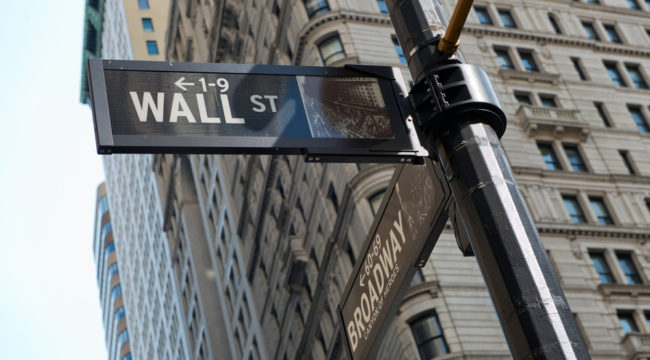 Greedy When Others Are Fearful

The lion has lost its roar.

Stocks have officially suffered a “correction.”

After yesterday’s soaking, both the Dow Jones and S&P fell 10% from their recent highs.

And like a moony love affair gone suddenly wrong… last month’s euphoria has succumbed to this week’s disillusionment.

This week’s events have left many investors disillusioned…

Vanished is the illusion that volatility has been conquered.

Vanished is the illusion that “buying the dips” is an infallibly grand strategy.

Vanished, indeed, is the illusion that this time is different — until next time at least.

Bank of America Merrill Lynch (BofAML) reported two weeks ago that investor money had flooded into stocks at a record clip.

The fools rushed in with $33 billion.

No coincidence — it would seem — that the S&P attained record heights that day.

It was also the day BofAML’s “Bull & Bear Indicator” flashed bright, blinking red — no coincidence either, we should think.

Get out while the getting is good, it said, taking a leaf from Mr. Warren Buffett:

Here is the prophetic “Bull & Bear Indicator” from Jan. 26: 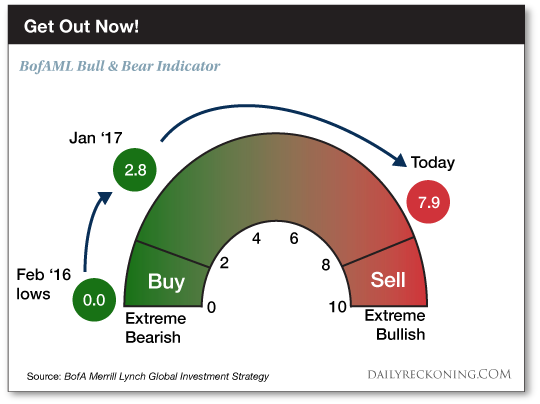 This Bull & Bear Indicator had given 11 sell signals since 2002.

How often has it been right?

Based on their indicator, BofAML predicted a 12% sell-off within the next three months.

But let us return to the second part of Mr. Buffett’s famous advice on greed and fear — being greedy when others are fearful…

As sure as the rising and falling tide, the fools that rushed in two weeks ago… have rushed back out.

The record inflow into stocks has been replaced by a record outflow away from stocks.

In the week of Feb. 7, 2018… equity funds lost $30.6 billion to outflows. This was the largest outflow on record from equity funds, which just had their record-high inflow of $33.2 billion only two weeks ago.

If you seek a lesson in the psychology of crowds… then look no further.

And so “a full-on bear market is now in the hands of just two players,” according to Zero Hedge:

“In other words,” they continue, “if hedge and mutual funds don’t step up, and if companies don’t unleash a buyback tsunami, it’s about to turn very ugly.”

Did hedge and mutual funds “step up” today?

The Dow opened up some 200 points higher… but couldn’t maintain the pressure in the gauges.

It slipped back into red mid-morning.

But fortunes shifted late in the day, and it closed the day up 330 points.

The S&P and Nasdaq followed the same pattern. And both ended the day on positive notes.

Is the worst over?

Maybe the market was just spoiling for a technical knockout this week… and used any excuse to take an eight-count.

Some time on the canvas might give it a much-needed rest.

Maybe this correction will soon pass and quickly undo whatever hell it’s raised.

Is it time to get greedy again?

Not quite yet, if the folks at Bespoke Investment Group are to be credited.

Under their microscope, they put the 95 corrections the S&P has suffered since 1928.

Their research reveals the median correction for the S&P is 16.4%.

And the median pullback lasts 64 days.

If the S&P sticks to script, the current correction would take it to 2,400 — roughly 8% lower — over a good two months.

Of course, they speak of medians.

“Unfortunately,” says Bespoke, “there is no hard and fast rule when it comes to corrections, and that’s what can make them so terrifying when you go through one. You never know when it will end.”

That’s just it, isn’t it — you never know when it will end.

We find ourselves in an alley truly blind.

But if you really want to put Mr. Buffett’s famous aphorism to the test… this could be just the time to get greedy again.