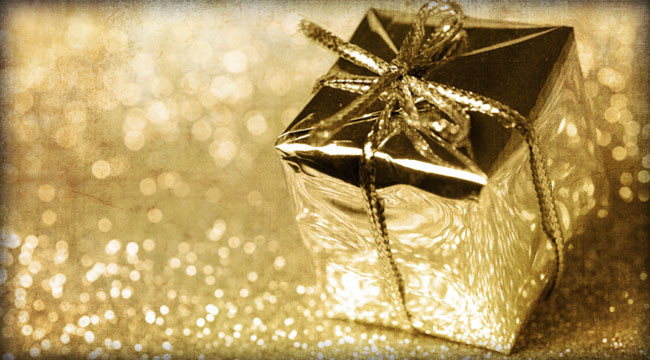 Gold's Gift on the Eve of Zero Hour

[This article originally appeared in The Daily Reckoning on October 29, 2013]

While the price of gold has been range-bound between $1,290–1,420 since late July, we remain on watch for evidence of what we’ve labeled “Zero Hour.” That’s the moment when a major commodities exchange runs out of gold to settle a contract and settles in cash instead — a default. At that moment, the price of physical gold in your hand runs away from “paper gold.”

As we go to press, signs of stress are in the system — especially in GLD, the giant ETF that’s a proxy for the price of gold. We’ve never much liked GLD. It has too much “counterparty risk” — the risk that whomever you’re doing business with won’t, or can’t, live up to their promises.

Among those promises is that heavy-duty moneybags investors can exchange their GLD shares for actual metal — an option not available to you, the retail investor. But now even the big boys can’t trade in their shares for the real thing. “People have tried to get their gold out of that ETF,” says John Hathaway, manager of the Tocqueville Gold Fund, “and you just can’t get it.”

Hathaway’s account is confirmed by Grant Williams, a Singapore-based hedge fund adviser. The problem? The massive imbalance between futures contracts on the New York Comex and the actual metal inventory the Comex has on hand for delivery. Williams reckons there are 55 ounces of “paper gold” for every ounce of the real thing.

“We’ve seen the gold being drained out of the Comex almost nonstop this year,” Williams recently told radio host Eric King, “certainly since the Bundesbank repatriation request. It hasn’t had any noticeable effect just yet, but it really is a spring that is continually being coiled, and at some point it is going to snap back. And when it does, with all of these disparate claims on each ounce of gold, there is going to be some fireworks, no doubt about it.”

From the start of 2013 through mid-September, Comex gold inventories plunged 36% — from 11.059 million ounces to 7.034 million. This is the West-to-East flow of gold we’ve been documenting all year in the daily 5 Min. Forecast. The gold being drained from the vaults in New York has moved to China, where both the central bank and ordinary people are loading up at prices last seen in 2010. 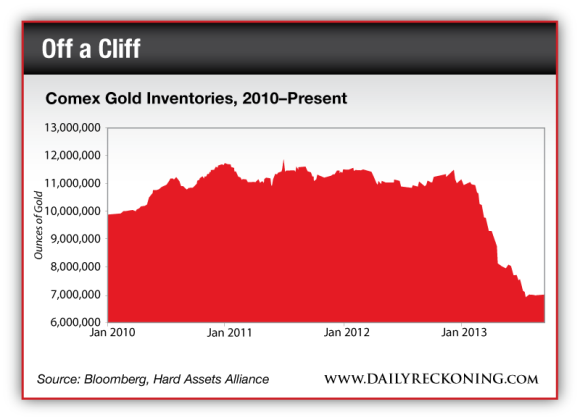 The drop in Comex inventory “is worth $9.66 billion at today’s prices,” writes Mark O’Byrne of the Irish gold dealer GoldCore, “meaning that a handful of billionaires or just one powerful creditor nation-state with large foreign exchange reserves, such as Russia, could corner the Comex gold market and cause a default.”

Here’s another wrinkle uncovered by the aforementioned Grant Williams. Nearby is a chart of the gold price going back three years — annotated with two specific dates.

The first one was when Venezuela’s late caudillo Hugo Chavez demanded the repatriation of 160 metric tons of gold held abroad, mostly at the Bank of England. The second was when Germany’s central bank asked for the return of 674 tons of gold from the New York Fed and the Banque de France — for which the Germans were told they’d have to wait seven years. 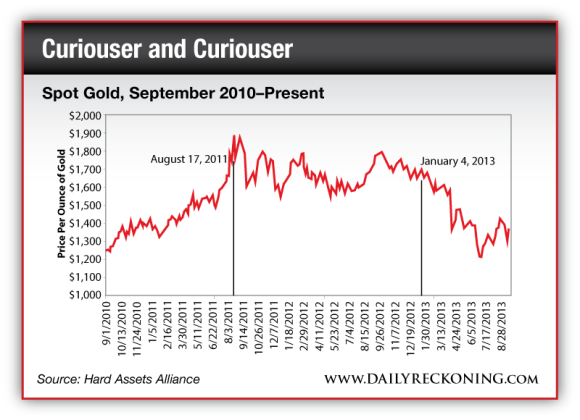 In both cases, “an initial move higher quickly morphed into a concerted move lower” in the gold price, writes Williams. And because Germany was asking for more than four times as much bullion as Venezuela, the move down was that much greater.

What gives? Williams is in agreement with Eric Sprott, the Canadian fund manager who helped us develop the Zero Hour scenario last February. The Western central banks have leased their gold to large commercial banks at interest rates of less than 1%, and the commercial banks have sold that gold (mostly to China), plowing the proceeds into assets earning more than 1%.

“I think the central banks have been leasing their gold out for decades to the bullion banks,” Mr. Williams writes in his free newsletter Things That Make You Go Hmmm… “and now find themselves in the rather precarious position of needing to reclaim that which they are supposed to own before the shortfall is exposed.”

The smash in the paper gold price “was specifically designed to shake out loose holders,” Williams goes on, “and it has worked to a degree, but only amongst the weaker holders of the ETFs, who tend to ‘rent’ gold rather than own it.

“I think the stronger hands have been getting their gold out of the official warehouses as fast as they can; and central banks in places like China, Russia and all over the rest of Asia and South America have been trying to buy and, crucially, to take delivery of physical gold while they still can.”

“It’s always been my contention that the demand for gold is well in excess of mine supply, that the Western central banks continue to supply that gold.

“I think the decline in gold was engineered here to try to spring some physical gold out of the market, which the GLD and other ETFs responded to in huge proportion. There was a dump of about 700 tons of physical gold in a six-month period. Well, that’s almost 1,400 tons a year, annualized. That’s about two-thirds of the mine production ex China, ex Russia that hit the market on an annualized basis, and yet was consumed, I might point out.”

Ed. Note: In today’s Daily Reckoning email edition, Addison revealed his two favorite ways to buy and hold real physical gold… and offered readers a rare chance to get in on one of them right away. Offers like this are packed in every single issue of The Daily Reckoning email edition. If you’re not getting it, you’re missing out. It’s completely free to sign up, it comes with no obligation and it takes about 30 seconds. So if you’ve got half a minute to spare, you might want to use it to sign up for FREE, right here.