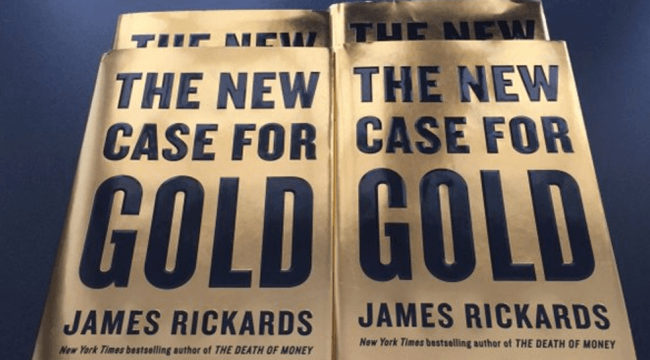 Thank you to George Melloan for his thoughtful review of my new book in today’s Wall Street Journal. Read on…

Gold bullion’s dollar price soared 20% from mid-December 2015 to mid-March of this
year on the London bullion market at a time when the dollar was widely perceived to be
“strong.” And it was indeed strong against other currencies. Normally, if the dollar is strong
gold would go down, not up.

So what was going on?

Anyone puzzled by such riddles should read James Rickards’ “The New Case for Gold.”
One of its points: Gold, now as always, is money, a more stable form of money than fiat
currencies. He suggests that, in some not-too-distant future, the dollar’s value could
weaken to such an extent that an ounce of gold could cost $10,000, compared with $1,250
today.

To hedge against the possibility of such a dollar plunge, he recommends that
investors hold physical gold as 10% of their portfolios.

Mr. Rickards is a portfolio manager at West Shore Group in Haddonfield, N.J., and the
author of two other popular books, “Currency Wars” (2011) and “The Death of Money”
(2014). He has advised the Pentagon on international economics and appears on
television from time to time. He can claim to be a relatively independent observer even
as his forecasts make gold bugs slaver.

Like other gold proponents, he notes that gold is unique among all the natural elements.
It doesn’t rust, corrode, or turn to gas or liquid at certain temperatures. It is not
radioactive. It has few industrial uses other than jewelry. It is virtually indestructible.

Although governments seldom talk about gold as money, they still treat it as such. They
count it as part of their monetary reserves and go to great expense to store it in safe
places like Fort Knox. The super-secure vault under the New York Federal Reserve Bank
in Manhattan is compartmentalized to hold gold owned by other governments. When
they sell some, the Fed credits their account and moves the gold into the buyer’s
compartment.

At one point during the Fed’s quantitative-easing experiments in 2013, Mr. Rickards
calculated that if the central bank’s huge hoard of Treasury notes were marked down to
the lower prices then prevailing in the bond market, the losses would exceed the capital
paid into the Fed by member banks.

The Fed, he argued, would be technically insolvent. Unlike private banks, the Fed is not required to mark to market, so this was only a theoretical exercise. It turned out to be wrong, but as Mr. Rickards wryly notes, his error ended up making his point about gold, especially when a Fed official offered a critique of Rickards’ reasoning.

The Fed official pointed out that when Franklin Roosevelt called in the nation’s monetary gold in 1934, the Treasury gave the Fed, in return for the bullion, gold certificates last marked to market at slightly more than $42 an ounce. If you marked those certificates to the 2013 market price of around $1,200, their value would exceed $315 billion, far more than enough to keep the Fed fully capitalized.

From this riposte Mr. Rickards infers that, in a dollar crisis, the Fed itself still believes that the dollar is backed up by Treasury gold. “Another name for an implied obligation to support the Fed with gold is a gold standard,” he asserts.

Even so, Fed officials past and present often disparage gold. Mr. Rickards asks: “If gold is
so worthless, why does the United States have more than 8,000 tons? Why do Germany
and the IMF keep approximately 3,000 tons each? Why is China acquiring thousands of tons through stealth and Russia acquiring over 100 tons a year?… Gold is the foundation, the real underpinning, of the international monetary system.”

His assertion may come as a shock to economists who thought the dollar-gold exchange standard was ended by Richard Nixon in August 1971.

China publicly reports ownership of only 1,658 tons of gold. But Mr. Rickards scoured purchase and shipping records and estimates that the real amount is much higher, perhaps more than 4,000 tons. That’s a large share of the 35,000 tons officially held by all central banks. Why?

Mr. Rickards believes that China wants a hedge against a price drop in its huge holdings of U.S. Treasurys. If the world monetary system threatens to collapse and has to be reformed, China will thus “have a prime seat at the table.”

How likely is such a collapse?

Dangerously so, Mr. Rickards thinks. He is highly critical of the Fed’s experiments with zero-bound interest rates and quantitative easing. The Fed, he says, is trying to maintain “equilibrium” in the sense that a pilot maintains an airplane’s equilibrium by manipulating the engine thrust, ailerons and tailfins. Crises keep happening because the “Fed is sitting there in the cockpit trying to fly the airplane, but it’s not an airplane—it’s something far more complex.”

The great economic philosopher Friedrich Hayek, among others, has explained how trying to “manage” complex systems, rather than allowing markets to work, invariably brings woe. The
“stimulative” low-interest rate policies of central banks have caused global debt to soar by some $57 trillion over seven years to a point where it is now three times global production.

Excess debt exerts strong deflationary pressures, and major central banks are now fighting those pressures with such measures as negative interest rates. Mr. Rickards likens such moves to a tug of war between inflation and deflation. If inflation wins, as the Fed wishes it to, the dollar may cheapen dramatically. And its role as the world’s dominant reserve and trading currency will weaken.

Gold is good insurance, whichever way things go, writes Mr. Rickards. Inflation will send the gold price up, if not to $10,000 then to a level that reflects gold’s historical role as a stable measure of value. If deflation wins, the dollar price of gold will go down, but its constant real value means that other asset prices will likely fall more. “The New Case for Gold” reminds us that wayward policies bring about a search for money that is good as gold.

What better than gold itself?