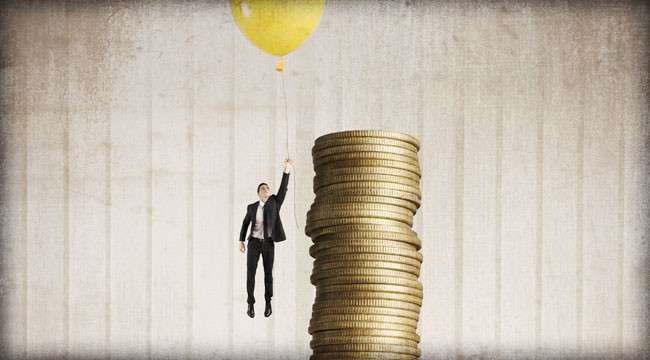 Why Gold Won't Protect You from Inflation

I was in St. Kitts last month for the Liberty Forum conference, where I was a speaker. I also moderated a debate pitting Peter Schiff against Harry Dent on the inflation-deflation question.

Things got really hot. There was some yelling, and at one point, Harry stood up and tossed his mic in frustration. I thought they might go at it.

I want to tell you about this debate…

Peter Schiff is the chief strategist at the brokerage firm Euro Pacific. He has a radio show and has written some books. He’s probably most known as calling for a collapse in the dollar and being generally bearish on the U.S. economy.

Harry Dent is also a well-known financial commentator. He writes a newsletter and is author of several books. He’s probably most famous for his predictions based on demographics. He’s also a vocal deflationist.

Inflation here means generally rising prices. Deflation means prices are generally falling. There are other consequences associated with each. For example, Peter believes interest rates will rise. Harry thinks they will fall. Peter thinks the dollar will lose value, Harry thinks not.

Peter’s argument essentially was that the Fed is printing a lot of money and would continue to do so. Hence, inflation.

Harry’s argument was that the debt deflation dynamics were the more powerful force. The economy has to delever, and as debts are repaid or written off, that process destroys money, more than offsetting the printing press.

They touched on a lot of other things in the course of the debate — past hyperinflations, China’s role and more.

The debate started out calmly enough, but after about 20 minutes, they really starting going at it.

Harry won the debate, in my view. He had a good command of the facts and presented them well. I had also watched the presentations of both before the debate. Harry had marshaled an impressive array of evidence and made a good argument.

My respect for Harry went up. For whatever reason, I had thought of him as a bit of a quack, but he has done a lot of good work on this stuff.

Before 2008, I was solidly in the inflationist camp. But think about what’s happened since 2008. If I told you back then that the Fed’s balance sheet would balloon fivefold — creating lots of money — what would you have guessed the world would look like in 2013?

So something is clearly not right with the “Fed’s printing money and we’re going to have inflation” argument. At some point, you have to re-evaluate the way you look at the world. Or you just sit content to be wrong. In financial markets, that can be costly.

In this light, I appreciated Harry’s efforts, as his framework was the more challenging one to believe, but it has unquestionably been a better predictor of what’s happened post-2008.

Even in the course of this debate, though, it struck me how many assumptions get passed off as givens.

For example: Commodities will protect you in times of high inflation.

Well, they don’t have a history of doing that.

As James Montier of GMO points out in his most recent research note:

“Commodities are often seen as an inflation hedge; however, this is almost entirely due to the experience of the 1970s and the creation of OPEC, and the domination of energy in the generally used commodity indexes. If you had held the ‘wrong’ commodities, their inflation hedging performance would have looked very different (witness copper and grain).”

Here is the chart: 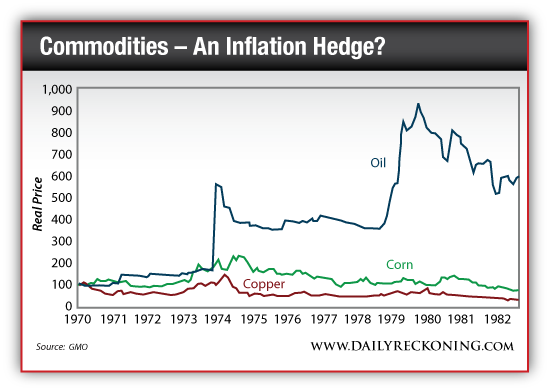 So during the highly inflationary 1970s, oil was a great investment, but copper and corn were terrible. Commodities generally have lost value over the last century at the rate of almost 2% annually, according to GMO. Yet I see it repeated again and again by various advisers telling their clients/readers to own commodities to protect against inflation.

The same is true of gold.

“Gold is often held up as an inflation hedge. However, the data provide a challenge to this view. [The next chart] shows the decade-by-decade average inflation rate, and the real return to holding gold over the same decade. It doesn’t make pretty viewing for those who believe gold is an inflation hedge. That perception is down to one decade (the 1970s) when it held that inflation and gold were positively correlated. The rest of the time there isn’t a good relationship between gold and inflation.”

And here is the chart: 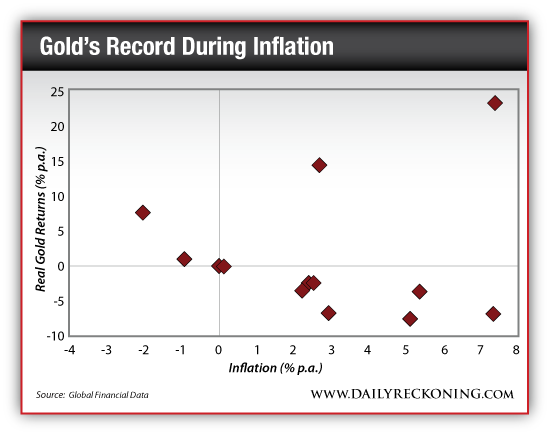 Yet people repeat — on faith, I guess — that gold will protect them during inflation. The record of gold on this front is spotty. It might. It might not.

Montier’s paper, by the way, concludes that there aren’t any good inflation hedges in the short term. But over the long term, stocks and real estate are good inflation hedges. (He says the best is TIPS — Treasury inflation-protected securities.) In fact, Montier shows that even in countries that have suffered high inflation (or even hyperinflation) in the 20th century — such as Germany and Italy — stocks still delivered positive real returns. And real estate value correlates with replacement costs, which rise during inflationary times.

After the debate, I sat on a panel with several other speakers. Asked if we’d have inflation or deflation, my first answer was an honest one: “I don’t know.” Forced to guess, I think we have deflation first, inflation later.

In general, the long-term way to bet is that the U.S. dollar in your pocket will buy less tomorrow than today.

Even Harry’s own presentation had a chart that makes it hard to argue any other way: 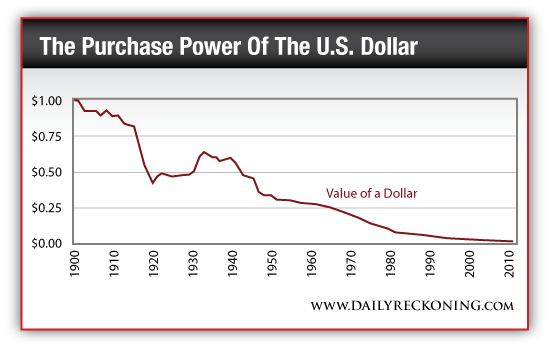 Whatever you do, though, don’t let an old assumption pass uncontested. If you think there’s going to be inflation, you could at least be in the right things. And keep an open mind as to what may happen in 2014. The only certain thing about investing is that there are no certainties. That was my main takeaway from the fiery debate in St. Kitts.

P.S. “I buy on the assumption,” Warren Buffett once said, “that they could close the market the next day and not reopen it for five years.” These days, you never know what’s down the road. That’s exactly why I’ve come up with an incredible strategy that can help you make a ton of money by doing practically nothing. Many successful investors are already using this strategy to build their fortunes, and in today’s Daily Reckoning, I gave readers a chance to check it out for themselves. Just one little perk of being a member of the FREE Daily Reckoning email edition. Don’t miss another issue. Sign up for FREE, right here.