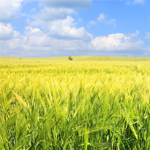 Opportunities abound in feeding the world, from farmland to irrigation to processing crops to boosting the nutritional content of basic foods.

The outline of the story rests on a couple of estimates: a 30% increase in world population by 2050, which would necessitate a 70% increase in food production. Even if those numbers turn out to be only close-to-right, they provide a reliable base to build on, investment-wise.

Although this story is a long-term one, there are a few things happening right now that make opportunities in agriculture more urgent. On this topic, my friend Brad Farquhar at Assiniboia Capital in Regina, Saskatchewan, sent me a couple of interesting things over the weekend. Assiniboia Capital manages the largest farmland fund in Canada. As such, Brad is a great source of insight on agricultural markets. I’ve quoted him many times over the years.

Anyway, Brad sent over a newsletter called the Global AgInvesting Quarterly. The letter’s main story is on drought and how it will impact harvests this year. The US just had the worst drought in 50 years. Citing the US Drought Monitor, at the end of August, GAI Quarterly notes:

As a result of these severe drought conditions, the USDA recently cut harvest forecasts for corn and soybeans by 25% and 18%, respectively.

But it is not just the US that Old Man Drought has drained dry. Russia, India and the EU are all struggling with dry weather as well. The GAI points out that drought in Russia will slash this year’s wheat harvest by one quarter, while drought in Southern Europe will reduce the corn and soy crops in Serbia and Bosnia by at least 50%. In India, this year’s dry monsoon season has reduced the nation’s rise crop by 6%, compared to last year. GAI Quarterly speculates, with evidence both anecdotal and empirical, that we’ll see more dry weather in the US Corn Belt — a continuation of a near-term trend.

Meanwhile, the blistering heat that has been a bane to US agriculture has been a boon to Canadian agriculture. Warm weather across the Canadian Prairies has created more prime farming acreage. Brad reports on successful corn and soybean plantings for the first time in Saskatchewan. Brazil is another area that has escaped drought with expected record corn and soybean production.

Dealing with drought means more opportunity for irrigation. Lindsay Corp. is a good play on irrigation. I’ve recommended Lindsay Corp. on two separate occasions to the subscribers of Mayer’s Special Situations. On both occasions, the recommendation produced a double. I think the stock is pricey now, but it is one to watch and grab after the next leg down.

Another stock that plays well with the demand for food is Alliance Grain Traders (AGT:tsx; AGXXF:otcbb). The stock has slipped recently and is below book value of C$13.86 per share and pays 60 cents annually in dividends. At today’s price, that’s 4.7%.

Alliance, you may remember, processes staple foods like lentils, beans and chickpeas — called “pulses.” The company’s headquarters are in Regina, Saskatchewan. (Brad is a shareholder, by the way.) Alliance has facilities in the US, Turkey, South Africa, Australia and China. Long term, I’ve always liked the story here, and my enthusiasm is not diminished by the stock’s tough slog since I recommended it in the summer of 2011.

I visited with the company that summer and have had subsequent discussions with CEO, Murad Al-Katib. Murad always emphasizes his bigger vision for Alliance as a food ingredients company. On its website, Alliance recently posted an excellent presentation that really focused on this aspect of the company. I would like to share some highlights with you here.

Pulses have much to recommend them. In a world where water is a constraint, it takes much less water to produce a pound of pulses than other foods.

Take a look at how many gallons of water we use to produce the following foods:

Pulses, as you see, use the least amount of water. They are also high in protein and fiber, nutrient dense, low fat, gluten free and non-GMO. Pulses also make their own fertilizer by fixing the nitrogen in the soil and require half the nonrenewable energy to produce, compared to crops like wheat. Growing pulses, therefore, also lowers carbon emissions.

Food producers are starting to appreciate these things, as Murad predicted they would. I remember sitting in an Italian restaurant with Murad while he explained how one day food companies would mix pulses with wheat to make pasta. Well, that day has arrived.

Food companies are now making flour with pulses and mixing it to make not only pastas, but baked goods, snack foods and other packaged goods. Doing this allows them to boost the nutritional content of many foods. Look closely at the photo below, for example, especially the ingredients.

Yes, “legume flour blend” — you’ll see more of this, I guarantee it. And once one food producer like Barilla does it, they’ll all follow suit. After all, they can’t let a competitor make all those claims about their healthy pasta, while they stick to old-fashioned wheat flour!

So this is an exciting story. As Alliance is a global leader in processing pulses, it should see plenty of business in the years ahead. Traditionally, the markets of South Asia, Latin America and the Middle East and North Africa have been the main drivers. But the new emphasis on pulses as a food ingredient, and a water-efficient, protein-rich crop, opens up new markets in Europe, the US and China.

Meanwhile, Alliance has a global network second to none, which Murad and his team have put together over the last dozen years. This network gives it tremendous advantages in market intelligence, logistics, market diversification and its ability to manage risks.

The company has a great future. I have a lot of confidence in the management team, particularly its founder-in-chief, Murad Al-Katib. Insiders own a third of the stock. And I can tell you that Murad takes it personally that his stock is beaten up so badly. He is motivated to make good for his shareholders (of which he is one, and he has most of his net worth invested in Alliance).

Alliance is a buy and a long-term core holding. Buy some, sit on it, collect the dividend and watch the story unfold.

Chris Mayer,
for The Daily Reckoning