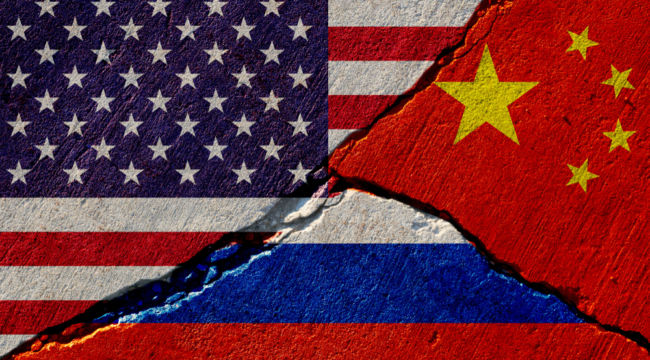 There’s no need to rehash the sordid politics of the U.S.-Russia relationship since 2014. That relationship became collateral damage to gross corruption in Ukraine.

The U.S. and its allies, especially the UK under globalists like David Cameron, wanted to peel off Ukraine from the Russian orbit and make it part of the EU and eventually NATO.

From Russia’s perspective, this was unacceptable. It may be true that most Americans cannot find Ukraine on a map, but a simple glance at a map reveals that much of Ukraine lies East of Moscow.

Putting Ukraine in a Western alliance such as NATO would create a crescent stretching from Luhansk in the South through Poland in the West and back around to Estonia in the North. There are almost no natural obstacles between that arc and Moscow; it’s mostly open steppe.

Completion of this “NATO Crescent” would leave Moscow open to invasion in ways that Napoleon and Hitler could only dream. Of course, this situation was and is unacceptable to Moscow.

Ukraine itself is culturally divided along geographic lines. The Eastern and Southern provinces (Luhansk, Donetsk, Crimea and Dnipro) are ethnically Russian, follow the Orthodox Church and the Patriarch of Moscow, and welcome commercial relations with Russia.

The Western provinces (Kiev, Lviv) are Slavic, adhere to the Catholic Church and the Pope in Rome, and look to the EU and U.S. for investment and aid.

Prior to 2014, an uneasy truce existed between Washington and Moscow that allowed a pro-Russian President while at the same time permitting increasing contact with the EU. Then the U.S. and UK overreached by allowing the CIA and MI6 to foment a “color revolution” in Kiev called the “Euromaidan Revolution.”

In response, Putin annexed Crimea and declared it part of Russia. He also infiltrated Donetsk and Luhansk and helped establish de facto pro-Russian regional governments. The U.S. and EU responded with harsh economic sanctions on Russia.

Ukraine has been in turmoil (with increasing corruption) ever since. U.S.-Russia relations have been ice-cold, exactly as the globalists intended.

This aid was amplified by a four-year, $17.5 billion loan program to Ukraine from the IMF, approved in March 2015. Interestingly, this loan program was pushed by Obama at a time when Ukraine did not meet the IMF’s usual borrowing criteria.

Some of this money was used for intended purposes, some was skimmed by the oligarchs, and the rest was recycled to Democratic politicians in the form of consulting contracts, advisory fees, director’s fees, contributions to foundations and NGOs and other channels.

Hunter Biden and the Clinton Foundations were major recipients of this corrupt recycling. Other beneficiaries included George Soros-backed “open society” organizations, which further directed the money to progressive left-wing groups in the U.S.

This cozy wheel-of-fortune was threatened when Donald Trump became president. Trump genuinely desired improved relations with Russia and was not on the receiving end of laundered aid to Ukraine.

Hillary Clinton was supposed to continue the Obama policies, but she failed in the general election. Trump was a threat to everything the globalists, Democrats and pro-NATO elites had constructed in the 2010s.

The globalists wanted China and the U.S. to team up against Russia. Trump understood correctly that China was the main enemy and therefore a closer union between the U.S. and Russia was essential.

Yet, the elites seized on this to concoct a story of collusion between Russia and the Trump campaign. The real collusion was among Democrats, Ukrainians and Russians to discredit Trump. 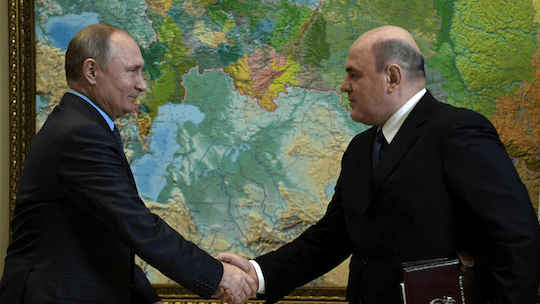 Russian President Vladimir Putin (l.) has recently named a new Prime Minister, Mikhail Mishustin (r.). This is part of a complex government reorganization designed to extend Putin’s rule beyond existing term limits. This is a setback for democracy, but may be a plus for the economy because it adds stability and continuity to Putin’s programs.

This whirl of false charges, cover-ups, and deep state sabotage finally led to Trump’s impeachment on December 18, 2019. Fortunately, the Senate impeachment trial may soon be behind us with Trump’s exoneration in hand (although new impeachment charges and false accusations cannot be ruled out).

Is the stage finally set for improved U.S.-Russia relations, relief from U.S. sanctions, and a significant increase in U.S. direct foreign investment in Russia?

Right now, my models are telling us that Russia is one of the most attractive targets for foreign investment in the world. Just because U.S. policymakers missed the boat does not mean that investors must do the same.

Russia is often denigrated by Wall Street analysts and mainstream economists who know little about the country. Russia is the world’s largest country by area and has the largest arsenal of nuclear weapons of any country in the world.

It has the world’s 11th largest economy at over $1.6 trillion in annual GDP, ahead of South Korea, Spain and Australia and not far behind Canada, Brazil and Italy.

Russia has almost no external dollar-denominated debt and has a debt-to-GDP ratio of only 13.50% (the comparable ratio for the United States is 106%).

In short, Russia is too big and too powerful to ignore despite the derogatory and uninformed claims of globalists. Importantly, Russia is emerging from the oil price shock of 2014-2016 and is in a solid recovery.

The stage is now set for significant economic expansion as illustrated in the chart below from Moody’s Analytics: 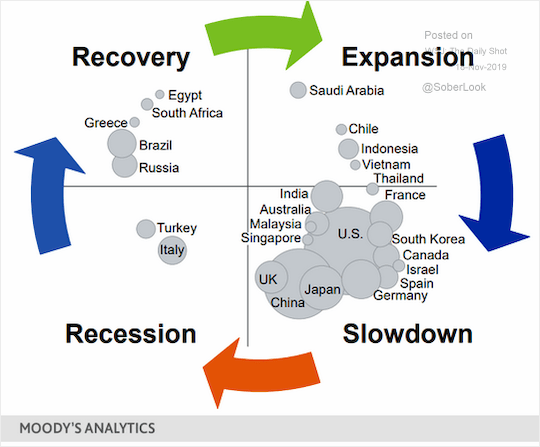 This graphic analysis from Moody’s Analytics divides major economies into categories of Recovery, Expansion, Slowdown and Recession. Economies revolve clockwise through these four phases. The U.S. is in a Slowdown phase with some risk of Recession. Russia is in the Recovery phase heading toward Expansion. The Russian situation is the most attractive for investors because it offers cheap entry points with high returns as the Expansion phase begins.

Russia has also gone to great lengths to insulate itself from U.S. economic sanctions. Their reserves have recovered to the $500 billion level that existed before the 2014 oil price collapse with one important difference. The dollar component of reserves has shrunk substantially while the gold component has increased to over 20%.

With the recent surge in gold prices, Russia’s reserves get a significant boost (when expressed in dollars) because of the higher dollar value of the gold reserves. Gold cannot be hacked, frozen or seized, as is the case with digital dollar assets.

Russia’s fortunes have been improving not only because of low debt and higher gold prices but also because of higher oil prices. The country is poised for a strong expansion, even if U.S. hostility caused by the Democrats continues.

If Trump regains his footing after impeachment and wins a second term (which I expect), investors can expect warmer relations with Russia and an even more powerful Russian economic expansion than the one already underway.