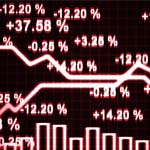 Down the Debt Drain

The US has too much debt. This is no longer a controversial statement. Some may believe other problems are more urgent, or that we need to grow our way out rather than slash spending. But even the most spendthrift pundits acknowledge that the debt-to-GDP ratio of the US must decrease if we are to have a stable, prosperous economy.

The private sector has reacted to this over-indebted reality as you would expect: by deleveraging. Since 2008, households and businesses have extinguished 67% of their debt when measured against GDP. Some paid debt down purposefully, and others defaulted. For our purposes, it doesn’t matter how the debt went away. Only that it did.

Meanwhile, the government has done the exact opposite. It has upped its own borrowing by 52% of GDP since 2008.

As a result of these countervailing forces, the aggregate debt-to-GDP ratio has declined only slightly since 2008. Had the government not stepped in, the US economy would be well on its way to a sustainable debt path. Instead, it has shed a paltry 15% of GDP. In other words, government borrowing largely offset private deleveraging.

Why, in a country that so desperately needs deleveraging, would the government do such a thing?

The typical response is that such a quick and drastic drop in debt would have flung the US into a depression. That’s probably true, as far as it goes. There’s no denying that debt growth correlates strongly with GDP.

But it’s only half the story. And the other half is more important.

Filling the debt gap with just any borrowing doesn’t cut it. In order for debt to aid in economic growth, it needs to be productive. Borrowing for the sake of borrowing is worse than ineffective — it’s destructive. Debt itself is neither good nor bad. It depends on what the borrower uses the money for.

Consider a businessman who borrows money to invest in a new project. If his endeavor is successful, it generates enough income to service the debt and return a profit. His income rises more than his debt. Viewed from a macro perspective, GDP rises faster than debt, and so the debt-to-GDP ratio declines. Paradoxically, he actually reduced the debt-to-GDP ratio by taking on debt. This is good debt.

Then there’s unproductive debt, which is bad. And in times of over-indebtedness, it’s really bad. Think your neighbor buying a TV on credit. He now has more debt with no additional income. He has added to debt, but not productivity. This is bad debt.

The government is the undisputed champion of creating bad debt. Borrowing to spend on weapons, relics (the post office), and losers (Solyndra) does not produce wealth. Even if you argue that some of these expenditures are necessary, they are certainly not productive, in the sense that they add only to the debt side of the ledger without even the prospect of producing income.

That’s the fatal flaw of the government stepping in to fill the borrowing gap. Government debt is dead weight. It is a detriment without a corresponding benefit. And even worse, it crowds out private investment, accomplishing the exact opposite of its alleged goal of spurring growth.

The borrowing gap should be filled either with productive debt or not at all. Private businesses are indeed beginning to grow credit, albeit very slowly. That’s a good sign, especially for equities — a factor that is shifting the balance between stocks and bonds that investors should have in their portfolios. But glance up at the chart one more time. Government borrowing has metastasized to the point that it consumes a third of all debt in the US, leaving private borrowing precious little room to grow.

All debt is not created equal. If the debt doesn’t produce growth, it’s a waste at best, and a destruction of wealth at worst.

Dan Steinhart,
for The Daily Reckoning