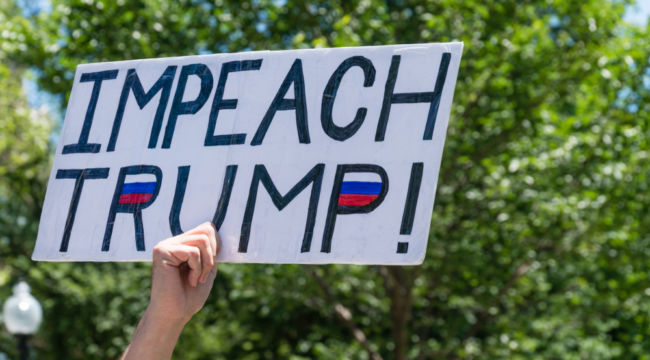 Democrats originally loaded all their freight upon the “Russiagate” wagon car. When its axle snapped earlier this year, their impeachment hopes collapsed in a heap.

But now another has pulled up alongside, bearing news of presidential scandal.

The jubilating politicos transferred their cargo, clambered aboard… and lit out for their original destination:

The impeachment of Donald John Trump.

The bandwagon is presently gathering pace… and passengers.

Will it reach its ultimate destination? Will Democrats impeach the president?

If so, who benefits most?

Trump himself, Joe Biden — or someone else altogether?

Today we summon our courage, hold our nose… and wade into the rancid cesspool of politics.

The entire affair bores us to desperation. So let NBC give the skeleton facts:

Democrats Line up for Impeachment

Two hundred and twenty-one House Democrats and one independent — a majority of the chamber’s 435 members — now favor some kind of impeachment action against President Donald Trump, according to an NBC News tally.

Trump asked [Ukrainian President Volodymyr]Zelenskiy to investigate the 2020 Democratic presidential candidate and his son, Hunter, who had business dealings in Ukraine. Just days before the conversation, Trump had instructed his chief of staff to place a hold on about $400 million in military aid to the country, which is involved in a continuing military conflict with Russia, The Washington Post and other news outlets reported earlier this week and NBC News confirmed.

“Facts” must be gathered. Stories must be ironed out, discrepancies sanded down. And formal charges must be filed.

Months may pass in the interim.

Should charges be filed — which we expect they will — the House must next vote to impeach.

Assume that it does.

It All Comes Down to the Senate

The House can impeach. But only the Senate can convict.

And the Republican Party presently holds a sturdy 53-47 Senate majority.

To win conviction, four Republican senators must turn their coats… and defect to the blue team.

In event of a 50-50 stalemate, the vice president casts the deciding vote.

It is… unlikely the sitting vice president would vote to convict.

But our beat is money. What does impeachment mean for the stock market?

The president has warned the stock market will collapse if he is heaved out.

Yet the market has taken impeachment in fairly comfortable stride — so far.

The Market Is Undecided

The Dow Jones slipped 142 points Tuesday upon news of the impeachment inquiry. But it ended Wednesday 163 points to the good.

Today it gave back 79 points. The S&P lost seven points today and the Nasdaq. 46.

But let us look forward…

We hazard the stock market will be a scene of great volatility these next months — rising and falling with the daily parade of headlines.

Damning blows against Mr. Trump will send investors scurrying for safety. News indicating he will survive the combat intact will bring them back out.

And so it will go, up and down, down and up… until the end of the bout.

But we concede the possibility of a stock market jubilee.

Clinton — William Jefferson — was impeached in 1998. How did the market hold up that year?

But as always… we shall see.

But JPMorgan analysts conclude impeachment’s impact on markets will not be immediate.

It will only develop when a Democratic presidential nominee emerges from the current scrum:

The range of scenarios won’t narrow until Democratic primaries in Q1/Q2 2020 make the Democratic nominee clearer. So definitely an issue worth thinking about, but not an issue worth investing or hedging around yet.

Just so. But which Democratic nominee will emerge? Joe Biden?

Mr. Biden is the target of Trump’s alleged misdeeds. Might Democrats line up behind him in solidarity… and award him the 2020 nomination?

Not one chance, insists our former colleague David Stockman.

David is a former high-level official under Ronald Reagan. He therefore knows a thing — or three — about presidential politics.

Before proceeding, please recall the origins of the latest scandale.

In 2014, then Vice President Biden’s son, Hunter by name, was appointed to the board of Burisma Holdings, a Ukrainian natural gas concern.

The younger Biden was compensated up to a princely $50,000 per month.

But Ukrainian prosecutor Viktor Shokin was sniffing around the company, having whiffed corruption.

Then Vice President Joe Biden allegedly threatened to withhold $1 billion in U.S. loan guarantees unless the Ukrainian president took Shokin off the scent… and ousted him.

Mr. Biden’s supposed rascality would have been contrary to United States law.

But in 2018, Biden boasted before the Council on Foreign Relations that he in fact strong-armed the Ukrainian president.

The man would have his billion… but only if he gave this Shokin the breeze.

He gave Shokin the breeze.

Biden’s Through if Democrats Impeach

Here is David, in his own inimitable style:

[Biden] already flat-out confessed to whacking the Ukrainians with a $1 billion loan cancellation threat unless they fired the prosecutor who was going after the corrupt doings of his son Hunter.

So by opening up an impeachment investigation featuring front and center The Donald’s harmless call with the new Ukrainian president — a nothingburger even stupider than Russiagate — the House Dems have destroyed what remained of Biden’s faltering candidacy.

Indeed, they have guaranteed that the GOP oppo-research machine — along with its auxiliaries at Fox News, talk radio and the conservative blogosphere — will move heaven and Earth to uncover every morsel of the plentitude of dirt and corruption that literally cakes Uncle Joe’s ne’er-do-well son from head to toe.

But if Joe Biden is out… who is in? Who will win the Democratic nomination if not Biden?

Just look at the polls. Bernie has got his ceiling of 10%, the other [candidates] get a couple of points each and the rest is being split between Biden and Warren — who was already coming up fast and actually ahead in many polls of early primary states like Iowa and New Hampshire.

Once [Biden’s] gone, it will be Elizabeth and the Lilliputians — and the latter will soon be competing for the veep, not the Oval.

Sen. Elizabeth Warren is going to be the Dem nominee, and maybe even the next president.

David may well be correct.

But can Ms. Warren topple the sitting president in a general election — assuming he withstands impeachment?

It Comes Down to the Economy

By our lights, the economy will swing the election.

If Mr. Trump can outrun recession until the election, he likely retains his throne.

If not, Elizabeth Warren will become the nation’s first female — though not Native American — president.

She may also dynamite the American economy. But that is a discussion for a different day.