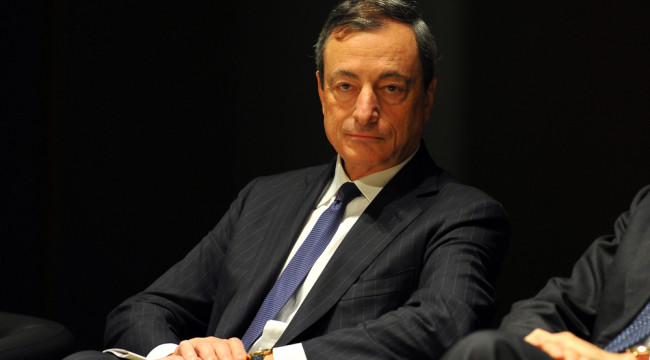 The proximate cause of this hullabaloo was Draghi’s hint that the ECB may go back into the market with more QE.

That and a good report from Mickey D’s was enough to erase the last of this autumn’s losses.

But why would Draghi be ready to expand euro QE?

Maybe he’s been looking at sales figures for the yellow machines.

Caterpillar tells us that not only have sales been falling every month for the last three years, but also that its losses are becoming more widespread. In September, not one of its reporting regions saw an increase.

Either CAT is a terribly mismanaged company (unlikely)… or something else is going on.

It is a nice day here in Lausanne. Cloudy, but not too cold. Or too hot. We have had a good night’s sleep. We are in a good mood.

So let’s take a look at the part of the glass Draghi must be studying – the part that is half-empty.

After all, the former Goldman boy must have some reason to be talking about expanding QE. (We’ll set aside our darker suspicions that it is purely an inside job… the real purpose of which is to help European banks unload more of their mistakes onto the ECB and the public.)

Taking the train from Baltimore to New York, you go through the great metropolis of Trenton, New Jersey. There on the Lower Trenton Bridge, in full view of the passengers, is a faded sign, evidence of the burg’s faded glory: “TRENTON MAKES – THE WORLD TAKES.”

That sign was put up in 1935… when it was true. By the 1980s, Trenton was doing the taking. One of the places from which it took the most was China.

The U.S. was the China of the early 20th century. It was the world’s lost-cost producer, its leading exporter of manufactured goods.

In World War I, it was to the U.S. that Britain – then the world’s leading empire – turned. Britain needed food, fuel, guns, trucks, and everything else necessary to fight a war. The U.S. happily took the orders until Britain went bust.

But that was not the end of the story. After the war, gold continued to come into the U.S., in payment for war debts. Gold was still the foundation of the U.S. money supply. This increase in America’s gold reserves provided the stage for a huge inflationary boom.

The Roaring Twenties was an economic and financial bubble. It was the result of two things: having more money to lend and spend, and central bank manipulation.

In 1927, in the face of a mild slowdown at home (induced by Henry Ford shutting down assembly lines to retool for the Model A), the Fed decided to lower interest rates. As far as we know, this was the first time the Fed intervened in the credit market, seeking to improve the economy.

It was a disaster.

Following the Fed’s move, the U.S. stock market shot up by about 40%. Moms and pops jumped into the stock market, hoping to get rich. Margin debt surged. Factories added capacity. Spending soared. Then the stock market collapsed.

The situation probably would have been resolved fairly quickly had not the spirit of activism also infected the rest of the government.

President Hoover was on the case… followed by President Roosevelt. Both clumsily tried to “do something” to stop the correction. Their actions stretched a normal correction into the Great Depression.

But that is a long story. The story we are telling today is about how monetary “stimulus” sent an economy into hyper-drive, leading to a crash and a depression.

Now, it’s China that makes. Trenton and the rest of the U.S. take. But as leading Asia expert Jim Walker of Asianomics recently told Chris Lowe for Bonner & Partners Investor Network (subscribers can catch up here) China “will be lucky” to grow GDP by between 3% and 5% over the next two or three years.

Many people say China works according to different rules… that it follows a different set of economic principles. Yeah, yeah. “This place is different…”

Our bet is that gravity works in China just as it does elsewhere. After its Roaring 1990s and 2000s, China must be coming back to earth.

Many other things are falling, too. When Chinese factories make less noise, they need less iron ore, copper, and oil. And when they need less of these resources, the countries that provide them have less money to spend. That’s why emerging markets have been sliding for the last year.

But they’re not the only ones. China expanded to meet the demand from its overseas customers – many of them in the U.S. Now, those customers have less to spend. Less money goes to China… its foreign exchange reserves fall… its money supply drops… its economy slows… And the world economy slows with it.

Most likely, that is the meaning of Caterpillar’s latest earnings report – with global sales down for 11 months in a row at double-digit rates.

Most likely, it’s what Mr. Draghi has an eye on, too.