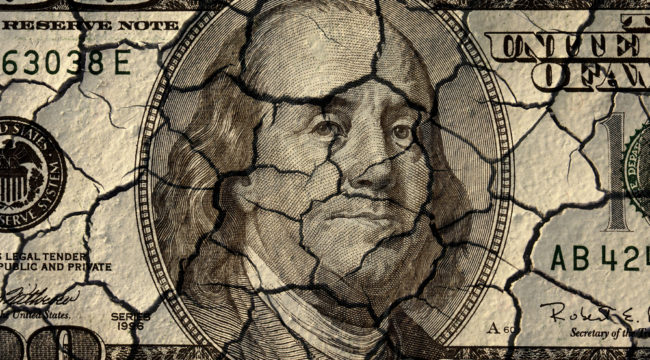 Cracks in Dollar Are Getting Larger

Many Daily Reckoning readers are familiar with the original petrodollar deal the U.S made with Saudi Arabia.

It was set up by Henry Kissinger and Saudi princes in 1974 to prop up the U.S. dollar. At the time, confidence in the dollar was on shaky ground because President Nixon had ended gold convertibility of dollars in 1971.

Saudi Arabia was receiving dollars for their oil shipments, but they could no longer convert the dollars to gold at a guaranteed price directly with the U.S. Treasury. The Saudis were secretly dumping dollars and buying gold on the London market. This was putting pressure on the bullion banks receiving the dollar.

Confidence in the dollar began to crack. Henry Kissinger and Treasury Secretary William Simon worked out a plan. If the Saudis would price oil in dollars, U.S. banks would hold the dollar deposits for the Saudis.

These dollars would be “recycled” to developing economy borrowers, who in turn would buy manufactured goods from the U.S. and Europe. This would help the global economy and help the U.S. maintain price stability. The Saudis would get more customers and a stable dollar, and the U.S. would force the world to accept dollars because everyone would need the dollars to buy oil.

Behind this “deal” was a not so subtle threat to invade Saudi Arabia and take the oil by force. I personally discussed these invasion plans in the White House with Kissinger’s deputy, Helmut Sonnenfeldt, at the time. The petrodollar plan worked brilliantly and the invasion never happened.

Now, 43 years later, the wheels are coming off. The world is losing confidence in the dollar again. China just announced that any oil-exporter that accepts yuan for oil can convert the oil to gold on the Shanghai Gold Exchange and hedge the hard currency value of the gold on the Shanghai Futures Exchange.

The deal has several parts, which together spell dollar doom. The first part is that China will buy oil from Russia and Iran in exchange for yuan.

The yuan is not a major reserve currency, so it’s not an especially attractive asset for Russia or Iran to hold. China solves that problem by offering to convert yuan into gold on a spot basis on the Shanghai Gold Exchange.

This straight-through processing of oil-to-yuan-to-gold eliminates the role of the dollar.

Russia was the first country to agree to accept yuan. The rest of the BRICS nations (Brazil, India and South Africa) endorsed China’s plan at the BRICS summit in China earlier this month.

Now Venezuela has also now signed on to the plan. Russia is #2 and Venezuela is #7 on the list of the ten largest oil exporters in the world. Others will follow quickly. What can we take away from this?

This marks the beginning of the end of the petrodollar system that Henry Kissinger worked out with Saudi Arabia in 1974, after Nixon abandoned gold.

Of course, leading reserve currencies do die — but not necessarily overnight. The process can persist over many years.

For example, the U.S. dollar replaced the UK pound sterling as the leading reserve currency in the 20th century. That process was completed at the Bretton Woods conference in 1944, but it began thirty years earlier in 1914 at the outbreak of World War I.

That’s when gold began to flow from the UK to New York to pay for badly needed war materials and agricultural exports.

The UK also took massive loans from New York bankers organized by Jack Morgan, head of the Morgan bank at the time. The 1920s and 1930s witnessed a long, slow decline in sterling as it devalued against gold in 1931, and devalued again against the dollar in 1936.

The dollar is losing its leading reserve currency status now, but there’s no single announcement or crucial event, just a long, slow process of marginalization. I mentioned that Russia and Venezuela are now pricing oil in yuan instead of dollars. But Russia has taken its “de-dollarization” plans one step further.

Russia has now banned dollar payments at its seaports. Although these seaport facilities are mostly state-owned, many payments, like those for fuel and tariffs, were still conducted in dollars. Not anymore.

This is just one of many stories from around the world showing how the dollar is being pushed out of international trade and payments to be replaced by yuan, rubles, euros or gold in this case.

I believe gold is ultimately heading to $10,000 an ounce, or higher.

Now, people often ask me, “How can you say gold prices will rise to $10,000 without knowing developments in the world economy, or even what actions will be taken by the Federal Reserve?”

It’s not made up. I don’t throw it out there to get headlines, et cetera.

It’s the implied non-deflationary price of gold. Everyone says you can’t have a gold standard, because there’s not enough gold. There’s always enough gold, you just have to get the price right.

The analytical question is, you can have a gold standard if you get the price right; what is the non-deflationary price? What price would gold have to be in order to support global trade and commerce, and bank balance sheets, without reducing the money supply?

There’s no mystery here. It’s not a made-up number. The math is eighth grade math, it’s not calculus.

That’s where I get the $10,000 figure. It is also worth noting that you don’t have to have a gold standard, but if you do, this will be the price.

The now impending question is, are we going to have a gold standard?

That’s a function of collapse of confidence in central bank money, which is already being seen. It’s happened three times before, in 1914, 1939 and 1971. Let us not forget that in 1977, the United States issued treasury bonds denominated in Swiss francs, because no other country wanted dollars.

The United States treasury then borrowed in Swiss francs, because people didn’t want dollars, at least at an interest rate that the treasury was willing to pay.

We don’t know for sure.

But eventually a tipping point will be reached where the dollar collapse suddenly accelerates as happened to sterling in 1931. Investors should acquire gold and other hard assets before that happens.