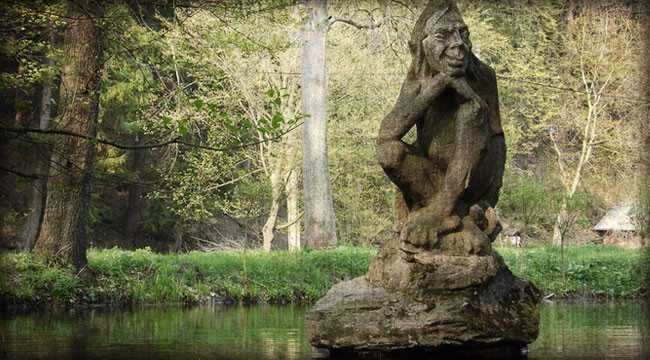 Congressman Confirms the Existence of Hobgoblins

The words of H.L. Mencken rang through my head as I listened to a certain Alabama congressman talk to 40 or 50 shivering supporters the other night: “The whole aim of practical politics is to keep the populace alarmed (and hence clamorous to be led to safety) by menacing it with an endless series of hobgoblins, all of them imaginary.”

The congressman said, “Don’t ever call me moderate” and emphasized that he’s pragmatic. His employer may be broke and $17 trillion in debt, but the thing keeping him awake at night is that foreigners everywhere want to kill Americans.

When he said, “The debt and Social Security don’t matter if we’re all dead,” my jaw dropped.

It is only he, the other wise ones in Washington, and the vast American military machine that stand in the way of each and every one of us having our throats slit by the enemy — whoever that is.

Sequestration, which has brought the budget deficit down, is the urgent problem the pragmatic conservative wants to fix. In his view, the military is being gutted by a president who wants the U.S. to have a Western European-style armed forces.

A military capable only of defending U.S. shores is not strong enough, the congressman said. The U.S. military must be strong enough to not only project strength around the globe, but smash any enemy on their own turf. Invading others is America’s right. “We don’t want any wars fought on U.S. soil.”

When Eisenhower warned us about the military-industrial complex, he was warning us about this representative.

When asked about the government’s precarious finances, he started his answer with defense. Just as defense is being ignored by the current administration, he said, budgets aren’t being passed and government spending is too high. Except what he calls defense the rest of us might call offense.

Asked about immigration, he went on about a big wall that should be built on the U.S.-Mexico border. Until the wall is finished, forget immigration reform because… wait for it… it’s a security issue. The people who want to come here are poor. They only want to steal jobs here, send money back home, and ultimately go back to where they came from. What’s in it for the good old US of A?

As if jobs are something Washington, D.C., passes out to its friends and constituents. The congressman snarled at employers in the private sector who “like cheap labor.”

But he wasn’t done. George W. Bush slowed down the building of the wall, and Obama doesn’t want a wall, for political reasons. The congressman said until we have that wall, we’re not safe.

Ask him about the tea party and he goes on and on about those “knuckleheads.” They just don’t know how to govern. He says they need to watch a film made for eighth-graders called I’m Just a Bill.

What about Obamacare? The typical American may be concerned about the president’s signature legislation, but not him. “The good news is in a year, I don’t think you’ll have to worry about Obamacare,” he said.

The congressman wants you worrying about your security instead.

What Republicans need to do is quit dividing the party by electing tea party kooks and get back to sending more levelheaded pragmatic types like him back to Washington to “govern.” The congressman seemed more than a little concerned a tea party target will be put on his head. If the voters do that, Nancy Pelosi will be in charge, he said. I’m not sure what would be worse. Government will never get smaller or America freer with the likes of him roaming around Capitol Hill doing the people’s work.

Mind you, the small audience of local pols, neocons, and military vets were drinking the congressman’s Kool-Aid with as much polite enthusiasm as could be mustered in the cold night air. Liberty was not on their minds as much as the fear of foreign government spying and cyberthreats.

Yeah, the local gentry is properly alarmed, putty in his hands.

“The most dangerous man to any government is the man who is able to think things out… without regard to the prevailing superstitions and taboos,” Mencken wrote. “Almost inevitably, he comes to the conclusion that the government he lives under is dishonest, insane, intolerable.”

What’s his name? It doesn’t matter, there are dozens like him. That’s where we are — insane on the verge of intolerable.

Douglas French
for The Daily Reckoning

Ed. Note: As long as people are willing to believe the dangerous nonsense spouted by political “leaders” like this Congressman, they will never cease to exist. Don’t be duped by them. Get the facts about your personal and financial freedom, and learn how you can take full control of it. Sign up for the Laissez Faire Today email edition, for FREE, right here to learn how.

What I Told My Dad About Social Security

I was asked a GREAT question at the Paradigm Shift Summit, and I wanted to dive a bit deeper and share the answer with you!