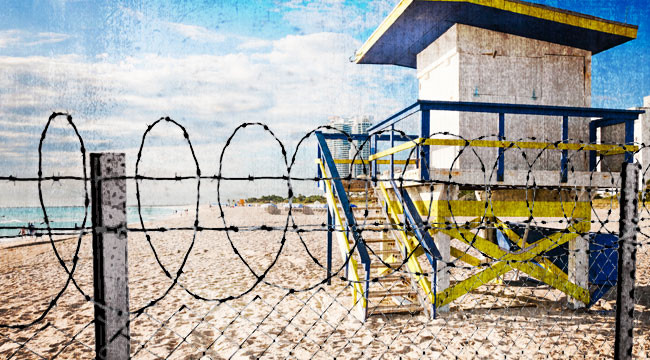 From the moment Barack Obama, the president of the United States, arrived at this plush resort community for a family vacation after another year of hard labor for the American people, it was obvious that security was not a detail.

Seventy hotel rooms had been booked for the president’s secret police (not counting those for the whores). Somber men could be seen everywhere with earpieces and bulging jackets. People on the island generally yielded before them on the sidewalk, out of deference for what they understand are their own bodyguards.

“It’s good to be in Massachusetts again,” the president confided when climbing down from a MV-22 Osprey, a military helicopter-airplane hybrid. “With its tough gun laws, the state of Massachusetts illustrates how common-sense controls can reduce crimes and create a safe gun-free zone for middle-class families like mine.”

A proud Marine was holding the leash of Bo, the “first dog.” Another one was carrying the presidential nuclear briefcase, essential in case a missile launch were necessary during the president’s vacation. On this note, intelligence chatter suggests that the nuclear launch codes had to be recently replaced after somebody leaked them to The Huffington Post.

To an irreverent reporter who asked why he had brought the nuclear briefcase to Martha’s Vineyard, the president explained that it was “a necessary precaution in these troubled times when, without warning, Edward Snowden can fly to Venezuela or the tea party launch another assault on our government.” “Moreover,” he added, “we need to be ready to protect our allies at all times, and this includes the home country of the Nobel Peace Prize committee.”

Asked about the nuclear briefcase, a White House spokesman dismissed the issue by stating that “there is no such thing as a free launch.”

The first family spent an uneventful vacation week, interrupted only by downtown visits, during which roads and streets were duly closed to allow safe conduit to the first household.

One of the president’s daughters caught a little crab on the beach and announced that she would bring it back to D.C. and show it to her private-school classmates. “He is the first crab,” she said proudly, showing the progress of her education as an American Democrat.

A New York Times reporter was one of the very few journalists — and, in fact, one of the very few mortals — allowed to approach the president as he was browsing books at a local bookstore. According to TheNew York Times, the president repeated his recent apologies of the middle class. Holding a book of Aristotle, he explained that “we have to grow our economy from the middle out.” “The middle class,” he added, “is the golden mean of America, the engine of our government, and the cow of the IRS.”

After a week of well-deserved rest, the president flew back to the imperial capital. As his motorcade was speeding through streets and roads closed to plebeian traffic, a few ordinary Americans waved little flags. Crowd-control barriers had been erected to protect people from the president and his men. “Long live the king!” one fan shouted.

“It is important,” Mr. Obama added while climbing back in a Marine helicopter with the first dog, “that the president show the people that he stands with them for social justice, and against all fat cats.”

7 Ways to Survive a Travel Delay

Delays when flying are nothing new. An hour or so isn’t too bad. But some delays can be absolutely horrible… Here’s what you can do.