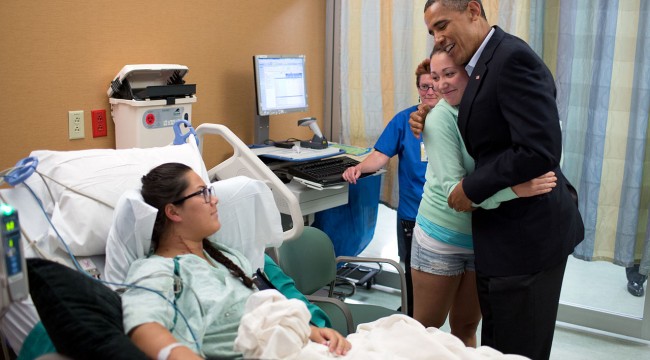 Brace Yourself for Obamacare "Sticker Shock"

It is cool here in Toronto.  A welcome change from Athens, Madrid and Paris.

The markets were cool yesterday too.  The Dow rose 70 points.  Nothing to get excited about, one way or another.

We are sitting in the bar at the Hazelton Hotel. We always thought of Canadians as being a bit more reserved and conservative (socially, not necessarily politically) than their neighbors to the south.

Well, not in this hotel! It is more like Dallas than what we recall from our summers in Nova Scotia.

People dressed in the latest gaudy fashions, loud hip-ish music, trendy design, women who appear to have had extensive body work done… and on the TV screen above the bar is a recurring ad from a zombie law firm advertising for personal injury cases!

We floated our way through Europe’s wine country, foggily trying to keep track of what we what we were seeing.

We surveyed the Greek front with a pitcher of red wine on a blue, paper tablecloth. Greek wine is as mysterious to us as Greek finance — both can make you a little light-headed.  The wine served in the street restaurants of Athens is cheap and plentiful.

In Madrid, our host insisted on a classic Rioja — a rich, complex vintage. Madrid is a cleaner, more modern, and more sophisticated city than Athens.  The wine is similarly more advanced and reliable.

And in France, a Bordeaux — a St. Emilion or a St. Estephe — usually anchors our red-checkered tablecloth. After the Rioja, and months of drinking Malbec in Argentina, the French wines seem to lack character. They are like the French themselves – subtle and clever.

In Greece, we were there for a financial system meltdown.  It didn’t oblige us.  The scheduled breakdown didn’t happen when it supposed to; the can got booted down the road.

Even after 2 weeks of closed banks and widespread expectation of a financial crack-up, we saw no sign of panic. Instead, the Greeks were prepared. Bloomberg explained how:

‘My son is a fisherman. Today I took two kilograms of my son’s fish to the butcher. He gave me two kilograms of meat in return,’ [said a restauranteur]. ‘We don’t take money to the bank. The money we earn is spent on supplies and expenses to eat and drink.’

Meanwhile, our sources in Madrid explained…

There is a big movement to throw out the baby and the bath water.  There’s a whole new political party, called “Podemos” (We can!). It came out of nowhere.  It was organized on the social media.  I’ve never seen anything like it.

And I don’t know what these people want…but I don’t think they’re going to as predictable and as flexible as the traditional parties.

Our guess is that Podemos wants to slip Spain’s debts.

Most people will be zombies – if they can get away with it.  Everyone wants wealth, power and status, and they want to get it in the easiest way possible.

So, it really only makes sense for them to support a political party if it promises to give them more than they can get on their own. Or, to put it differently, in a modern democracy, the politicians must promise to give them back more than they take from them in taxes.

If a party only gives back what it takes in from taxes, the zombies get no net gain. And when the politicians promise to run a surplus(!) in order to pay down debts from past spending, the zombie math no longer works. The voters must pay more in taxes than they get in redistributions.

That’s when the logic of modern popular democracy breaks down.  And when that happens, watch out!

Now, back in the New World, we turn our lips to a California wine and our attention to the North America front.

From the New York Times comes news of a big zombie push in the health insurance area. You’ll recall the lay of the land.

Crony lobbyists for insurance companies, pharmaceuticals and the medical industry got together with the Obama team and created “Obamacare.”

The law was so complex and so long that politicians voting for it admitted they didn’t know what was in it.  Only the cronies knew what was in this pudding; they had put the sugar plums in themselves.

The rest of us would just have to wait until we choke on the seeds.

WASHINGTON — Health insurance companies around the country are seeking rate increases of 20 percent to 40 percent or more, saying their new customers under the Affordable Care Act turned out to be sicker than expected. Federal officials say they are determined to see that the requests are scaled back.

Yes, the medical industry is a battleground too.  The zombies are fighting hard – by hook, crook, regulation and legislation – to get even more of your money.

Stay tuned for the next dispatches from the front lines.