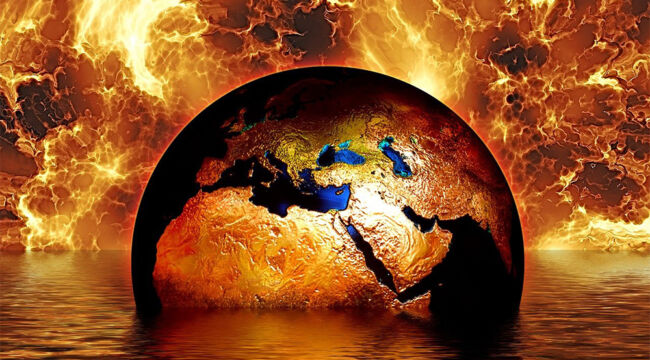 It is proven beyond all doubt, it is a fact beyond all dispute: A climate emergency is upon us.

Earth is down with a mighty fever. Even the polar ice has vanished.

The Arctic seems to be warming up. Reports all point to a radical change in climatic conditions, and hitherto unheard-of high temperatures in that part of the Earth’s surface… The eastern Arctic has steadily gotten warmer, and today the Arctic of that region is not recognizable as the same region of about 50 years ago. Many old landmarks have changed as to be unrecognizable. Where formerly great masses of ice were found, there are now often moraines, accumulations of earth and stones. At many points where glaciers formerly extended far into the sea they have entirely disappeared.

Thus the Arctic sweats and sweats:

Formerly the waters around Spitzbergen [Norway] held an even summer temperature of about 3 degrees Celsius; this year recorded temperatures up to 15 degrees, and last winter the ocean did not freeze over even on the north coast of Spitzbergen.

As well imagine a fire-free hell. Yet the facts are the facts.

To deny the climate emergency is to deny the very nose upon your face… the honesty of congressmen… or gravity itself.

But what is this? Could it be?

Yes, the Arctic was iceless in 1922, should you accept the verdict of The Washington Post.

We have published this information before. But at times we wish to razz the environmental calamity-howlers among us.

They sob that today’s warning has no precedent. Yet it evidently does.

We reckon about climate today because we are informed the United States president, Biden, may soon declare a national “climate emergency.”

A declaration of national emergency is no mere statement. It is the warrant for vastly expanded presidential dictating.

Explains a certain Jean Su, senior attorney for a bunch labeling itself the Center for Biological Diversity:

If he declares a national emergency, it triggers the ability for him to deploy around 130 different powers… One of the most useful for climate is the reinstatement of the crude oil export ban. Shutting that off would actually reduce the incentive for companies from fracking in the Permian Basin.

We must conclude Saudi crude oil is a lesser environmental menace than American crude oil.

Why else would the president choke off domestic production — while pleading with the Saudi king to expand output — which he did last week (unsuccessfully)?

Thus the United States can take oil in. But it cannot dig it up or send it out… lest the heavens fall.

Carbon dioxide is of course the great bugaboo of this climactic tale. We are told it is cooking Earth. Yet is it?

It cannot be denied, today’s carbon dioxide concentrations are far greater than in 1922.

Yet we ordered our minions to investigate the literature. From them we learn:

Of those 100 cases, 99 are not greenhouse gasses whatsoever. They are therefore irrelevant to our inquiry.

Of the one bottle that represents this demon molecule, perhaps 50 milliliters represent mankind’s annual contribution — roughly one shot glass.

And so… of our theoretical atmosphere of 2,400 liters, humans contribute perhaps one shot glass of carbon dioxide per year.

Alternately: Analogize the atmosphere to a 100-story building. The human CO2 concentration rises to the linoleum on the ground floor — no higher.

Yet this relative trifle is scorching the planet? Please submit the authenticated documentation — chapter, verse, line, letter. Do not neglect the footnotes.

Why Didn’t Earth Burn Long Ago?

It is fully plausible that fuel burning has tinkered Earth’s temperature. But a tinkering is not a manipulating.

We concede the science is… complex. Moreover, that it is beyond our slender comprehension.

Yet if Earth’s climate was so exquisitely sensitive to minor carbon dioxide rises… why didn’t it turn to fire long ago?

Our men inform us this planet has previously endured CO2 levels 25 times or greater than today’s.

Yet the match never struck.

The catastrophists warn us nonetheless that we will roast if emissions continue — and that they have models in proof of it.

Garbage in, Garbage Out

Yet do these models give true readings? From a 2020 report by the American Geophysical Union:

The tendency of climate models to overstate warming in the tropical troposphere has long been noted… We focus on the 1979–2014 interval, the maximum span for which all observational products are available…. all 38 models overpredict warming in every target observational analog, in most cases significantly so, and the average differences between models and observations are statistically significant.

All 38 models! Can you believe it? Further razzing comes by way of geophysicist Mr. Allan MacRae:

Even the catastrophists themselves are beginning to cough behind their hands, disappointedly. They concede they were yelling wolf. Science magazine:

The climate models that help them project the future have grown a little too alarmist. Many of the world’s leading models are now projecting warming rates that most scientists, including the modelmakers themselves, believe are implausibly fast.

That is, carbon dioxide is being falsely accused of climate crime — if the information here presented is truthful.

The caveat is necessary because your editor lacks all credentials within the climate sciences. He is, however, skilled in the picking of cherries that confirm his prejudices.

But if not carbon dioxide, what accounts for the changing climate?

We do not know. Yet there is the sun to consider — it gives off a varying glow. Might shifting ocean currents explain it… or wind patterns?

We hazard they might. Again, we do not know. But we slant heavily towards the natural explanation.

Yet largely due to these fantabulists the United States president is preparing to declare a national climate emergency — with the attending dictatorial powers authorized therein.

If the world prefers wind over oil, solar over coal, let it have wind and solar over oil and coal, we say — so long as they are adequate to needs.

Yet the world must evidently come to terms with fundamental physics…

All sources of energy have limits that can’t be exceeded. The maximum rate at which the sun’s photons can be converted to electrons is about 33%. Our best solar technology is at 26% efficiency. For wind, the maximum capture is 60%. Our best machines are at 45%. So we’re pretty close to wind and solar limits. Despite PR claims about big gains coming, there just aren’t any possible.

If this fellow is correct — our minions inform us he is — we begin to suspect we are being taken for a sleigh ride.

They would nonetheless cost trillions and trillions of dollars that could serve far worthier purposes… including the mitigation of whatever nuisances and irritations that may accompany climate change.

Thus we conclude: Going green would sink us all impossibly and unfathomably into red…