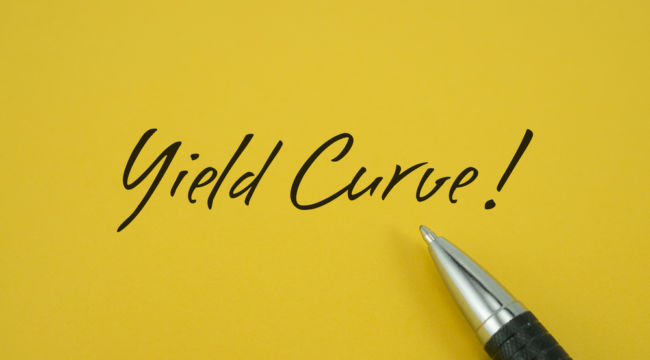 If you’re a regular Daily Reckoning reader, you’ve probably heard of the “yield curve,” and an “inverted yield curve.” A yield curve inversion is a classic recession warning signal. This is a very powerful indicator because it has preceded every recession of the last 60 years.

That means an inverted yield curve has preceded recession on seven out of seven occasions for the past 60 years. Only once did it give a false positive, and that was in the mid-1960s.

And when recessions hit, stocks are vulnerable to crashes. An inverted yield curve has provided warning of every major stock market “event” of the past 40 years.

But a market crash is not an immediate reaction to a yield curve inversion. During the last two major bear markets, for example, the worst of the selling didn’t start until a few years after the yield curve hit zero or negative. So when you hear that the yield curve has inverted, it doesn’t mean you have to run out and sell all your stocks. It can be a very long time before it shows up in the stock market.

But you should watch the Fed. During these bear markets, the selling of stocks coincided with a panicked series of rate cuts from the Fed.

If investors become risk averse and fear an imminent recession, Fed rate cuts cannot stop investors from selling stocks and de-risking their portfolios. It’s important to realize that Fed interest rate policy can only exert control over the stock market if investors maintain a strong appetite for risk.

The change in this yield curve, shown in the green line below, has been substantial thus far in 2020: 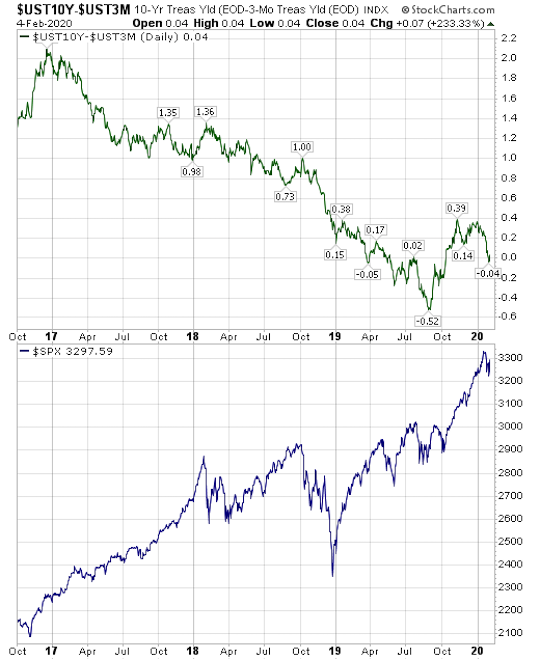 It’s no wonder the fed funds futures market has boosted its probability of a 25 basis point Fed rate cut at the June 2020 meeting from about 15% to 37% in just the past few weeks.

Far ahead of this move in the futures market, my colleague Jim Rickards predicted that the Fed would cut rates 25 basis points at the June meeting in an effort to re-steepen the yield curve. If the Fed doesn’t cut rates soon, then the supply of bank loans is likely to tighten in the months ahead.

Having described these trends, we need to ask: How does the yield curve affect the real economy?

A growing money supply usually means there’s plenty of money flowing through the economy. As this money flows from consumers to producers, it can be used to service outstanding debts that have been made in the past.

U.S. government deficits and Fed balance sheet expansions also add to the money supply, but most of today’s money supply (the so-called “M2” supply) was loaned into existence by the banking system.

As banks’ “net interest margins” compress, they tend to get pickier about what loans they make. And as loan growth slows, money supply growth slows.

The yield curve foreshadows the trend in future bank profit margins, and it doesn’t look bullish.

If banks aren’t earning decent profit margins on new loans, that’s a problem for a highly indebted economy with many borrowers that must constantly refinance their loans.

Within a matter of months, loan defaults can spike. When defaults get bad enough to threaten the banking system, the Fed panics and cuts rates. We haven’t seen many defaults in recent bank earnings reports, but there are concerning trends in credit card defaults.

This credit cycle has lasted an extraordinarily long time because the Fed kept emergency-style monetary policy in place from 2008 up until it started timidly hiking rates in December 2015.

Super-easy policy has allowed an epic boom in credit — especially in corporate bonds — to hit unprecedented heights. The burden of bank debts and bond debts is as big as ever, so the U.S. economy has become less tolerant of a flat yield curve over time.

Many investors have been waiting to sell stocks and de-risk portfolios until six or 12 months past the point of yield curve inversion. Such investors are confident that we’re in the equivalent of 1999 or 2006 in the cycle, so they expected one last “melt-up.”

The sharp rebound in stocks since December 2018 certainly looks like a melt-up, despite the latest concerns about the coronavirus, which have affected the stock market. But the market’s still at or near record highs, depending on the day.

Maybe the market has more room to run. But most stocks have risen long past the point of being supported by valuations and are dependent on more and more new buyers entering the market to continue rallying.

Corporate profits have been getting squeezed for several quarters, but investors largely have not cared. They only care that the Fed reversed its policy course rapidly in 2019, switching to radical easing.

Could another 25 basis point cut in mid-2020 rekindle another wave of speculation?

Perhaps. But the next Fed rate cut would likely be in response to deteriorating credit conditions. And stocks rarely rise under such conditions.

So this is the time to be careful.